Peter Manfredonia Arrested After Days on the Run | Law & Crime 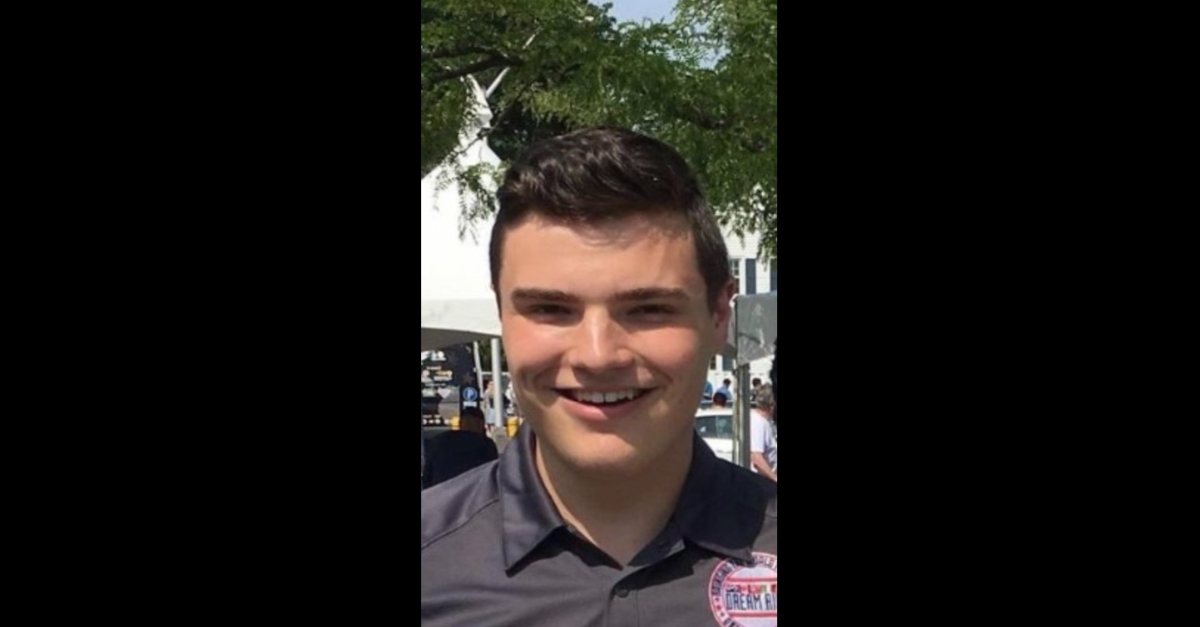 A UConn senior who allegedly murdered two men, injured a third, committed a home invasion and a kidnapped a woman has been caught in Maryland on the sixth day of a frantic search for his whereabouts. Peter Manfredonia, 23, was arrested in Hagerstown, Maryland on Wednesday, Connecticut Police said.

Authorities said the first crime of a days-long crime spree across state lines occurred last Friday, May 22. A timeline of the events said that authorities received a 911 call at 9:01 a.m. about a disturbance in the town of Willington, Connecticut. Troopers responded to the scene and found 62-year-old Theodore “Ted” DeMers dead, they said. The murder weapon was said to ebe a machete. DeMers offered Manfredonia a ride after the suspect’s motorcycle broke down, according to a source close to the investigation and cited by the Connecticut Post. A second man tried to help DeMers, but was critically injured, cops said. Authorities described him as now being in stable condition.

Cyndi DeMers, who was married to Ted for 42 years, described the injured man as an elderly neighbor, according to The Hartford Courant. A source in the Courant report said that the Manfredonia was on the way to see an ex-girlfriend when his motorcycle broke down.

Police in Derby, Connecticut reported that an abandoned vehicle was discovered Sunday morning. This was registered in Willington, close to the scene of the Friday slaying.

Cops arrived at that Willington residence and busted their way into the home after they weren’t able to contact the homeowner. According to cops, troopers discovered that Manfredonia had committed a home invasion, stealing guns and a truck.

Derby cops said they later received a 911 call for a well-being check on a person on Roosevelt Drive. Police reported the worst case scenario: the man was found dead at the home. Authorities identified the victim as Nicholas Eisele, 23. A woman identified as Eisele’s girlfriend was kidnapped from the residence; a 2016 Volkswagen Jetta was stolen, officers said.

Eisele has been described as being a high school friend of Manfredonia’s.

On Sunday, the Newtown Police Department released the photo you see below of the suspect. They said he was “armed and dangerous.”

**Updated"Connecticut Sate Police continue their search for Peter Manfredonia who is an armed and dangerous. Peter is…

Posted by Newtown Police Department on Sunday, May 24, 2020

From there, Manfredonia allegedly drove to New Jersey. Police said that the stolen Volkswagen Jetta and the uninjured kidnapping victim were found in the Garden State not far from Pennsylvania. The woman, who was found in Paterson, New Jersey, reportedly identified Manfredonia as her “captor.” Police revealed this information on Monday.

Finally, Manfredonia was believed have crossed state lines into Maryland, where he was captured on Wednesday night at a truck stop—reportedly after a foot chase.

Peter Mandredonia was arrested after a foot chase involving a Connecticut State Police detective at about 9 p.m. in Hagerstown, Maryland.

The chase was described as short. Connecticut State Police detectives assisted in Manfredonia’s capture in Maryland.

The motive behind all of this remains unclear.

[Image via via Connecticut State Police]