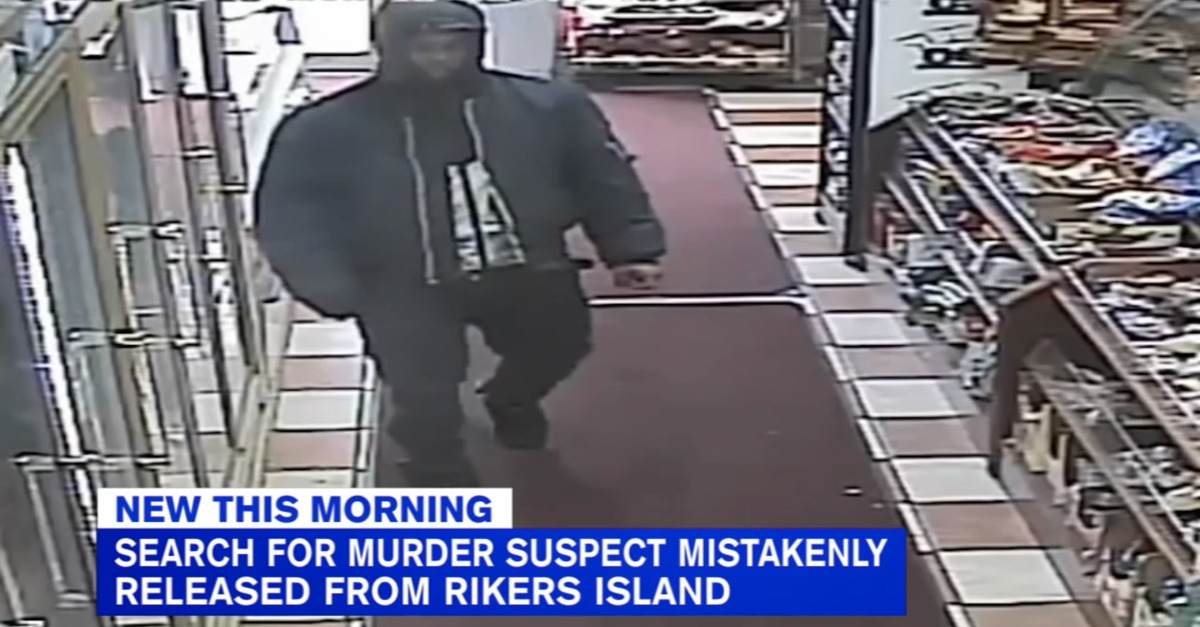 Christopher Buggs, 26, reportedly told a judge to “suck” his “dick” during a virtual court appearance late last month. Instead, the judge held the accused murderer in contempt. Buggs has since been erroneously released from jail.

Accused of killing Ernest Brownlee outside of a bodega in the Brooklyn neighborhood of Bedford-Stuyvesant in Jan. 2018, Buggs had been imprisoned at Rikers Island while awaiting trial.

On Feb. 16, the now-wanted man had a hearing before Brooklyn Supreme Court Judge Vincent Del Guidice and, according to the New York Daily News, after being denied bail on the murder charge Buggs “repeatedly” told the judge, “suck my dick.”

In response, the judge found Buggs in contempt of court and ordered him to serve an additional 30-day sentence—not that it would have particularly mattered; since the defendant was denied bail anyway, he would have been stuck on the widely-criticized penal island until his trial began regardless. But, Del Guidice apparently reasoned, there were legal principles like respect for authority and the comity of the courtroom at stake. The judge’s formal/moral victory, however, eventually gave way to Buggs actually being released.

That criminal contempt charge included time served and the judge allowed Buggs to serve that 30-day sentence contemporaneously. So, when the term on the lesser charge ran out, the defendant was set free—despite his still-pending murder trial. Criminal defendants accused of murder are not typically allowed to post bail.

The Daily News reported that the contempt charge was inexplicably listed as the final resolution of Buggs’s 2018 arrest on murder charges, which allowed for his release early morning Tuesday. The outlet noted that he “was apparently given cash and a [subway card] before boarding a correction department bus.”

New York City media quickly flew into a tizzy about the mix-up.

Local ABC affiliate WABC called the Buggs release a “paperwork error.” The Daily News termed it a “clerical screwup” in their initial coverage and subsequently cited multiple anonymous and “[a]stounded” sources slamming the snafu as a situation that ought to result in heads rolling.

The New York State Department of Corrections and Community Supervision called it an “erroneous discharge.”

“We are aware of this incident, and a full investigation into how this happened is underway,” Correction Department Deputy Commissioner of Public Information Peter Thorne said in a statement. “Right now we are working with our law enforcement partners to return this individual to custody.”

U.S. Marshals are currently leading a manhunt into locating the suspect—who they say is considered to be armed and dangerous.

New York City Mayor Bill de Blasio also gave his word that the issue was being dealt with.

“This is being fully investigated right now,” the outgoing mayor said in a statement. “We are going to put additional safeguards in place to make sure this never happens again. it’s very frustrating. It was based on a court order, but it was apparently one case that this inmate had connected to him, but there were other charges obviously as well that should have meant he remained incarcerated. So we are going to get a full review of this immediately, make whatever changes we have to. In the meantime, we have a high level of confidence that he will be re-apprehended shortly.”