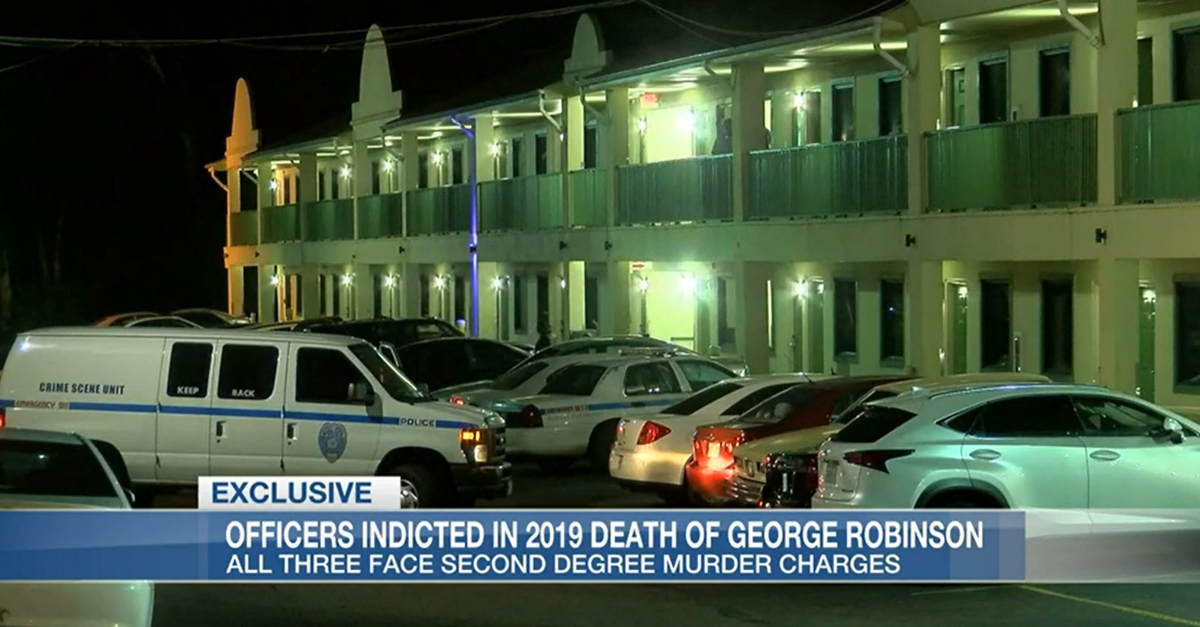 Mustang Motel, where Robinson reportedly went after police confronted him.

A grand jury in Hinds County, Mississippi indicted three police officers for second-degree murder in the 2019 death of George Robinson, 62.

The document was entered in a local circuit court on August and recently unsealed, according to The Mississippi Clarion-Ledger. Desmond Barney, Anthony Fox, and Lincoln Lampley, who each worked for the Jackson Police Department at the time of the incident, reportedly turned themselves in, and respectively posted $100,000, $250,000, and $100,000 bonds.

The Mississippi medical examiner ruled Robinson’s death a homicide in January 2019, said Hinds County Coroner Sharon Grisham-Stewart. Police have said the officers were searching for the killers of a local pastor on the 13th. A detective claimed to witness Robinson making a “hand to hand transaction” with a woman, and there was a lot of money throughout the car, according to the JPD. Robinson refused orders to leave the vehicle and resisted when cops tried to get him out, officials claimed.

Robinson had nothing to do with the slaying of the pastor. He did not commit a crime, was not subject to active warrants, and was no threat anyone, said a lawsuit filed by his family. The man had suffered a stroke, which slowed down his movements, friends said.

Landlord Ronnie Arnold claimed one of the officers said “Get your b**** a** out of the car,” and Robinson told police that he had had a stroke.

“They finally snatched him and dumped him on the ground,” Arnold said. Robinson was handcuffed.

Police said one of the officers saw “minor scratches” on the man’s face, which they said were due to him resisting on the ground. Robinson was cited for allegedly failing to obey an officer and resisting arrest. According to the police account, detectives wanted to get Robinson checked out for injuries, but he said he was fine and wanted to get home. They let him go. Robinson’s family said he drove to a motel where his girlfriend was, but he eventually went to a hospital, and died in intensive care on January 15. Cause of death: suburdal hemorrhage from blunt force trauma to the head.

The indictment says three police officers removed the George Robinson from his vehicle, body-slammed him, and repeatedly struck him in the head and chest. Robinson later died. https://t.co/GY42V2cgyq

Prosecutors blame the officers. So does Robinson’s family.

“Black people are being assaulted by people in blue,” their attorney Dennis Sweet IV said in a June 2020 Clarion-Ledger report. “You can see the root growing all over the country. We have to make sure we take care of our root in our soil and these family members so that we can uplift the rest of the country.”

One of the attorneys for the defendants said they were just doing their jobs.

Internal affairs for the Jackson Police Department said they found no wrongdoing, according to the outlet. The Federal Bureau of Investigation did not find civil rights violations. The Jackson civil service commission determined the officers could return to work. Since Robinson’s death, Barney and Fox joined the Clinton Police Department.

“As the family of George Robinson, we are pleased that the Jackson Police Officers involved in his death have finally been charged with murder,” they said in a statement obtained by WLBT. “For us, the charges prove that George’s life mattered and no one deserves to die the way he did. We are grateful that the District Attorney has taken this action. We have cooperated with the District Attorney’s investigation in every way and will continue to do so until we finally get justice for our beloved George.”