Ammon Bundy Arrested for Failure to Appear After Refusing Mask

‘You Make Your Choice’: Ammon Bundy Arrested in Idaho After Refusing to Wear Mask Inside Courthouse 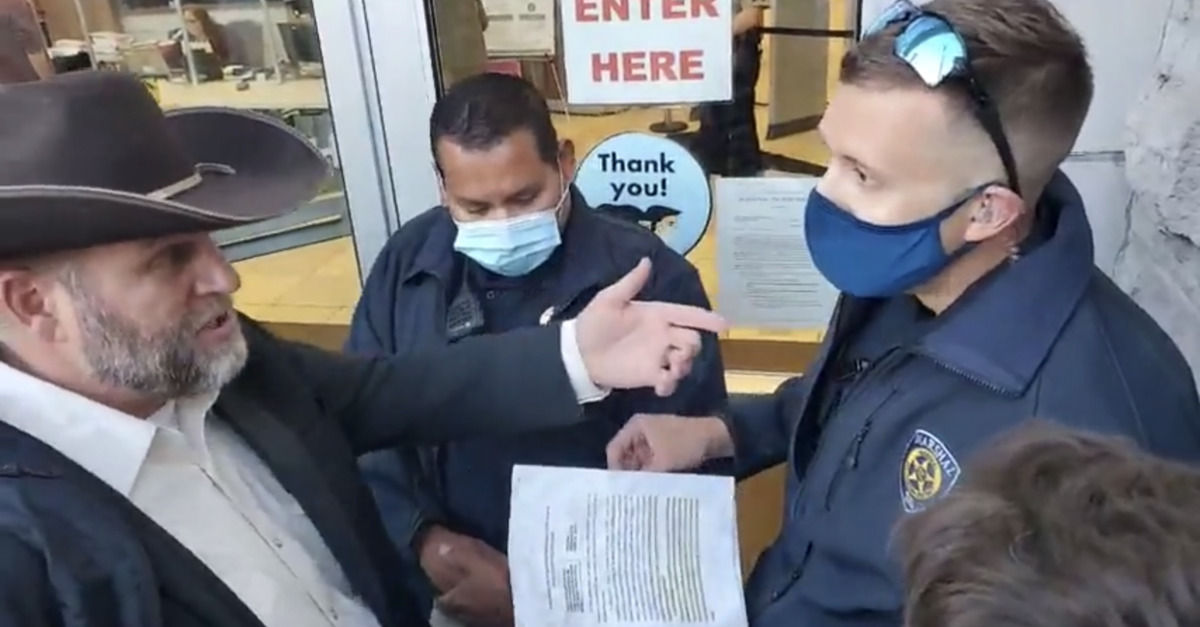 The complex politics of notorious rancher Ammon Bundy took a pandemic turn on Monday when he was arrested on a failure to appear warrant after refusing to wear a mask inside a court building.

The latest in his long and reoccurring line of legal troubles occurred after Bundy and a group of supporters railed against a mask mandate promulgated by the Idaho Supreme Court in April 2020.

Bryan Bowermaster captured video of the nearly three-hour-long stalemate between the right-wing People’s Rights organization and local law enforcement who were enforcing the mask mandate.

“Let us in!” the group chanted as Bundy and others argued with officers guarding the doors. “Let us in! Let us in!”

The majority of the voices heard on the video appear to belong to women—which tracks with an analysis by the Institute for Research and Education on Human Rights. According to the decades-old social justice organization, “People’s Rights has a majority of women in local leadership positions—a first for modern far-right networks.”

“The Constitution says he can’t limit us from coming in,” Bundy tells one of the officers—specifically pointing towards a physical copy of the administrative order issued by a judge that requires all individuals to wear masks inside all Idaho courthouses. “So, you make your choice. Are you going to follow the Constitution? Or are you going to follow an administrative order?”

The officer explains that the judge’s order is binding on anyone attempting to enter the building, and the rancher laughs at him.

Bundy and another man, Aaron von Schmidt, were scheduled to appear for a trial on trespassing charges stemming from an anti-mask and anti-stay-at-home order protest last year. Bundy and dozens of his supporters stormed the Idaho Capitol just as legislators had convened a special session to discuss how to deal with the coronavirus (COVID-19) pandemic.

Most of the protesters eventually dispersed, but Bundy refused to leave and was eventually removed while sitting in an office chair. He was charged with two misdemeanors over the incident.

Neither man made it into court on Monday.

“Deputies arrested Ammon Bundy and Aaron von Schmidt on misdemeanor failure to appear charges after both men defied an Idaho Supreme Court order and refused to wear masks to go into the Ada County Courthouse for their jury trials Monday morning,” according to a press release from the Ada County Sheriff’s Office.

“Both Bundy and Schmidt were at the courthouse Monday morning but refused to participate in the mask mandate required to enter the building, so they did not show up for their trials,” the press release continues, “A judge then issued failure to appear warrants for both men.”

After the warrants were issued, an Ada County Sheriff’s deputy approached Bundy and Schmidt, asking them if they would voluntarily surrender themselves.

“You’re breaking God’s law!” one of the protesters calls out. “God’s watching you, sir!”

The two men refused to comply with the warrant, and a team of deputies then waded into the crowd of supporters to arrest them.

During the brief melee that ensued, shrieks, cries, shouts and sirens created a cacophony as Bundy’s supporters verbally assailed the arresting officers. Two other men allegedly went a bit farther than that, however, and were arrested on misdemeanor charges of resisting and obstructing officers. One of the other men was also charged with a felony count of battery on a law enforcement officer.