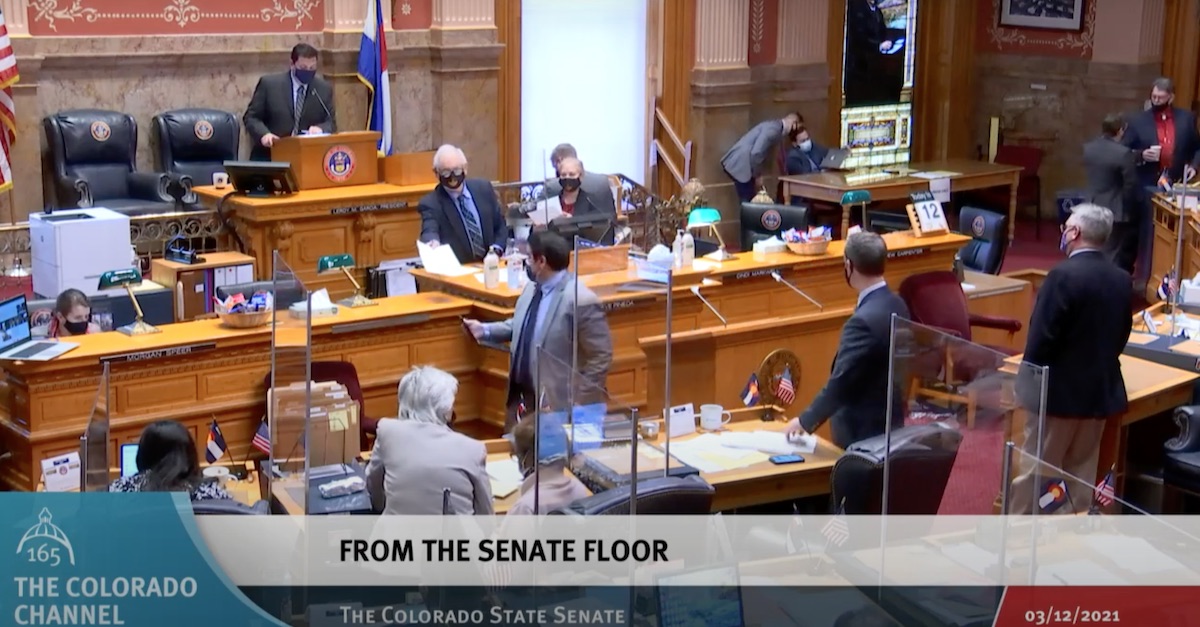 The Colorado Supreme Court ruled 4-3 against State Senate Democrats on Monday in a case over whether computers could be legally used to speed-read bills on the Senate floor.

The case came about as a direct result of political gamesmanship between legislative Republicans and Democrats. You see, the Colorado state constitution provides that all bills be read aloud in their entirety. Knowing this, Republicans rewrote 2,000 pages of oil and gas regulations, then asked that they all be read at length.

Republicans insisted the reading requirement had been made in good faith, for the purpose of inspiring a “conversation between both parties.”

Historically, the reading of a bill at length has lead to a conversation between both parties. We’re asking for that conversation to occur.

The @COSenDem hold the key to bring this stalemate to a close – what will they decide to do? #COpolitics #COleg

Dems insisted the regs weren’t controversial, and that the read-aloud was requested simply to throw a wrench into the gears of government. “Rather than have an honest debate on the issues,” they tweeted about their GOP colleagues, “they’re channeling their inner Ted Cruz to obstruct and are preventing good policies from being discussed on the Senate floor.”

Republicans in the Colorado Senate continue to act in bad faith. Rather than have an honest debate on the issues, they’re channeling their inner Ted Cruz to obstruct and are preventing good policies from being discussed on the Senate floor. #copolitics #coleg https://t.co/xui01aY5Vs

The Republicans parried with some mocking.

GOP: Please talk to us. Your legislation is scaring our constituents and this process is moving too fast for comfort.

Dems responded again, saying they “wouldn’t be surprised if you folks busted out ‘Green Eggs and Ham’ to go along with your temper tantrums.”

At this point, we wouldn’t be surprised if you folks busted out “Green Eggs and Ham” to go along with your temper tantrums. #copolitics #coleg https://t.co/8qO5reYHVS

Democrats went beyond a Twitter battle, though. In an epic “be careful what you wish for” move, they retaliated by having multiple computers read the regulations aloud at the lightening speed of 650 words per minute.

So far at #coleg today…

1) Senate Rs demand a 2000-page bill be read at length in order to slow down the D majority.
2) Ds respond by having ***five computers*** read it, cutting the time needed from days to hours.

Republicans responded to the auditory mess with a little Dr. Suess of their own.

Republicans sued and won. The court issued an injunction preventing Democrats from using the computers to speed-read, and issued an order that the Senate Secretary “employ a methodology that is designed to read legislation in an intelligible and comprehensive manner, and at an understandable speed.”

“We therefore agree with the district court’s determination that the unintelligible sounds produced by the computers did not fulfill the reading requirement,” wrote Samour. The court affirmed the lower decision only in part, however, because it concluded that “it was not within the district court’s domain to dictate the form or manner by which the legislature may comply with the reading requirement.” In other words, the court was correct in ruling that the computers had been a bad choice, but it shouldn’t have directed the Senate Secretary to do anything specific.