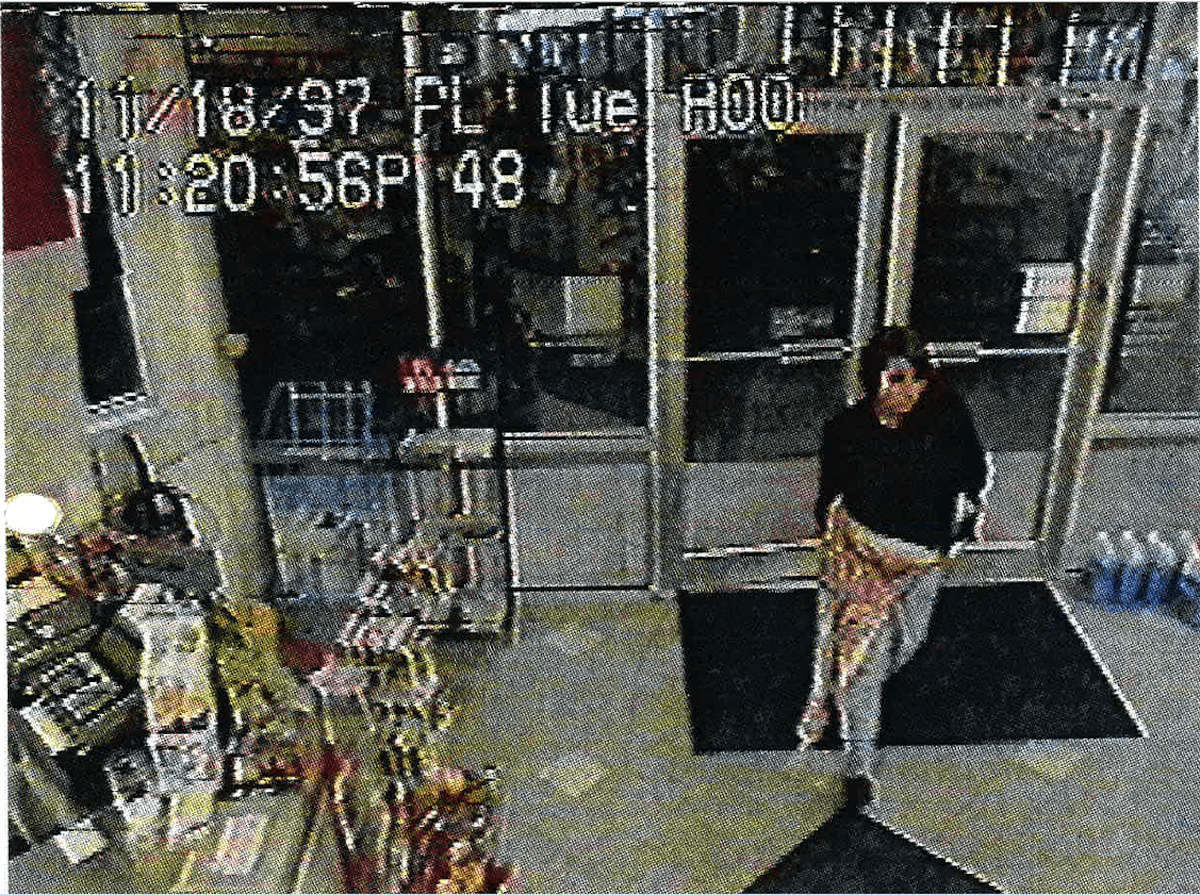 A surveillance image from a Seattle gas station in 1997 captured the woman believed to be Christine Marie Warren. (Image via the Seattle Police Department.)

King County, Washington prosecutors have charged a Seattle woman with second-degree murder over the death of her newborn baby boy in 1997. Law&Crime initially covered the woman’s arrest on Saturday.

According to a probable cause certificate, police believe the woman, Christine Marie Warren, now age 50, was captured on gas station surveillance video walking into a Chevron station on November 18, 1997. A witness subsequently came forward and said she saw a woman — believed to be Warren — exit a white vehicle and walk into the gas station shortly before midnight on Nov. 18 with a blanket wrapped around her waist. The witness held the door for the woman now believed to be Warren; the woman headed straight for the bathroom and remained inside for 15 minutes. The witness said she heard a baby crying from the restroom while making a purchase.

The surveillance footage showed the woman believed to be Warren entering the store at 11:20 p.m. and leaving at 11:34 p.m.

A gas station clerk found blood on the sink, toilet, and floor but did not immediately find it “unusual for a public service station bathroom.” He cleaned and sanitized the room but did not take out the garbage.

A gas station clerk who emptied the trash two days later, on Nov. 20, saw the infant’s body through the clear plastic trash bag into which it had been disposed. The child eventually became known as Baby Doe. Though authorities “initially ruled” the baby boy’s death “to be natural,” an autopsy indicated that “[t]he child was born live” and that the case should be deemed a homicide. The cause of death was unclear, but the King County Medical Examiner’s Office said the 7.7-pound baby was delivered full term and died after it was born.

DNA evidence was recovered from the baby’s placenta, which was still attached.

The community raised money to provide the baby a funeral and a headstone.

Though investigators developed a DNA profile for the child’s mother in the late 1990s, it wasn’t until 2018 when authorities re-examined the case and began trying to track down the infant’s mother. A group of six possible relatives were ultimately identified using the open-source DNA website GEDmatch. Detectives sent Warren a gift card and an invitation to participate in a survey for a fake “flavored-water beverage” they called “Sparkling Icy.” When Warren signed the survey and licked the envelope, court documents say investigators processed the DNA and discovered a match.

“Warren admitted that she was the mother of Baby Doe, that she gave birth to the baby in the gas station restroom, and that she abandoned the baby in the restroom trash can,” court papers say. They continue to explain Warren’s version of what occurred: 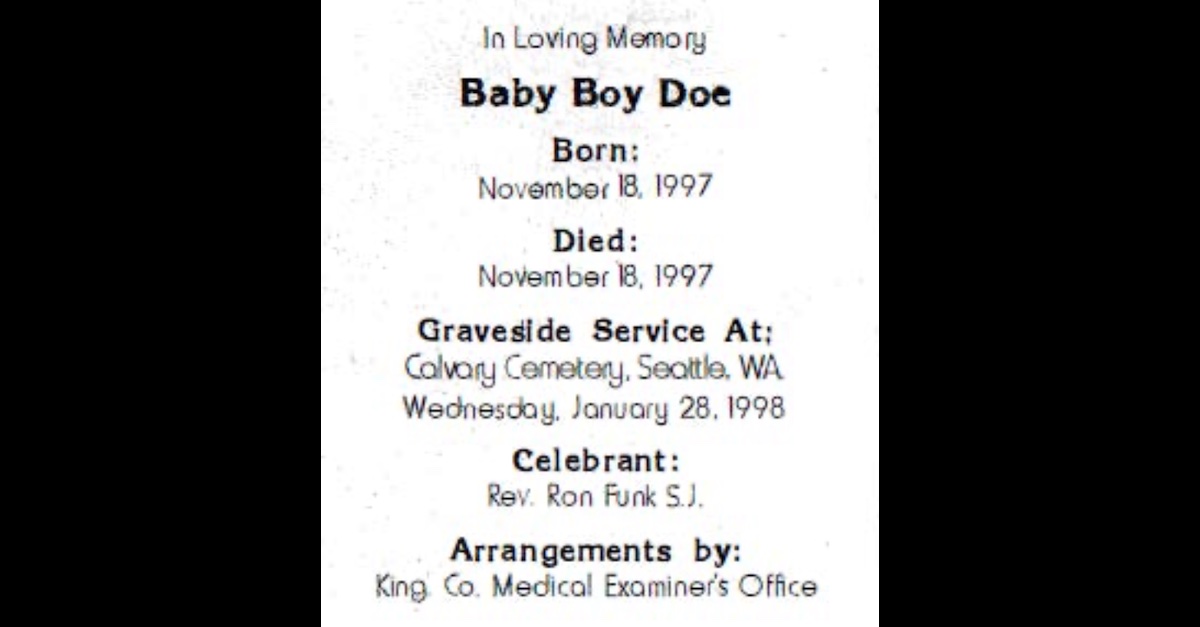 Although newly filed court documents indicate that authorities combed through several possible suspects before narrowing in on Warren, authorities previously told a Seattle television station that Warren had personally and “voluntarily put her DNA in the open genealogy databank, and opted not to make her data private.” That suggests the match was easier than usual for investigators handling the matter.

Under Washington State law, Warren is accused of second-degree murder on top of Abandonment of a Dependent Person in the First Degree. The murder statute is Washington State’s version of the felony murder rule, which automatically ratchets a death which occurs during the commission of an underlying felony up to the level of murder. It reads:

(1) A person is guilty of murder in the second degree when:

(b) He or she commits or attempts to commit any felony, including assault, other than those enumerated in RCW 9A.32.030(1)(c) [first-degree murder], and, in the course of and in furtherance of such crime or in immediate flight therefrom, he or she, or another participant, causes the death of a person other than one of the participants.

Second-degree murder is a Class A Felony punishable by up to life in prison and a fine of up to $50,000.  However, in this case, prosecutors have suggested a more likely sentencing range of between 123 and 220 months based on other factors which influence this particular defendant’s sentencing score under state law.

The underlying Abandonment of a Dependent Person in the First Degree statute reads (relevantly) as follows:

a person is guilty of the crime of abandonment of a dependent person in the first degree if:

(b) The person recklessly abandons the child or other dependent person; and

(c) As a result of being abandoned, the child or other dependent person suffers great bodily harm.

Warren is due to enter a plea on March 29 at the King County Courthouse. She was released from jail on Monday, March 15 after posting $10,000 bail, which was the amount requested by prosecutors and the amount agreed upon by a judge earlier that day.

In the years since Baby Boy Doe’s death, and in an effort to avoid such tragedies, all 50 states have passed laws which allow parents to leave newborn babies at qualified facilities — no questions asked. In Washington State, such facilities include hospitals and fire houses. Law&Crime explained those laws in detail on Saturday.

[Editor’s note: this piece has been updated to clarify the sentence prosecutors anticipate in this case.]