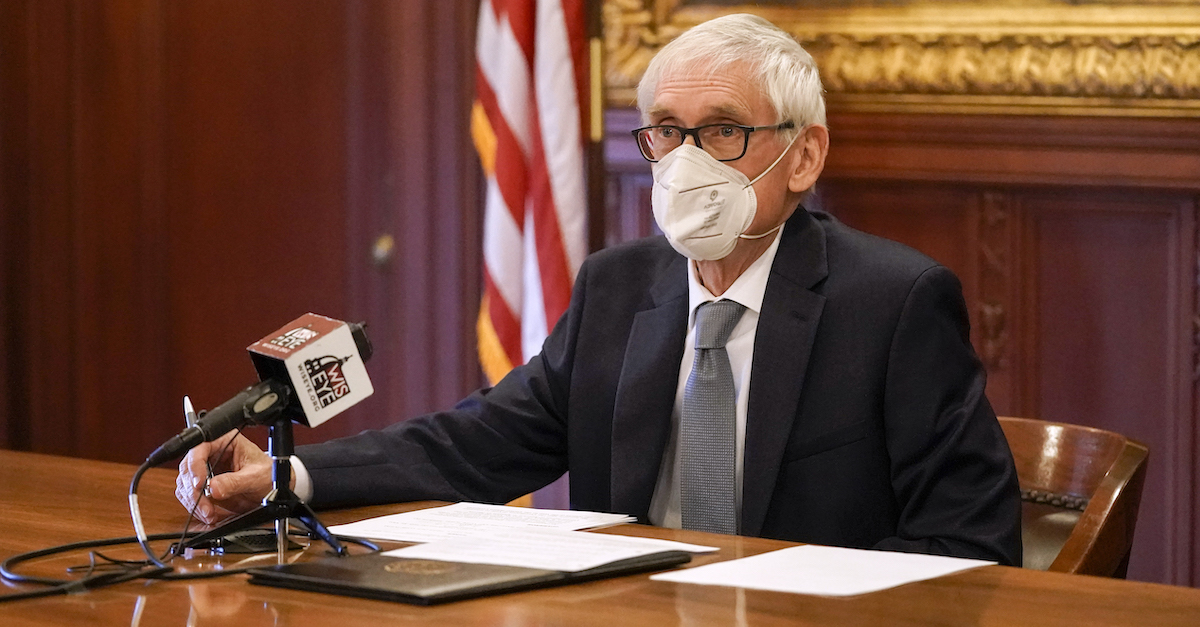 The Wisconsin Supreme Court handed Gov. Tony Evers (D) a 4-3 loss on Wednesday on the issue of the state’s mask mandate, finding that three of the governor’s executive orders were “unlawful.”

Brian Hagedorn, a conservative justice who was attacked by Donald Trump in December for refusing to disturb the 2020 election results in Wisconsin, delivered the majority opinion of the court. He was joined by Justices Patience Roggensack, Annette Ziegler and Rebecca Grassl Bradley. Justice Ann Walsh Bradley dissented and was joined by Justices Jill Karofsky and Rebecca Dallet.

The majority’s conclusion was that Evers ran afoul of Wisconsin law by declaring successive states of emergency and relying on those unlawful declarations to put the mask mandate in place, among other restrictions:

Read according to its plain language, in context, along with surrounding statutes, and consistent with its purpose, the best reading of Wis. Stat. § 323.10 is that it provides the governor the authority to declare a state of emergency related to public health when the conditions for a public health emergency are satisfied. But when later relying on the same enabling condition, the governor is subject to the time limits explicitly prescribed by statute. Therefore, we declare that Executive Orders #82 and #90——both of which declare a public health emergency in response to COVID-19——were unlawful under Wis. Stat. § 323.10.

The dissent, noting that executive orders no. 82 and 90 “set the stage for additional emergency measures necessitated by the spread of COVID-19” like “mandating the wearing of masks,” said the majority’s conclusions were “erroneous” on a few levels.

“This is no run-of-the-mill case. We are in the midst of a worldwide pandemic that so far has claimed the lives of over a half million people in this country. And with the stakes so high, the majority not only arrives at erroneous conclusions, but it also obscures the consequence of its decision. Unfortunately, the ultimate consequence of the majority’s decision is that it places yet another roadblock to an effective governmental response to COVID-19, further jeopardizing the health and lives of the people of Wisconsin,” Justice Ann Walsh Bradley began. “First, the majority errs by granting taxpayer standing to [Jeré] Fabick on a conjured justification neither briefed nor argued by any party. In essence, the product of this new theory results in a standard so low that all that is needed for taxpayer standing in this court is a song and a whistle with an ability to produce a melody appealing to at least four justices.”

“Second, the majority errs by purporting to engage in a straightforward statutory analysis. Yet, it omits any analysis of an essential word in Wis. Stat. § 323.02(16) that is outcome determinative. Left unanalyzed is the statutory term ‘occurrence,’ which when included in the analysis, proves to undermine the majority’s conclusion and mandates a contrary result,” the dissent went on. “In a final flourish of judicial immodesty, the majority goes beyond the relief requested and declares Executive Order #105 unlawful with scant analysis and without candid justification. Obscuring the fact that Fabick did not move for the relief it grants, the majority reaches out and strikes down Order #105 even though that order is not properly before the court.”

Read the opinion and dissent below: