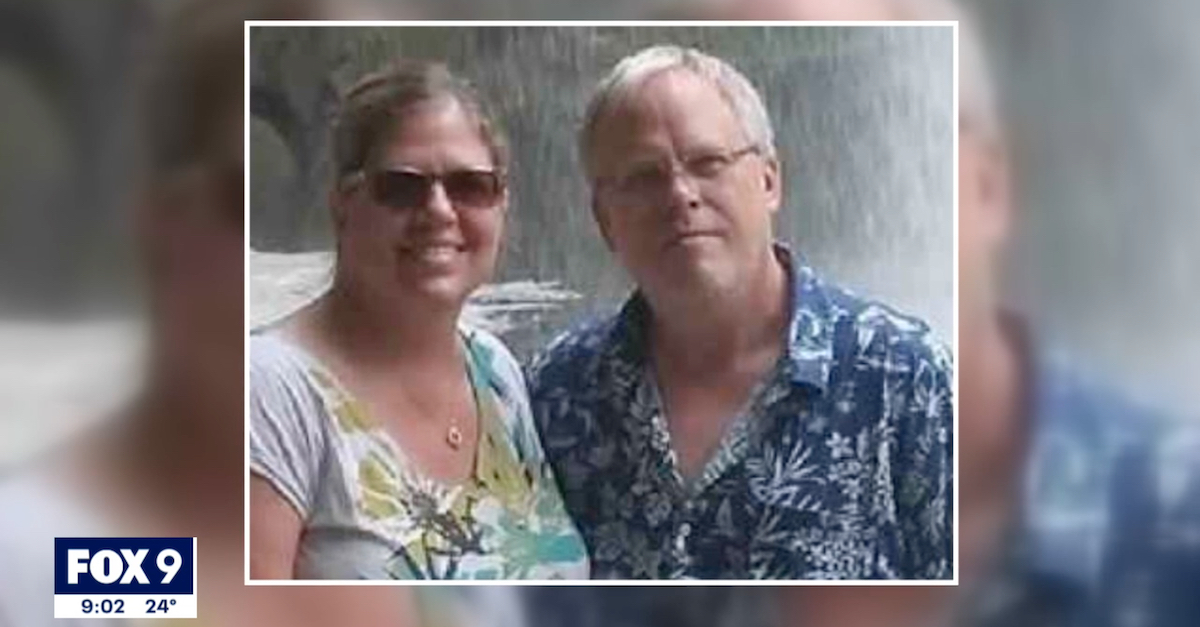 A Minnesota wife has sued a hospital for allegedly threatening to terminate life support measures that for several months had been employed on her husband. The wife said her husband had contracted COVID-19; the husband was eventually taken to Texas to receive the treatments the wife requested on his behalf.

The court papers provide a window into how the drama unfolded.

According to an affidavit filed Wed., Jan. 12, Anne Quiner’s husband Scott Quiner, 55, of Buffalo, Minn., was a patient at Mercy Hospital in Coon Rapids, Anoka County, when doctors threatened to pull the plug.

“My husband is currently on a ventilator,” Quiner told a judge via the affidavit, which was filed at 2:47 p.m. “I am in process of finding a new facility to provide medical care for my husband but need more time.”

“Doctors employed by Defendant Mercy Hospital have advised that they intend to take actions on Thursday January 13, 2022 that will end my husband’s life,” Anne Quiner also said. “These actions include turning off his ventilator. I have advised the doctors that I vehemently disagree with this action and do not want my husband’s ventilator turned off.”

Scott appointed his wife as his health care agent via legal documents executed in August 2017. The documents indicate that Anne Quiner was allowed to make virtually carte blanche decisions regarding Scott Quiner’s medical care; the papers contain only occasional insights into Scott’s own personal preferences.

“Request prayer from friends & family at bedside,” Scott wrote under a section which seeks information about “spiritual or religious beliefs and traditions.”

The document otherwise contains significant blanks as to Scott’s own wishes should he become incapacitated.

In short, he trusted his wife to make the right decisions should they become necessary.

District Court Judge Jennifer L. Stanfield signed a temporary restraining order at 10:34 a.m. on Jan. 13, but the judge was forced to pen a frantic letter at 4:32 p.m. on Jan. 12 to note that the wife’s attorney did not file all the necessary paperwork:

The request has no motion, your attorney has filed no certificate of representation, and there is no statement as to what efforts, if any, that have been made to give notice or the reasons supporting the claim that notice should not be required as are required pursuant Minn. R. Civ. P. 65.01.

You must file these documents in order for the Court to evaluate your request. Due to the time sensitivity of this issue, you should also email them to my law clerk, who has already emailed your attorney, so I can review them as soon as possible.

As noted in the court record, the harried communications between the wife’s attorney and the hospital on Jan. 12 portray an attempt to sort out the hospital’s plans and take swift legal action. A screenshot of the husband’s online medical chart — filed at 9:52 p.m. on the 12th — indicates that the hospital struggled to reach the wife and was therefore moving forward with plans for a “cessation of ventilatory support” viz. the husband at noon on Jan. 13. That plan was thwarted by the judge’s 10:34 a.m. order — which was docketed in the literal 11th hour at 11:39 a.m. on the 13th.

The judge set a briefing schedule and ordered a full hearing on a temporary injunction — the next step in restraining the hospital — on Feb. 11, 2022.

By 1:59 p.m. on the 13th, the hospital responded to that plan with a legal missive that tacitly insinuated that the wife was seeking “medically non-beneficial interventions” in an effort to save her husband’s life. Here is the context of that allegation:

Mr. Quiner’s medical care and treatment has been based on best available medical science and authority, in consultation with specialists, and in compliance with Mercy’s policies and procedures regarding medically non-beneficial interventions. Given that Ms. Quiner filed the instant action seeking injunctive relief just yesterday, discontinuation of Mr. Quiner’s ventilator has been stayed pending the Court’s ability to hear the evidence and issue a ruling at the temporary injunction stage.

The hospital suggested a more swift timetable; the court record then fell silent.

According to local news reports, Scott Quiner was transferred to an “unidentified” hospital in Texas.

“Allina Health is grateful the family was able to find a health care facility that meets their needs and we continue to wish them all the best,” the hospital said in a statement to Minneapolis/St. Paul FOX affiliate KMSP.

The wife’s attorney suggested in multiple interviews that the husband’s condition was marginally improving.

“By Sunday evening, he was already said to be improving on the ventilator while being weaned from the heavy sedatives, and provided extra nutrients,” KMSP noted. “His family claims that it appears most of his major organs are functioning well, except his lungs.”

KMSP cautioned its viewers that it did not have all of Quiner’s medical records. It noted — without elaboration as to the drugs and treatments requested — that the defendant hospital named in the emergency litigation “would not treat Scott with certain drugs, nor would they attempt other extraordinary measures that might save his life.”

Citing a conversation with the wife’s attorney, The Daily Beast reported that the husband was found to be “severely malnourished” when he arrived in Texas and was now “receiving necessary nutrition, hydration, and treatments that were requested of the Minnesota hospital and not provided.”

“We believe he has turned the corner and is taking baby steps in the right direction,” the attorney, Marjorie Holsten, reportedly said.

Holsten made similar comments to the Minneapolis Star-Tribune.

“Scott is now in a hospital in Texas getting critical care,” Holsten told the newspaper. “The doctor said Scott was the most undernourished patient he has ever seen. The last update I got was yesterday afternoon after some tests had been run; all organs are working except his lungs.”

The newspaper noted that the hospital refused to respond directly to the accusations that the husband was malnourished.

“Allina Health has great confidence in the exceptional care provided to our patients, which is administered according to evidence-based practices by our talented and compassionate medical teams,” the hospital told the Star Tribune.

Holsten told KMSP that she believed the husband would “get[] better and better” and that his case would force hospitals to recokon with “protocols” that they “have not been using.”

“I am hoping that changes are going to be made as a result of this case,” the attorney added.

The television station said the husband worked as an operations manager for a trucking and logistics firm.

A GoFundMe page for Scott Quiner has, as of the time of this writing, raised $32,301 — handily beating a $20,000 goal for the patient’s medical bills.  The page says the patient tested positive for the novel coronavirus on Tues., Oct. 30, 2021, and “was admitted to Waconia Hospital with critical[ly] low oxygen levels.”

“After requiring deep sedation his oxygen levels were not improving,” the page continues, so “Scott was then put on a ventilator.”

Waconia transferred the husband to Mercy Hospital on Nov. 6, according to the GoFundMe.