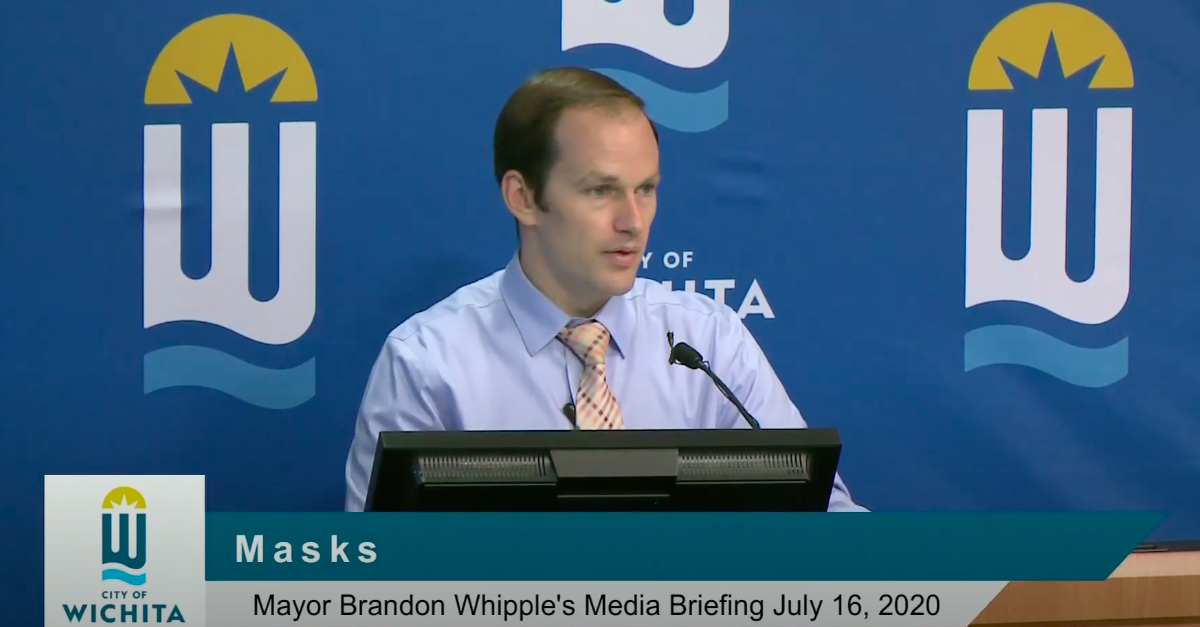 A man in Wichita, Kansas was arrested Friday for allegedly threatening to kidnap and kill the city’s Mayor because of his staunch opposition to a pandemic-related health ordinance requiring people to wear face masks in indoor public areas.

The Wichita Police Department confirmed that officers had taken 59-year-old Meredith Dowty, a retired Wichita City firefighter, into custody after being alerted to threatening statements directed at Mayor Brandon Whipple, a Democrat.

Dowty, who was allegedly motivated by his opposition to “masks and tyranny,” was booked into Sedgwick County Jail at 6:05 p.m. on Friday and is likely facing a charge of criminal threat, the Wichita Eagle reported.

According to the report, Whipple learned of the threats after being read a series of text messages that were sent to another city official inquiring about the mayor’s address and containing “a detailed threat against his life.”

“He said he was going to kidnap me and slash my throat and he needed my address because I needed to see the hangman — me and everyone who, something about tyranny,” Whipple told the Wichita Eagle. “It sounded like the person was very upset about pretty much mask mandates and he said something about not being able to see his mother because of COVID restrictions on elderly homes.”

Joe Stumpe, a musician and former journalist at the newspaper, said Dowty is actually a rather well-known musician in the city, and consistently plays guitar and harmonica at bars and nightclubs under the stage name “Cathead.”

In 2008, Dowty was honored by the Wichita City Council for saving a Wichita police officer’s life after the officer was shot in the line of duty.

Meredith Dowty aka Cathead will be performing this brisk evening starting at 8. Cathead does some originals as well as covers. Don’t be afraid to venture out tonight, just don’t be late

Posted by The Artichoke Sandwichbar on Saturday, January 13, 2018

Whipple’s July mask mandate has been the target of a small but passionate segment of Wichita’s population. Last month, 120 people took over a city council meeting, speaking for nearly seven hours in opposition to the mandate, claiming it violated their constitutional and religious beliefs.

But the mayor also said that Dowty’s threats constituted more than blowing off steam about masks.

“This wasn’t just some guy popping off on social media,” Whipple said. “He contacted someone that knows where I live that apparently he thought would give him my address.”

Dowty’s arrest comes on the heels of the FBI last week arresting several men in Michigan for allegedly plotting to kidnap the state’s Democratic Gov. Gretchen Whitmer from her vacation home before next month’s presidential election. The alleged threat entailed extensive plotting, including several surveillance trips, a plan to hinder police response by blowing up a bridge with explosive charges, and purchasing supplies—including an 800,000-volt taser. Video of their “training exercises” is now online.

On Friday, a federal judge found that there was enough evidence to support a conspiracy charge against five of the so-called “militia” members.

The FBI also said there was a potential threat as well against Virginia Gov. Ralph Northam, also a Democrat.