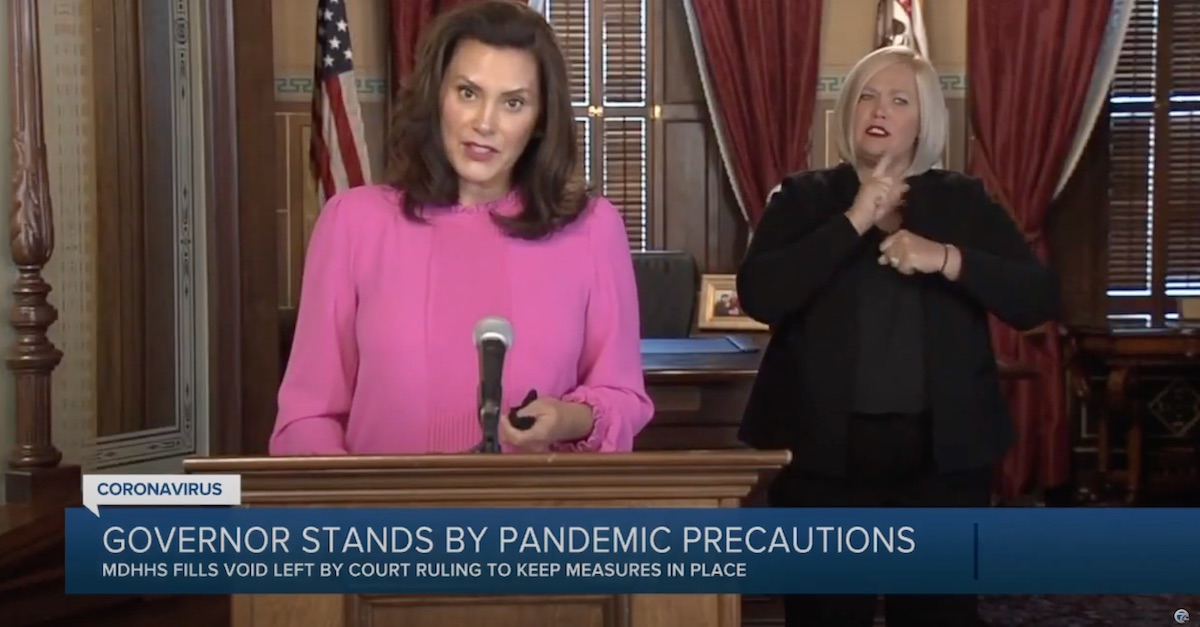 The Federal Bureau of Investigation has arrested six men for plotting to kidnap Governor Gretchen Whitmer, a Democrat, so that they could try her for “treason.”

Whitmer, whose COVID-19 shutdown of Michigan was recently found to be illegal by Michigan’s Supreme Court, was repeatedly targeted on Twitter by President Donald Trump in recent months. In April, for instance, he tweeted in all caps: “LIBERATE MICHIGAN.” In May, armed militia members showed up at the Capitol building to protest and demand “freedom” from Whitmer’s stay-at-home orders.

According to the feds, Whitmer was targeted in the real world at her vacation home by at least six men. Adam Fox, Barry Croft, Ty Garbin, Kaleb Franks, Daniel Harris, and Brandon Caserta have been charged in a conspiracy to kidnap Whitmer.

Fox 2 Detroit reported that the men are all Michigan residents, except for Croft. Croft and Fox are accused of meeting with roughly 13 others back on June 6 in Ohio to create a society dedicated to the Bill of Rights. Their interpretation of the Bill of Rights allegedly included the kidnapping of a sitting governor, as well as talk about murder.

“Several members talked about murdering ‘tyrants’ or ‘taking’ a sitting governor. The group decided they needed to increase their numbers and encouraged each other to talk to their neighbors and spread their message,” the investigating FBI agent said in an affidavit. The affidavit is a deeply disturbing and detailed account of the plot.

The feds alleged that Fox pursued a plan to form a militia to kidnap Whitmer before the 2020 Election—taking hostages at the Capitol building, if need be, in order to try Whitmer for “treason.” Seriously. Per the FBI:

Fox said he needed ‘200 men’ to storm the Capitol building in Lansing, Michigan, and take hostages, including the Governor. Fox explained they would try the Governor of Michigan for ‘treason,’ and he said they would execute the plan before the November 2020 elections.

The president often baselessly accuses his political enemies of committing treason. The FBI said Fox referred to Whitmer as a “tyrant bitch.”

The Wednesday arrests were made days after the alleged plot became more concrete. The FBI said that it had a confidential source on the inside of the group. Fox allegedly called that person on the phone as recently as Sept. 30 and “discussed purchasing a taser for use in the kidnapping operation.” By Oct. 2, Fox “confirmed he purchased an 800,000 volt taser in an encrypted chat message with [the FBI source].”

Other members of the group, presumably the co-defendants, were said to be “aware of the $4,000 cost” of the Taser.