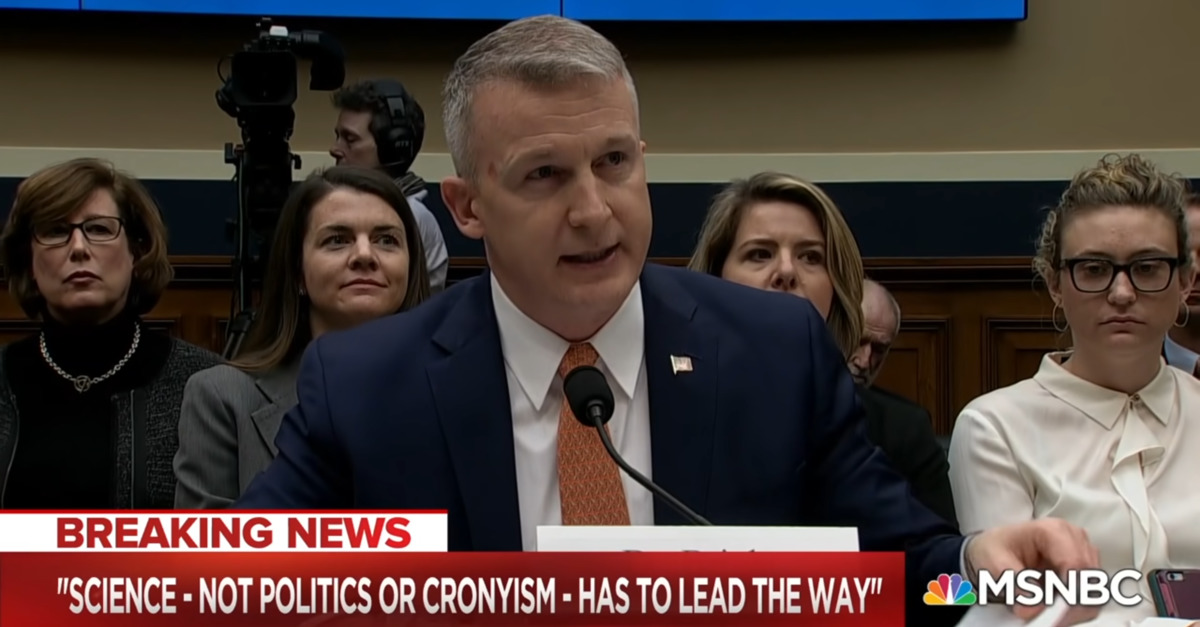 An attorney at a prominent whistleblower law firm in California believes the scandal surrounding the firing of Dr. Rick Bright could be a “replay” of the intelligence community whistleblower contretemps that led to President Donald Trump‘s impeachment in late 2019.

But other legal experts aren’t on board with that analysis.

“It’s completely appalling,” Litman, a Los Angeles Times Legal Affairs columnist, told MSNBC on Tuesday. “It’s an absolute replay of the [Michael] Atkinson complaint that led to the impeachment but as the director says now, ‘in a life and death setting.’ But as we learned then, Trump was able to brazen it out and simply dismiss Atkinson,” referring to the former intelligence community inspector general who handled the infamous Ukraine military aid cessation complaint.

“And there are some remedies here, but they’re relatively weak,” Litman continued. “All that Flynn is really–Bright, excuse me–is really asking for is to be reinstated and the law doesn’t provide much more for him. The legal process here is going to be relatively modest.”

The former U.S. Attorney then honed in on the role of Congress:

It’s the political process; the possibility of airing this in Congress. Even the possibility of some kind of ultimate congressional remedy–involving, say, funding and the power of the purse to actually respond to what is a classic instance of the corruption in Trumpland.

It’s not simply that government is wasting its time trying to chase the trails that Trump finds out by whatever method. It’s that actually, when push comes to shove, science is, as Dr. Bright says, shoved to the side in favor of cronyism in situations that really could lead to life and death outcomes.

Those Tuesday evening comments suggest something of an outsized role for Congress in the Bright personnel issue.

The former Health and Human Services (HHS) vaccine expert was demoted in mid April after–and allegedly for–complaining about the White House’s since-shuttered but truculent crusade in favor of using the unproven anti-malarial drug hydroxychloroquine as a treatment for the novel coronavirus COVID-19.

“Specifically, and contrary to misguided directives, I limited the broad use of chloroquine and hydroxychloroquine, promoted by the Administration as a panacea, but which clearly lack scientific merit,” Bright said in a statement after being dismissed from two posts.

“I believe this transfer was in response to my insistence that the government invest the billions of dollars allocated by Congress to address the Covid-19 pandemic into safe and scientifically vetted solutions, and not in drugs, vaccines and other technologies that lack scientific merit,” he added.

Bright’s full complaint was made public on Tuesday.

“Dr. Bright complaint is a replay of the Atkinson IG complaint that led to impeachment,” he tweeted, “Trump got away with brazen firing thereafter. And efforts underway to dirty Bright up. Ball in Congress’s court.”

An attorney at the law firm where Litman works cheered on his colleague’s analysis of the situation.

“Spot on,” tweeted Constantine Cannon Partner Eric R. Havian. “How many times can Trump apologists watch this movie with horror yet fail to act? Trump’s #WarOnWhistleblowers is endless and enormously damaging.”

Other legal experts weren’t so sure the Bright situation was entirely akin to the slow-motion Ukraine-cum-impeachment scandal.

“While Dr. Bright’s whistleblower complaint allegations certainly are similar to the pattern and type of behavior we saw fleshed out in excruciating detail during the impeachment saga, it is premature and potentially misleading to suggest the recourse in this instance is impeachment 2.0,” national security attorney Bradley P. Moss told Law&Crime. “Unlike with the Ukraine situation, where a clear violation of criminal law was in play, Dr. Bright’s allegations fall more likely within the realm of non-criminal abuse of power and corruption that absolutely warrants invasive congressional oversight but not something as extraordinary as impeachment.”

“This whistleblower complaint cries out for Congressional oversight,” he told Law&Crime. “But Congress has effectively neutered itself. Oversight during the Trump administration has been politicized, weak, and ineffectual. I don’t expect that to change, certainly not between now and Election Day.”

The ball certainly is in Congress’s court. But they don’t seem interested in playing. In fact, they’re not really interested in even working at the moment.