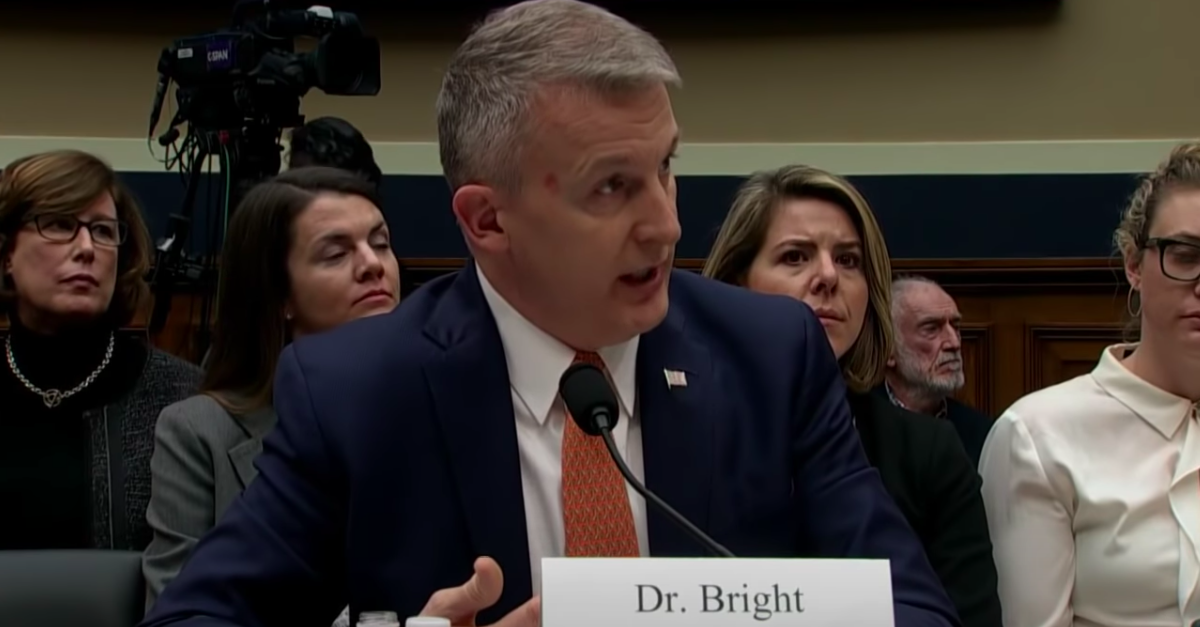 Dr. Rick Bright, the Department of Health and Human Services (HHS) whistleblower, amended his complaint to allege additional retaliation taken against him over his criticism of President Donald Trump‘s response to the novel coronavirus (COVID-19) pandemic.

“To the great detriment of the country’s public health and safety, Secretary Azar and his team have sidelined, disparaged and attempted to thwart the efforts of Dr. Bright, one of the nation’s leading pandemic and vaccine experts, to punish him for speaking out about HHS’s irresponsible and chaotic response to the COVID-19 pandemic,” Bright’s attorneys Debra Katz and Lisa Banks said in a statement provided to Law&Crime. “Dr. Bright was correct about the many issues he raised months ago – from his warnings about the scarcity of masks and PPE, to the Administration’s failure to develop diagnostics and stockpile therapeutics – and the failure of the administration to heed those warnings has had a catastrophic effect on this country.”

According to the updated filing, HHS Secretary Alex Azar told subordinates to sabotage Bright in his new role with the National Institutes of Health (NIH). Additionally, HHS employees were allegedly warned that Azar was “on the warpath” in response to Bright’s continued public criticism of the Trump administration.

Bright claims he was reassigned into his current NIH position after internally pushing back against White House claims that anti-malarial drug hydroxychloroquine was a viable and promising treatment option for COVID-19 patients. Those claims have since been proven false and the original authors and publisher of a study that promoted such theories long ago rescinded their support for the drug.

The new complaint details what Bright’s attorneys call a “retaliatory media campaign” waged by the highest levels of government.

“President Donald Trump, Secretary Alex Azar, White House Senior Trade Advisor Peter Navarro, Congressman Markwayne Mullin, and an HHS spokesperson publicly disparaged Dr. Bright, including in media publications and on national television, for taking sick leave and branded him a disgruntled worker, a deserter, and unfit to work for the federal government,” according to the latest version.

One of the 45th president’s tweets is also cited.

“I don’t know the so-called Whistleblower Rick Bright, never met him or even heard of him, but to me he is a disgruntled employee, not liked or respected by people I spoke to and who, with his attitude, should no longer be working for our government!” Trump wrote on May 14 of this year.

I don’t know the so-called Whistleblower Rick Bright, never met him or even heard of him, but to me he is a disgruntled employee, not liked or respected by people I spoke to and who, with his attitude, should no longer be working for our government!

The complaint notes that Trump sent that message to his followers just before Bright was scheduled to testify before the U.S. House Committee on Energy and Commerce Subcommittee on Health.

“This message was a clear attempt by the president to unnerve and intimidate Dr. Bright 90 minutes before his congressional testimony,” the complaint continues. “That afternoon, while Dr. Bright was testifying, President Trump and Secretary Azar further disparaged Dr. Bright while speaking to press on the south lawn of the White House before boarding Marine One.”

After that media campaign and his eventual return to work following sick leave for hypertension, Bright says, he was “surprised” to learn he had been demoted even further.

“[T]he title was Senior Advisor,” the filing explains, “which was a lower level position than he had originally been told he would be given.”

And, according to the complaint, this new role was something of an insult regarding Bright’s professional qualifications and experience.

“Dr. Bright has been deliberately impeded in his effort to perform even this diminished role at NIH,” the document goes on. “He has not been provided with all the tools he needs to be successful in his new role. Nonetheless, he has been attempting to utilize the resources he has to do the best possible work for the American people. He understands that his work is important, and he is bringing all of his talents to this mission. Yet this position does not remotely utilize his expertise or experience.”

The complaint also details alleged efforts to freeze Bright out at NIH:

On June 9, Dr. Bright called Dr. Gary Disbrow, Acting Director of BARDA following Dr. Bright’s involuntary removal, to discuss how they could best coordinate their efforts. Dr. Disbrow did not respond to Dr. Bright’s call. Dr. Disbrow also did not respond to emails that Dr. Bright sent to him and the BARDA team on June 9, 10, and 11. On June 10, 2020, in another attempt to reach Dr. Disbrow, Dr. Bright called a BARDA employee to see if there was a way to reach Dr. Disbrow to discuss how their programs could work together. This employee told Dr. Bright that they had heard from Dr. Disbrow the day before regarding collaboration between BARDA and Dr. Bright in his new role. Dr. Disbrow warned this employee to be “very careful.” He explained that Secretary Azar was very angry with Dr. Bright and was “on the war path.” He explained that Secretary Azar directed HHS employees to refrain from doing anything that would help Dr. Bright be successful in his new role.

“Bright was shocked and disturbed by this news,” the complaint notes. “On one hand, it was unfathomable that the Secretary of HHS was directing employees to undermine its work on COVID-19 diagnostics in the middle of a pandemic, solely to retaliate against an employee who made protected disclosures about illegal and improper actions within HHS. On the other hand, the news was consistent with Secretary Azar’s previous public statements disparaging Dr. Bright, and also explained why Dr. Bright was being ignored by Dr. Disbrow, a colleague with whom he had a positive relationship for nearly ten years.”