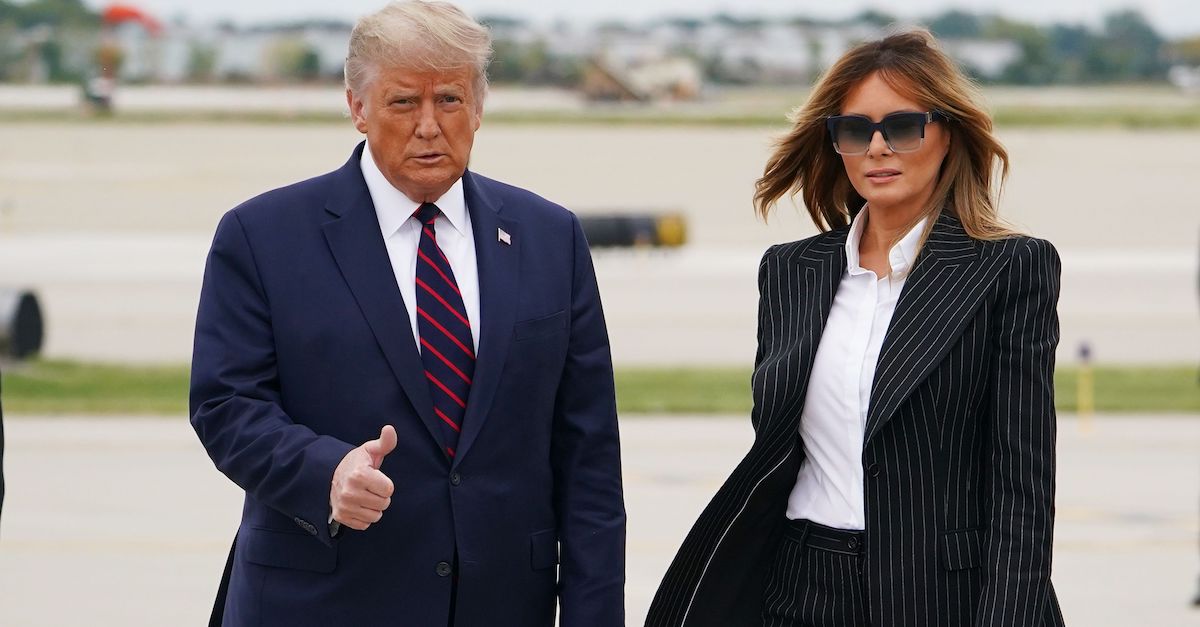 America was rocked by the news early Friday morning that President Donald Trump and First Lady Melania Trump had each tested positive for COVID-19 in the wake of top aide Hope Hicks’s diagnosis. While the White House has so far described the president’s symptoms as mild and said that he was expected the carry out his duties “without disruption” during a self-quarantine and isolation period, here’s what would happen if Trump’s condition worsens: an invocation of the 25th Amendment.

The 25th Amendment has come up before during the president’s first term, but for different reasons. Vice President Mike Pence and Second Lady Karen Pence have each tested negative for the virus, according to the White House. The Constitution says that, in the event that Trump cannot discharge his duties, the 45th president would invoke Section 3 and tell Congress in writing; then VP Pence would become acting POTUS. Pence would remain in that role until Trump writes a follow-up declaration to Congress saying he’s once again ready to carry out the duties of the presidency in full [Sections 3 and 4 of the 25th Amendment below]:

None of this is surprising or nonsensical, and we’ve seen it all before. It happened during the George W. Bush and Ronald Reagan presidencies when those presidents had to undergo procedures. Before then, the 25th Amendment was invoked in more grave circumstances—and not very long after the amendment came into existence:

Congress approved the 25th Amendment on July 6, 1965, the States completed ratification by February 10, 1967, and President Lyndon Johnson certified the amendment on February 23, 1967.

The first use of the 25th Amendment occurred in 1973 when President Richard Nixon nominated Congressman Gerald R. Ford of Michigan to fill the vacancy left by Vice President Spiro Agnew’s resignation.

In less than a year, the 25th Amendment would be used again. This time, Vice President Ford became President after Richard Nixon resigned, and he nominated Nelson Rockefeller to fill the Vice Presidential vacancy left by him.

But what would happen if the COVID-19 outbreak was more serious and widespread in the White House than currently known, rendering VP Pence unable to serve as acting POTUS? Speaker of the House Nancy Pelosi would be next in line by statute (see: 3 U.S.C. § 19 or the Presidential Succession Act of 1947).

“If, by reason of death, resignation, removal from office, inability, or failure to qualify, there is neither a President nor Vice President to discharge the powers and duties of the office of President, then the Speaker of the House of Representatives shall, upon his resignation as Speaker and as Representative in Congress, act as President,” the statute says.

After the news broke, attorney, Tulane Law professor and impeachment expert Ross Garber noted that the Presidential Succession Act means Pelosi is third in line. However, he also said “that may not be constitutional.”

The Constitution provides that if the president is incapacitated (bc he declares he is or the 25th Am process is invoked) the VP becomes acting president. If the VP is also incapacitated, a statute says next in line is the Speaker of the House, but that may not be constitutional.

Law&Crime followed up with Garber on that point.

“Article II of the Constitution provides that Congress has the power to pass a law providing for which ‘Officer’ acts as president if both the President and Vice President are disabled,” he explained. “The term ‘officer’ is used in other places in the Constitution in reference to certain high-level Executive Branch officials.”

Garber noted that the courts have “not had occasion to rule on the Act’s constitutionality,” but if there were a hypothetical successful challenge that would put Secretary of State Mike Pompeo third in line.

“Many have argued, therefore, that a member of the Legislative Branch is not an ‘officer’ and cannot be in the line of succession, which would render the provision of the Presidential Succession Act designating the Speaker of the House and the President Pro Tempore of the Senate first and second in the line of succession after the Vice President unconstitutional,” Garber said. “Under that Act, the next in line would be the Secretary of the State.”