Two Men, One of Them an Attorney, Conspired to Violate Defense Production Act: DOJ 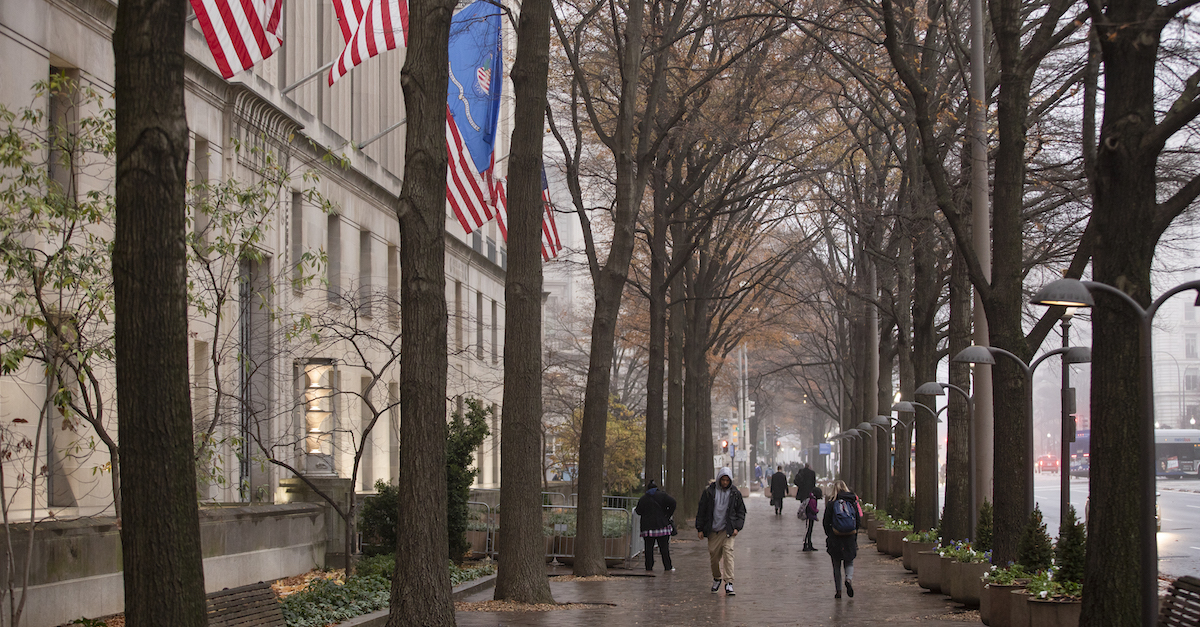 The U.S. Department of Justice building in Washington, D.C.

The Department of Justice announced charges on Tuesday against two men, one of them an attorney, for allegedly conspiring to profit off of scarce personal protective equipment (PPE) in violation of the Defense Production Act (DPA).

Kent Bulloch, identified as a 56-year-old California attorney and businessman, and 64-year-old William “Bill” Young Sr. of Phoenix, Arizona were each accused of conspiring to violate the DPA in or about and between March 2020 and April 2020.

“[T]ogether with others,” the DOJ said, Bulloch and Young “did knowingly and intentionally conspire to accumulate, for the purpose of resale at prices in excess of prevailing market prices, materials which have been designated by the President as scarce materials or materials the supply of which would be threatened by such accumulation, to wit: certain personal protective equipment (‘PPE’), including KN95 Filtering Facepiece Respirators (the ‘KN95 Masks’) and 3-Ply surgical masks (the ‘3-Ply Masks’), contrary to Title 50, United States Code, Section 4512.”

Per the DOJ press release:

Bulloch and Young sought out potential investors to sell one million KN95 respirator masks for double or triple the purchase price. To conceal their exorbitant markup on the masks, Bulloch created and signed an escrow agreement for a purported investor that falsely stated that the profits on the re-sale of the masks would not exceed 10 percent. Unbeknownst to the defendants, the purported investor was a federal law enforcement agent.

The sworn affidavit and complaint of FBI Special Agent William Bollinder, which you can read in full below, detailed a really awkward “exchange” Bulloch and Young allegedly had with an undercover FBI Special Agent. That agent was identified in the complaint as UC-2. 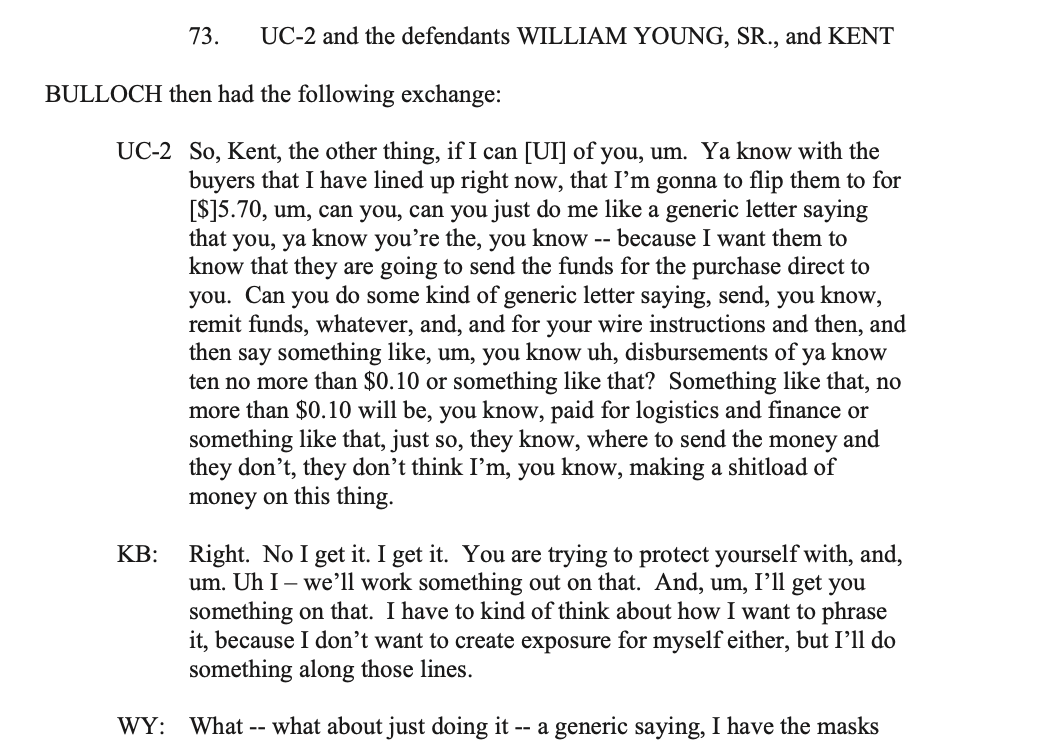 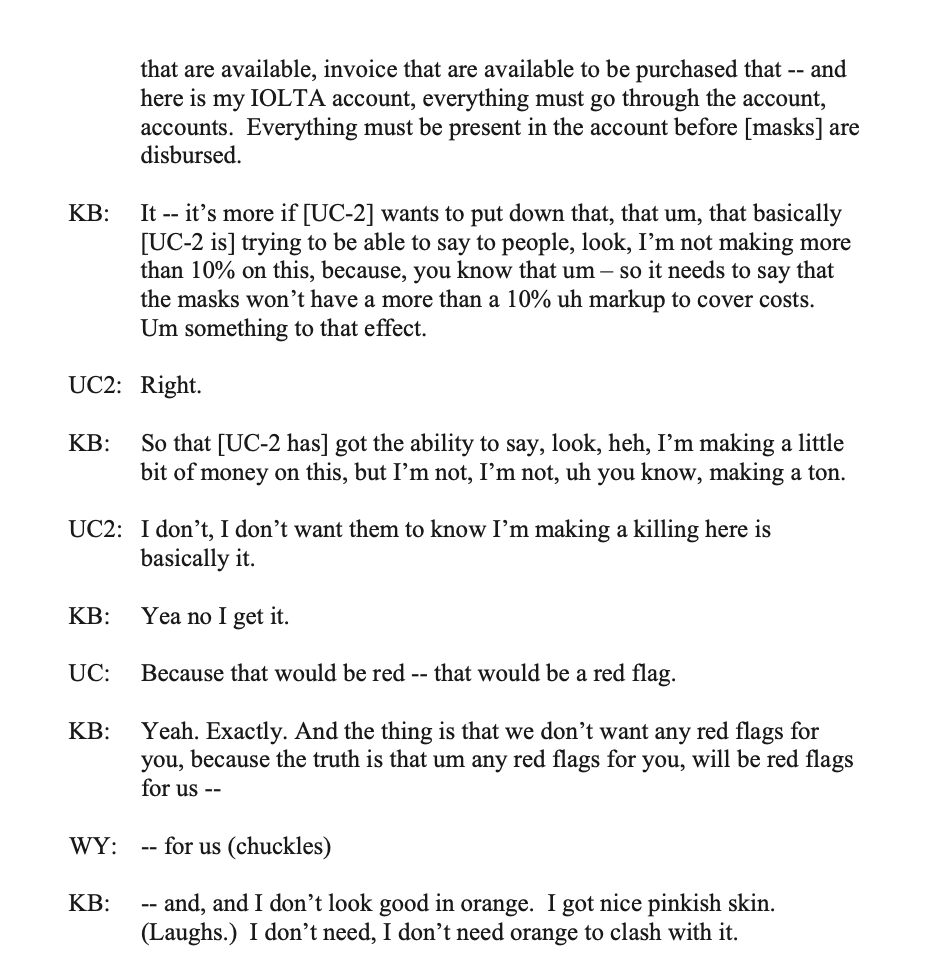 As Law&Crime has reported before, the DPA authority President Donald Trump invoked is extremely broad. The DPA, as has been discussed time and again, can compel the private sector to produce necessary materials in a time of crisis—items like ventilators, etc. But the violation of the DPA can also lead to criminal penalties against “Any person who willfully performs any act prohibited, or willfully fails to perform any act required, by the provisions of this title or any rule, regulation, or order thereunder.” (see page 5). Those people “shall, upon conviction, be fined not more than $10,000 or imprisoned for not more than one year, or both.”

The case against the defendants was brought in the U.S. District Court for the Eastern District of New York.

U.S. Attorney for the EDNY Richard Donahue said in a statement that Bulloch and Young “conspired to turn a huge profit from the urgent need for surgical masks in New York during the pandemic.

“When the Attorney General said that those engaged in price gouging should expect a knock on the door, he meant it and when we knock with one hand, we usually have a warrant in the other,” Donahue said.

A search of the California State Bar website showed that there is only one licensed attorney named Kent Bulloch in the state. Both that lawyer and the one charged by the DOJ are said to be from Santa Rosa. Law&Crime received confirmation that they are the same person.

Law&Crime attempted to reach Bulloch for comment at the email address listed on the both the State Bar website and the website for his practice. We have not yet received a response.

“Unlike other firms that quickly push a case to trial, Kent will take the time to get to know each individual and understand the concerns that plague them,” the website for his law firm says.

A search of the State Bar website also shows that an unrelated State Bar disciplinary action against Kent Bulloch  commenced in May 2019. The Bar says that matter is pending and that Bulloch’s law license is active.

Editor’s note: this story was updated with additional information about Bulloch after Law&Crime received confirmation of his identity.