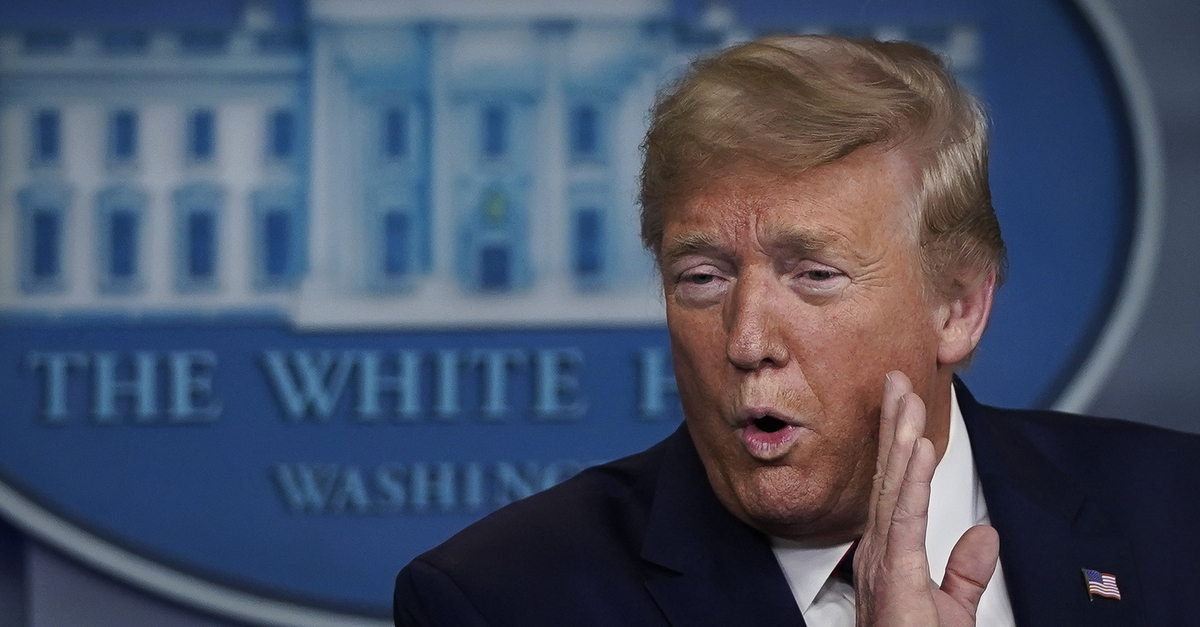 President Donald Trump signed the largest stimulus package in U.S.–or human, for that matter–history into law late Friday after the House of Representatives quickly passed the Senate’s $2.2 trillion omnibus rescue package in response to the economic shock that’s unfolded as a result of the novel Coronavirus (COVID-19) pandemic and panic.

But with the president’s signature came a quick evisceration of congressional oversight authority demanded by members of Congress concerned with hundreds of billions of dollars in bailout funds for corporations, inlcuding scandal-ridden ones like Boeing and the nation’s nearly-bankrupt commercial airlines.

Trump, by way of a signing statement, noted that his administration would quite simply override a provision in the nearly 900-page stimulus bill that would require the country’s newest inspector general–just created and tasked with overseeing the disbursement of the stimulus funds–to report to Congress any time the administration stonewalled about where or how those funds were being spent.

“Section 4108 of [the bill] establishes a new Inspector General for Pandemic Recovery (SIGPR) within the Department of the Treasury to manage audits and investigations of loans and investments made by the Secretary of the Treasury under the Act,” the signing statement explains. “Section 4018(e)(4)(B) of the Act authorizes the SIGPR to request information from other government agencies and requires the SIGPR to report to the Congress ‘without delay’ any refusal of such a request that ‘in the judgment of the Special Inspector General’ is unreasonable.”

Trump then stakes out his claim for reduced oversight:

I do not understand, and my Administration will not treat, this provision as permitting the SIGPR to issue reports to the Congress without the presidential supervision required by the Take Care Clause, Article II, section 3.

One of the more common interpretations of the Take Care Clause is simply that the president “may neither breach federal law nor order his or her subordinates to do so, for defiance cannot be considered faithful execution,” according to University of North Carolina Law Professor William P. Marshall and University of Virginia School of Law Professor Saikrishna B. Prakash.

“The Take Care Clause is arguably a major source of presidential power because it seemingly invests the office with broad enforcement authority,” Marshall and Prakash note. “Yet, at the same time, the provision also serves as a major limitation on that power because it underscores that the executive is under a duty to faithfully execute the laws of Congress and not disregard them.”

In the Trump White House, however, the clause is being invoked for a different proposition: the president doesn’t believe this law is constitutional, so he’s just not going to allow his administration to be hamstrung by its attempted constraints.

Is this legal and constitutional? It’s long been a subject of debate.

Since at least the Reagan era, scholars, jurists, and others have debated whether presidential signing statements should be considered as legislative history for purposes of interpreting federal statutes.

The question then becomes two-fold: who is actually going to do anything about Trump’s flouting of congressional authority and oversight, and where would they have any legal recourse? Judging by the actions of 45th president and his opposition the past three years, the question all-but answers itself.

In short: it looks like Democrats got rolled again.