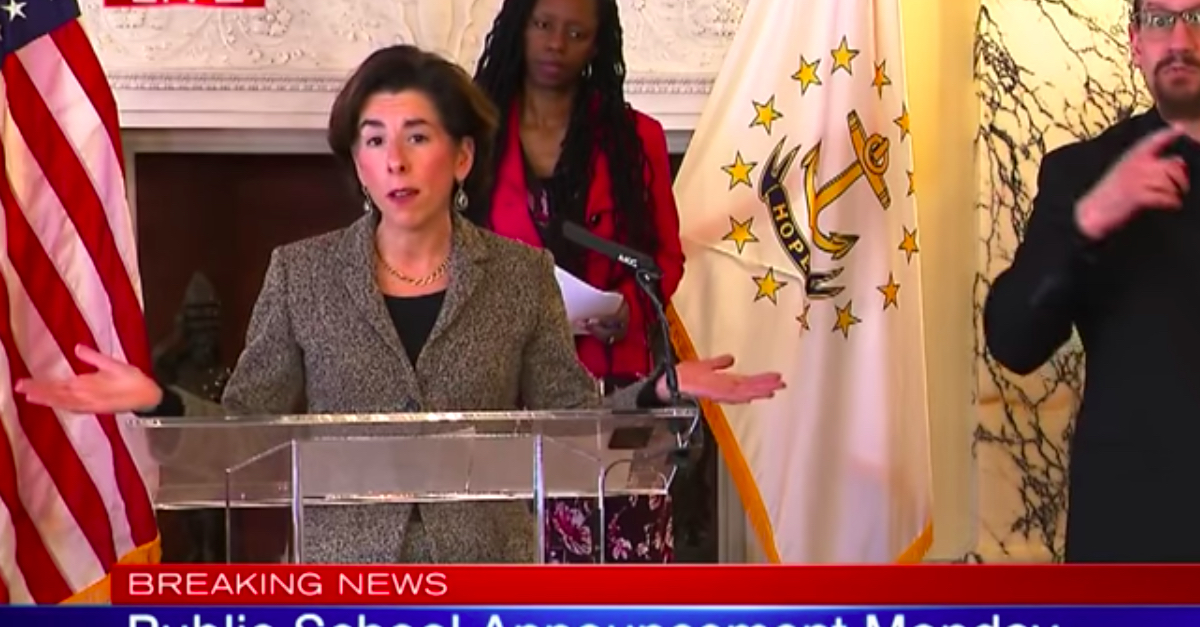 With New York City emerging as the epicenter of infection in the nation’s battle to contain the novel COVID-19 coronavirus, residents hoping to avoid the contagion have fled Manhattan in droves searching for sanctuary and, perhaps, available hospital beds. Some states are taking increasingly drastic measures to ensure that absconding New Yorkers don’t bring the virus with them to their home-away-from-home refuge.

Gov. Gina Raimondo (D-R.I.) on Friday announced she would be deploying the national guard to work alongside local law enforcement agencies in performing door-to-door searches for New Yorkers in shore communities to ensure that such persons are remaining quarantined for a minimum of 14 days, the Providence Journal reported Friday. Rhode Island had already instituted a policy of stopping non-commercial New York vehicles entering the state. (Read the governor’s executive order here.)

Authorities have been authorized to issue fines to any first-time offender violating quarantine orders and to arrest and imprison any repeat offenders.

“This is an emergency,” Raimondo said when asked about the constitutionality of targeting New Yorkers during Friday’s press briefing.

“What is constitutional in one scenario is different than in another. This is pinpointed, this is targeted, this is a state of emergency, this is limited in time, and it’s going to be enforced in a respectful way. And it’s a public health necessity.”

Raimondo said the extraordinary steps were not punitive. New York has been ravaged by the virus, pushing hospitals and emergency medical workers well beyond intended limits with 6,000 hospitalized and 1,500 flooding intensive care units. The death toll from the virus reached 519 Friday, up from Thursday’s 385.

Rhode Island had suffered only 28 hospitalizations as of Friday.

Under Rhode Island quarantine laws, anyone who violates a quarantine order can be jailed for up to 90 days and fined up to $50.  However, that penalty applies to people who violate orders of the director of the state department of public health or “his or her authorized agent.”

Similar self-quarantine requests and/or orders have been set-up in states such as Hawaii, Texas, Florida, and Connecticut against visitors from the New York City or the Tri-State New York/New Jersey/Connecticut area.

While the constitutionality of such drastic preventative measures has been questioned by organizations such as the ACLU, such emergency actions are very likely constitutional according to Georgia State law professor Anthony Michael Kreis.

“Opponents of the state executive orders are unlikely to meet the high bar necessary to challenge state officials’ efforts to block new seeds of coronavirus contagion. Unlike other outbreaks, there is no clearly established standard for when individuals are infectious,” Kreis wrote in the Harvard Law Review Friday. He went on to write:

So unless or until states can rapidly test asymptomatic individuals, it is unlikely that any court would be willing to question state officials’ restrictions on intrastate travel by individuals coming from designated jurisdictions. More problematic, perhaps, might be the breadth of the jurisdictions ordered for quarantine. Even still, the likelihood of judicial intervention in the middle of a global public health crisis where there is at least a plausible rationale for the order’s geographic scope is near zero. Except for a total ban on non-residents from identified jurisdictions entering a state that grossly mistreats non-residents over residents, it is hard to fathom any muscular judicial intervention.

Other law professors have also noted the constitutionality of such measures:

"The right of the citizen to migrate from state to state [is not unlimited] … He may not, if a fugitive from justice, claim freedom to migrate unmolested, nor may he endanger others by carrying contagion about." 314 U.S. 160, 184 (1941) (Jackson, J., concurring).