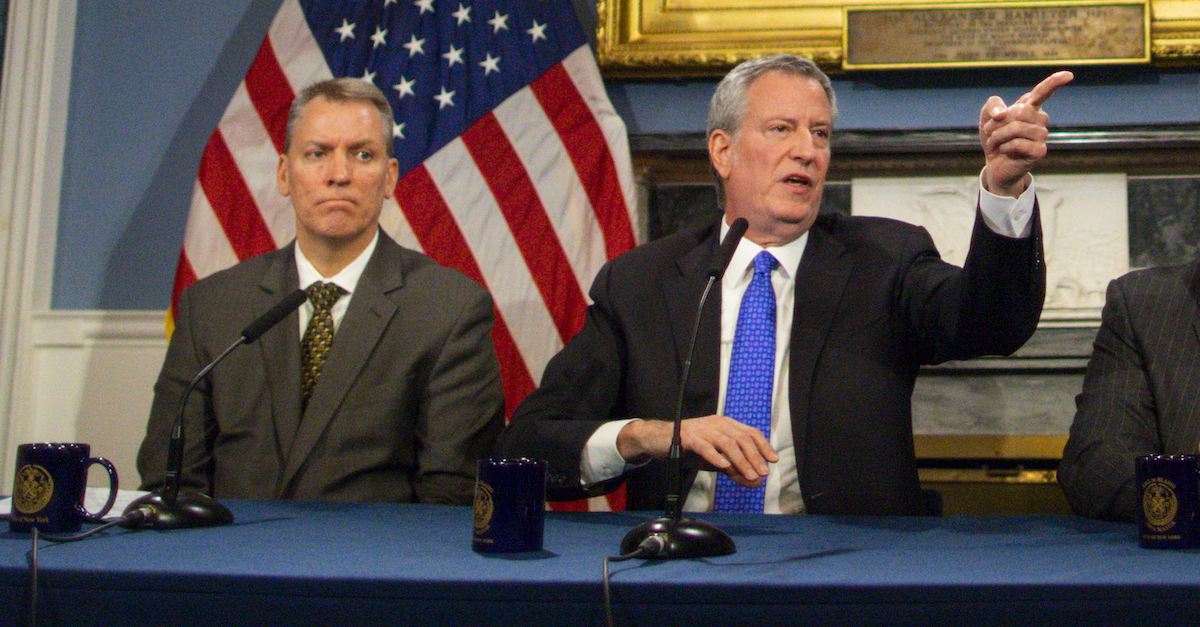 New York Mayor Bill de Blasio (R) speaks to the media next to NYPD Police Commissioner Dermot Shea (L). The two have criticized the court system’s actions in the midst of the COVID-19 pandemic.

“I will say this again and again and again. We are absolutely committed to restoring in-person operations across our court system,” DiFiore wrote in a message dated Aug. 3. “And we will continue to do so in a careful and deliberate manner and at a safe and appropriate pace, dictated by all of the internal considerations and other factors that inform our operational decisions. We will not be swayed by the different interests that are seeking to either rush, or delay, our return to in-person operations.”

She then went further by reminding people that the state’s court system “never stopped functioning”:

And one more thing I’d like to make crystal clear. The New York State Unified Court System has never stopped functioning. Not for a day, not for an hour, not for a minute. Since the beginning of this pandemic, notwithstanding the chaos, the stress, the anxiety and the tragedy, our judges and staff have heard over 160,000 essential and emergency matters without interruption, including tens of thousands of criminal arraignments and urgent, time-sensitive family court matters, the vast majority of which were heard in our virtual courts which started up in late March.

Shea similarly said that while gun arrests were occurring, the courts were not swiftly taking alleged violators “off the street.”

The New York State Office of Court Administration said the only thing “not functioning is the mayor’s cognition,” the Daily News reported.  “New York State Courts have never closed . . . To continue to blame the court system is factually incorrect and clearly meant to purposefully mislead New Yorkers as to who is responsible.”

Those comments almost perfectly align with Judge DiFiore’s remarks, which explained through six pages of detail exactly what the court system has been doing, when it has been doing it, and where the system sits with its plans to safely reopen full-scale despite the pandemic:

Our number one priority will always be the health and safety of our court family and of the lawyers, the litigants, our agency partners, and the countless members of the public who file into our courthouses on a daily basis. And our careful weighing and balancing of all of the many factors and public health concerns that guide us to smart, responsible decisions are informed always by the science, by the data and by the best available public health guidance, including that of our own epidemiologist.

While our Judges and professional staff don’t need a “thank you” for doing their jobs, they do deserve recognition for their productivity, their professionalism and their steadfast commitment to serving the public during these very challenging months. And I want to thank those of our stakeholders and our justice partners who’ve stood with us and have supported our efforts. They, too, deserve our recognition. And we will continue to work together in pursuit of the common goal of meeting the justice needs of the public we serve, while always remaining mindful of, and acting to safeguard, the health and safety of everyone who works in and uses our courts.

The specifics as to the numbers and types of cases the court system has handled since the pandemic struck may be found in the judge’s message here.