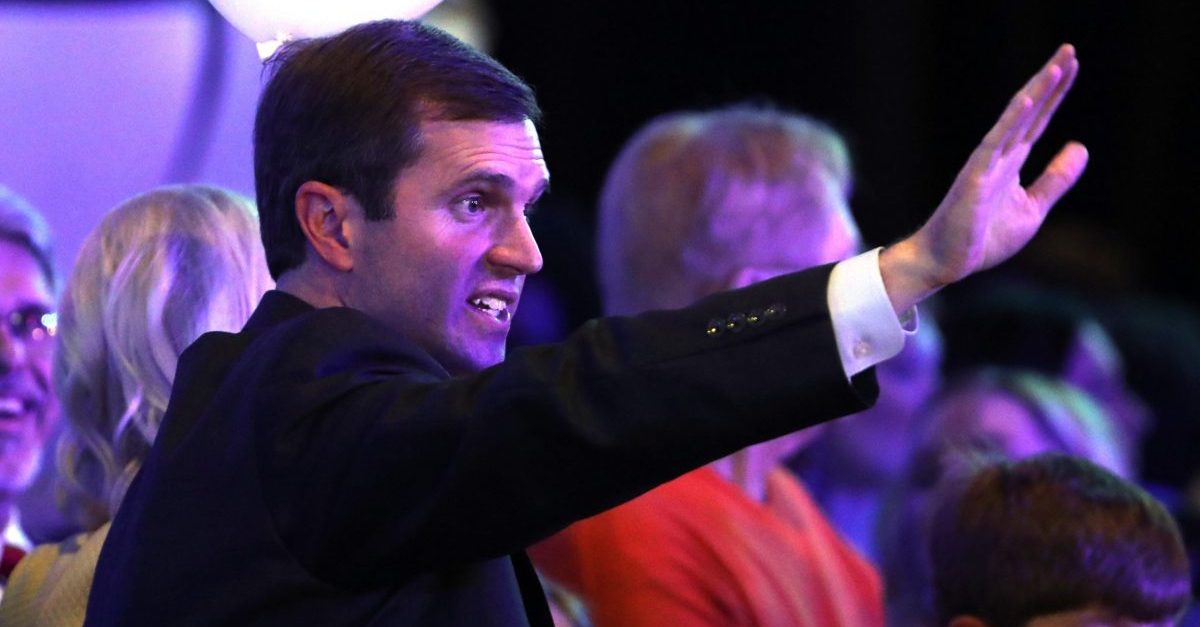 An opinion released Monday by the Sixth Circuit Court of Appeals, which sits in Cincinnati, gave a partial but clear win to a church which sued Kentucky Gov. Andy Beshear, a Democrat, over stay-at-home orders that the church successfully argued infringed on its ability to practice religion.

The per curiam opinion, loaded with court-fashioned words like “soul-sustaining” and several Biblical allegories (“it’s not always easy to decide what is Caesar’s and what is God’s”), was issued by judges Jeffrey Sutton, David McKeague, and John B. Nalbandian. Sutton and McKeague were appointed by George W. Bush; Nalbandian was appointed by Donald Trump. As to the law, the judges ruled unanimously that Beshear’s orders were not “narrowly tailored” to the government’s compelling interest in preventing the spread of the novel coronavirus.

“Congregants parked their cars in the church’s parking lot and listened to a sermon over a loudspeaker,” the opinion says. “Kentucky State Police arrived in the parking lot and issued notices to the congregants that their attendance at the drive-in service amounted to a criminal act. The officers recorded congregants’ license plate numbers and sent letters to vehicle owners requiring them to self-quarantine for 14 days or be subject to further sanction.”

That, the court unanimously held, was “a significant burden on worship gatherings.” However, the court held that “[a]t the same time, the Governor has a compelling interest in preventing the spread of a novel, highly contagious, sometimes fatal virus.”

The church won its case by agreeing from the outset to a number of concessions and limitations, which no doubt helped the judges find in the congregation’s favor:

Keep in mind that the Church and Dr. Roberts [its pastor] do not seek to insulate themselves from the Commonwealth’s general public health guidelines. They simply wish to incorporate them into their worship services. They are willing to practice social distancing. They are willing to follow any hygiene requirements. They are not asking to share a chalice. The Governor has offered no good reason so far for refusing to trust the congregants who promise to use care in worship in just the same way it trusts accountants, lawyers, and laundromat workers to do the same. Are they not often the same people, going to work on one day and attending worship on another? If any group fails, as assuredly some groups have failed in the past, the Governor is free to enforce the social-distancing rules against them for that reason.

The issue, legally, was that the governor’s executive orders did not carve out an exception for “soul-sustaining” endeavors while instead allowing clear exceptions for some economic activities to continue. The court’s language, which chided the governor, here is best left to stand on its own (internal citations omitted):

The Governor insists at the outset that there are “no exceptions at all.” But that is word play. The orders allow “life-sustaining” operations and don’t include worship services in that definition. And many of the serial exemptions for secular activities pose comparable public health risks to worship services. For example: The exception for “life-sustaining” businesses allows law firms, laundromats, liquor stores, and gun shops to continue to operate so long as they follow social-distancing and other health-related precautions. But the orders do not permit soul-sustaining group services of faith organizations, even if the groups adhere to all the public health guidelines required of essential services and even when they meet outdoors.

The judges did note that the “fast-moving pace” of the litigation made “fact-finding” — the traditional role of lower court proceedings — difficult.  Therefore, the circuit court would not grant the church a further win beyond drive-in services. “We realize that this falls short of everything the Church has asked for and much of what it wants,” the judges said. “But that is all we are comfortable doing after the 24 hours the plaintiffs have given us with this case.”

The judges pushed for some degree of reconciliation.  “In the near term, we urge the district court to prioritize resolution of the claims in view of the looming May 20 date and for the Governor and plaintiffs to consider acceptable alternatives,” they said. “The breadth of the ban on religious services, together with a haven for numerous secular exceptions, should give pause to anyone who prizes religious freedom. But it’s not always easy to decide what is Caesar’s and what is God’s — and that’s assuredly true in the context of a pandemic.”

The judges said they “don’t doubt the Governor’s sincerity in trying to do his level best to lessen the spread of the virus or his authority to protect the Commonwealth’s citizens,” but said it was not the job of federal courts to judge “how individuals comply with their own faith as they see it.”

This argument by the judges highlights why the state’s position needed to budge, at least a little:

Why can someone safely walk down a grocery store aisle but not a pew? And why can someone safely interact with a brave deliverywoman but not with a stoic minister? The Commonwealth has no good answers. While the law may take periodic naps during a pandemic, we will not let it sleep through one.