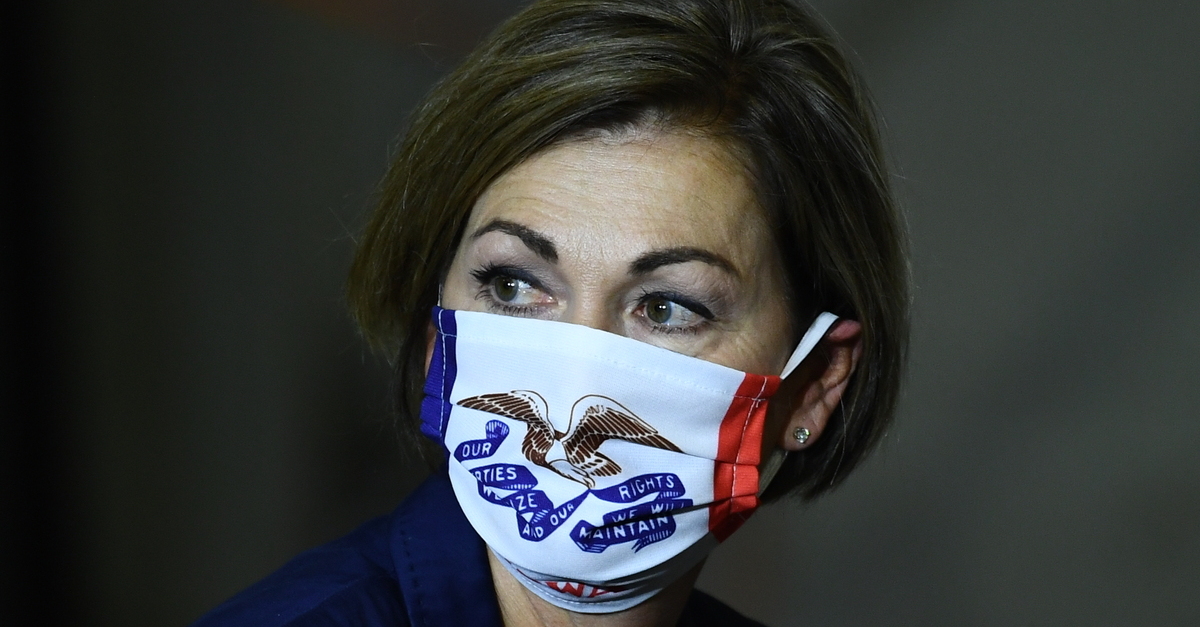 A federal judge on Monday blocked state officials in Iowa from enforcing a ban on mask mandates for public schools.

The law, House File 847, was signed by Gov. Kim Reynolds (R) in May of this year and prohibits local school boards and superintendents from issuing mask mandates “unless the facial covering is necessary for a specific extracurricular or instructional purpose.”

Senior District Judge Robert Pratt, a Bill Clinton appointee, issued a temporary restraining order which immediately halts enforcement of the controversial culture war law that has drawn intense scrutiny in recent weeks as children in the Hawkeye State return to in-person classrooms amidst a massive surge in COVID-19 cases, hospitalizations and fatalities.

The court agreed with experts cited by the plaintiffs–as well as the Centers for Disease Control and Prevention–that mask-wearing in schools effectively reduces the spread of the virus and will reap substantial safety dividends for disabled children and other children with preexisting conditions that make them susceptible to COVID-19.

In the 29-page ruling, Pratt cast his decision as necessary and logical to vindicate the constitutional right to an education:

It has been almost forty years since the U.S. Supreme Court recognized that, regardless of citizenship status, denying school-aged children a free public education violates the U.S. Constitution. In [one landmark case], Justice [William] Brennan described the importance of protecting the most vulnerable class of society—innocent children—who “can affect neither their parents’ conduct nor their own status.” Forcing children to bear the brunt of societal discord “is illogical and unjust.”

Citing Brown v. Board of Education, the judge went on to opine that “education is perhaps the most important function of state and local governments” implicitly upbraiding state officials for a law that encroaches on local decision-making over such matters.

“The Court agrees with Plaintiffs that Iowa Code section 280.31 substantially increases Plaintiffs’ children’s risk of contracting SARS-CoV-2 by prohibiting school districts from instituting mask mandates for students, staff, teachers, and visitors, which in turn substantially increases Plaintiffs’ children’s risk of severe illness or death,” Pratt wrote. “Because Plaintiffs have shown that Iowa Code section 280.31’s ban on mask mandates in schools substantially increases their risk of contracting the virus that causes Covid-19 and that due to their various medical conditions they are at an increased risk of severe illness or death, Plaintiffs have demonstrated that an irreparable harm exists.”

The judge’s order casts his decision as an “extreme remedy” which is nevertheless necessary and legally valid due to the current data on COVID-19 and the constitutional right of children to be safe in school.

“[I]f the drastic increase in the number of pediatric COVID-19 cases since the start of the school year in Iowa is any indication of what is to come, such an extreme remedy is necessary to ensure that the children involved in this case are not irreparably harmed,” the order from the senior judge of the U.S. District Court for the Southern District of Iowa concludes.

The decision was met with scorn by the law’s proponents.

“Today, a federal judge unilaterally overturned a state law, ignored the decision by our elected legislature and took away parents’ ability to decide what’s best for their child,” Reynolds said via Twitter. “We will appeal and exercise every legal option we have to uphold state law and defend the rights and liberties afforded to any American citizen protected by our constitution.”

In turn, the American Civil Liberties Union, which represents the plaintiffs in the ongoing lawsuit, praised the decision.

“This is a huge victory for parents of children with disabilities who have faced the agonizing choice of protecting their children’s health, or risking it to ensure they receive an equal education,” the group tweeted. “This decision will ensure Iowa schools can take basic public health measures to protect their students. It also sends a message to states across the country that they cannot put politics over the rights and safety of students with disabilities.”

The judge’s order quickly had a real-world effect.

On Monday evening, hours after the ruling was published, Des Moines Public Schools announced that all students, staff and visitors must wear masks beginning on Wednesday, Sept. 15.

“The court’s decision to set aside Iowa’s ban on school districts being able to protect children in our care is welcome news,” Dr. Thomas Ahart, superintendent of Des Moines Public Schools, the largest school district in the state, said in a statement. “As the COVID-19 pandemic continues to surge in Iowa, our families and staff have expressed their concerns about schools not being able to require minimal, effective mitigation steps, such as wearing a mask, in order to keep people healthy and safe. With today’s ruling, as Superintendent I will reinstate a mask mandate – as we had in place for most of last school year – for all students, staff and visitors to Des Moines Public Schools.”

Read the court’s full opinion and order below: