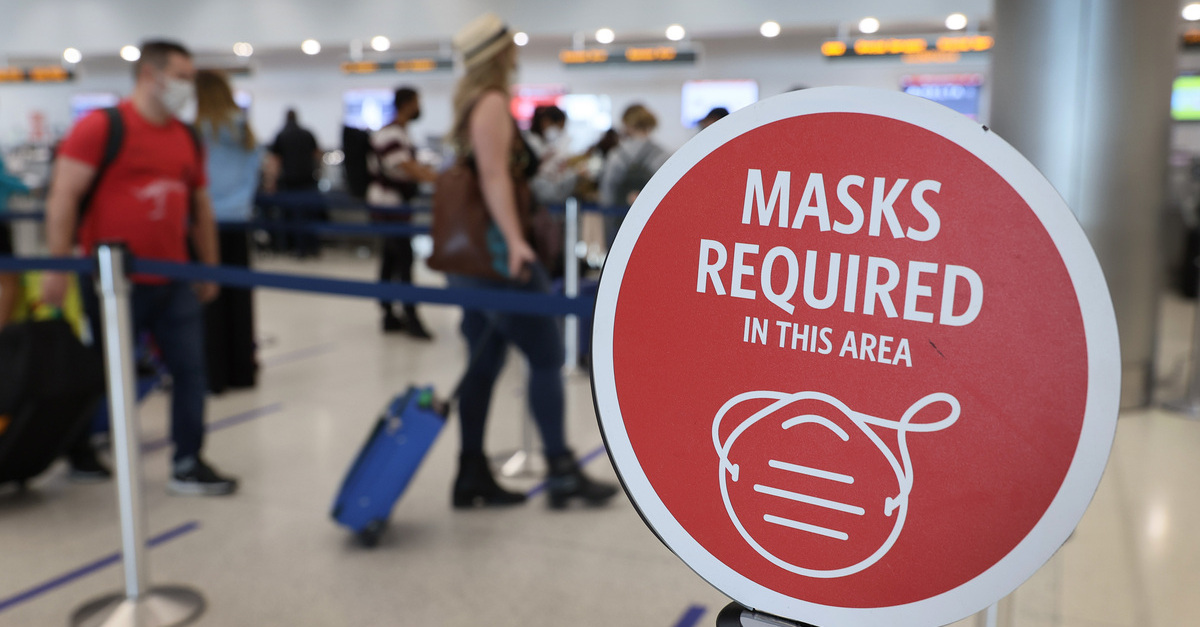 A sign reading, ‘masks required in this area,’ is seen as travelers prepare to check-in for their Delta Airlines flight at the Miami International Airport.

A group of 13 plaintiffs sued seven major airlines Monday, asking a federal court to award them close to $1 million in damages for a “conspiracy to interfere with civil rights” by requiring masks aboard flights.

The lawsuit was first filed in June in United States District Court for the Middle District of Florida by 44-year-old Lucas Wall of Washington, D.C. According to a press release obtained by Law&Crime, Southwest Airlines refused to grant Wall a medical mask exemption for a flight from Orlando to Fort Lauderdale; he also had travel plans on other airlines throughout the summer, but those airlines similarly refused to absolve him of the requirement to wear a face mask. Wall says he is unable to wear a mask because he suffers panic attacks and hyperventilation if his sources of oxygen are obstructed.

Now Wall has amended his 242-page complaint to include claims from a dozen other individuals along with 525 exhibits. All but one of the plaintiffs claim that they are disabled and that the airlines’ mask requirement violates their rights under federal law. Wall and the other plaintiffs allege that the airlines have “conspired” to ban millions of disabled Americans from using air travel.

In particular, Wall alleges that Delta CEO Ed Bastian “targeted” disabled passengers, “relegating them to second-class citizenship by telling them they can’t travel.”

In Wall’s emailed statement, he explained that after he filed his individual lawsuit, he heard from “hundreds of other Americans who have been banned from flying because of their medical conditions.” He then amended his complaint to include other plaintiffs “to represent the class of tens of millions of Americans who have been illegally forced to muzzle themselves by the defendants since May 2020.”

The sole passenger plaintiff who is not disabled claims to have been “forced” by the airlines “to wear unauthorized and/or EUA masks in violation of federal law and in breach of the defendants’ contracts of carriage.”

The plaintiffs plan to follow the process to be certified as a class-action lawsuit. If the court grants them class status, other similarly-situated plaintiffs will be permitted to join the litigation. For now, the named plaintiffs have requested both compensatory and punitive damages in the amount of $100,000 per airline and $10,000 per airline executive (the complaint names as defendants “numerous airline executives”).

Wall and his fellow plaintiffs are currently representing themselves in the lawsuit, but request that the court award them attorneys fees should they seek legal counsel later.

Before the case was a class action, Wall attempted to have the magistrate disqualified after that magistrate issued an adverse ruling, arguing that the magistrate made the ruling too quickly and could not possibly have adequately considered his side.

Lucas Wall has already sued President Joe Biden, the Centers for Disease Control and Prevention, the Transportation Security Administration, the Department of Homeland Security over mask mandates. The federal government has moved to dismiss Wall’s claims, arguing that mask mandates are perfectly legal under federal law.

Wall also filed an emergency petition before the Supreme Court asking that the federal mask mandate be lifted.

District of Columbia resident & generalized anxiety disorder sufferer Lucas Wall asks Justice Thomas to lift the federal transportation mask mandate for him so he can fly to Germany maskless to visit his brother & wife this weekend. pic.twitter.com/oPDnGpFOkB

So far, Wall has been unsuccessful in his attempts to have mask mandates declared illegal by the courts.

Counsel for the airlines did not immediately respond to requests for comment.