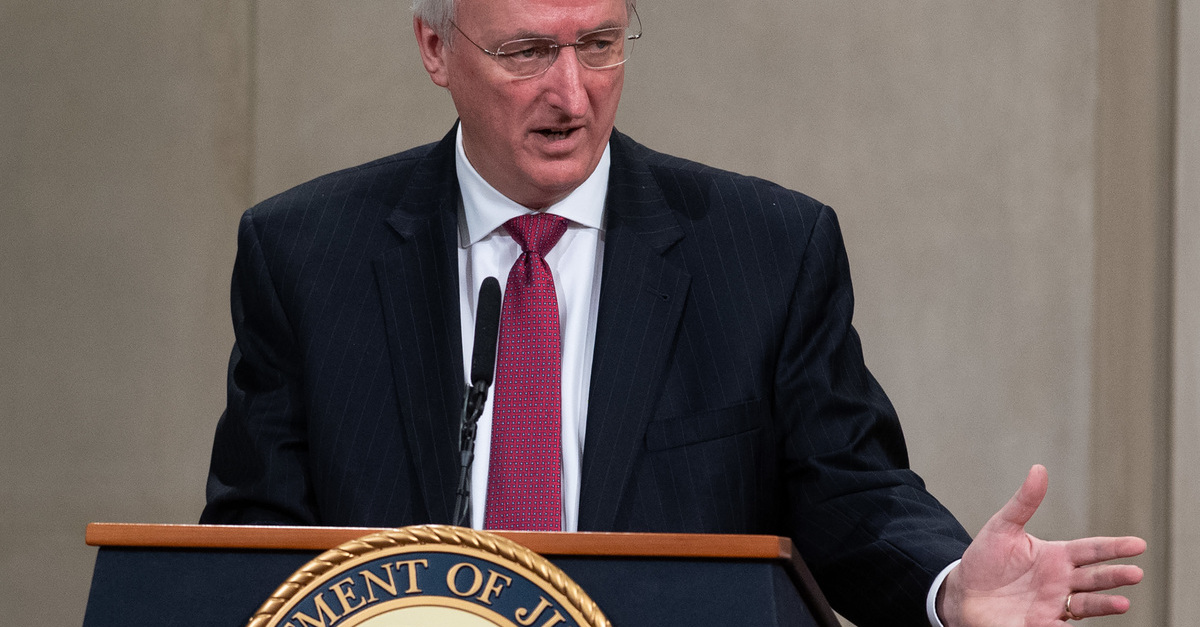 U.S. Deputy Attorney General Jeffrey Rosen sent a memo to top Justice Department officials Tuesday stating that “purposeful exposure and infection of others with COVID-19” could trigger prosecutions under federal terrorism statutes, according to the reports on the contents of the memo. “Because Coronavirus appears to meet the statutory definition of a ‘biological agent’… such acts potentially could implicate the Nation’s terrorism-related statutes,” the memo continued. “Threats or attempts to use COVID-19 as a weapon against Americans will not be tolerated.”

There are actually two separate federal statutes under which intentional spread of COVID-19 might be prosecuted. One is more general, the other specifically calls out bioterrorism.

Here’s the general one:

(A) involve acts dangerous to human life that are a violation of the criminal laws of the United States or of any State;

(B) appear to be intended—

(i) to intimidate or coerce a civilian population;

(ii) to influence the policy of a government by intimidation or coercion; or

(iii) to affect the conduct of a government by mass destruction, assassination, or kidnapping; and

(C) occur primarily within the territorial jurisdiction of the United States.

Many states already have laws prohibiting the known transfer of a virus, or the intentional violation of quarantine orders. Read together with the general terrorism statute, such acts could then constitute not only a state offense, but also an act of domestic terrorism.

More pointedly, however, there is a statute that specifically contemplates the intentional spread of a virus. Federal law defines a “biological agent” as, among other things:

“any naturally occurring or bioengineered component of any such microorganism, virus, infectious substance, or biological product’’

Under the law, anyone who “knowingly develops, produces, stockpiles, transfers, acquires, retains, or possesses any biological agent, toxin, or delivery system for use as a weapon, or knowingly assists a foreign state or any organization to do so, or attempts, threatens, or conspires to do the same, shall be fined under this title or imprisoned for life or any term of years, or both.”

That’s a lot of words – and most of them were written for the purpose of criminalizing purposeful attacks on the U.S. However, let’s look closely at what’s nestled in there. “Anyone who knowingly… transfers… any biological agent… shall be fined… or imprisoned for life or any term of years…”

The statute criminalizes only the “knowing” transfer of a virus; accidental transmissions – even really egregious ones like the Florida spring-breakers or the Staten Island newlyweds would not qualify. Members of extremist groups, however who have reportedly been encouraged to purposely spread COVID-19 to cops and Jewish people would certainly fall into this category. According to the reported FBI alert Thursday, extremist groups have instructed their followers to spread COVID-19 at places of worship, markets, and political offices.

There’s no requirement that the knowing transfer be done by a large group, either. The statute prohibits “anyone” from knowingly transferring a virus. That opens up unaffiliated individuals to criminal prosecution under the right set of facts.

But back to the statute. In addition to criminalizing knowing actual transfers, it also prohibits attempts and threats to spread a virus. This opens up criminal liability even wider. Theoretically, anyone who is aware of having contracted COVID-19 and even threatens to spread it could be guilty of terrorism and face life imprisonment. In times like these, when the world is abuzz with tension over the spread of coronavirus, it is not impossible to imagine law enforcement treating every potential threat with the utmost seriousness (see: this guy).

Without question, use of terrorism statutes in the context of a naturally-occurring novel virus would be unprecedented. But just about everything right now is unprecedented; given the seriousness of the worldwide coronavirus outbreak, it is not surprising that law enforcement would choose to take an aggressive stance on intentional wrongdoing.