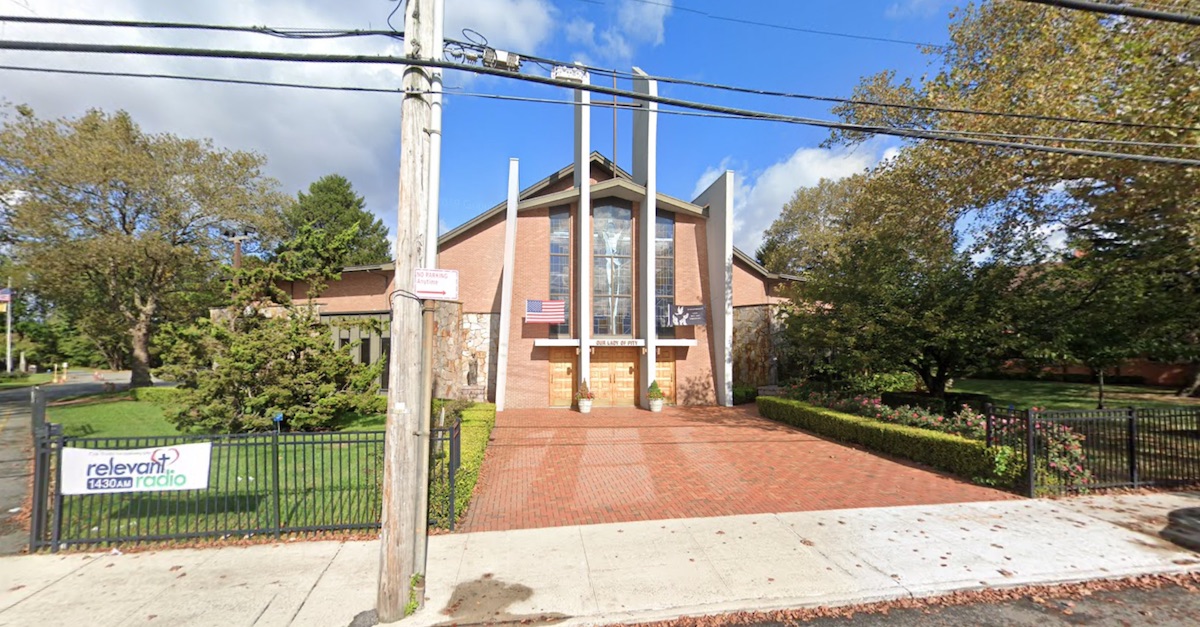 By now, you’ve probably seen the headlines about the Staten Island couple who hosted their wedding Sunday at Our Lady of Pity Church, despite their gathering’s flying in the face of every available public health guideline. Now, we can all channel our wrath directly to bride Irene Sanzone and groom John Fuchs, who are about to experience their well-deserved 15 minutes.

You’ll excuse me if quarantining is reducing my patience, but I think we’re beyond internet-shaming at this point. These people – and by “people,” I mean the happy newlyweds and the irresponsible church officials who married them – may rightly face serious legal penalties as the result of their selfish and dangerous behavior. I’m happy to wait until our courts reopen in a few months; when they do, though, I hope the happy couple has saved some of the checks from their pearlescent birdcage for attorneys fees and court costs.

One of the more amusing aspects of studying law is learning that courts and legislators have already contemplated almost every permutation of abhorrent behavior. While the Fuchs’s decision to host a wedding mid-pandemic seems novel and outrageous to casual observers, law professors have been coming up with examples like that for years.

First, let’s talk about civil liability – the kind where someone could sue and demand money.

If someone attended the wedding and contracted COVID-19 while present, that person may have a pretty solid lawsuit on their hands.

New York Governor Andrew Cuomo announced Friday that, as of 8 p.m. on Sunday, his “PAUSE” executive order would take effect. In relevant part, it mandates:

Non-essential gatherings of individuals of any size for any reason (e.g. parties, celebrations or other social events) are canceled or postponed at this time;

Sure, the Fuchs’s wedding would not have technically violated Cuomo’s executive order, given that the ceremony occurred a few hours prior to the order’s effective time; however, Cuomo’s announcement and similar CDC guidance were well in place prior to the couple’s big event. For civil purposes, it’s not necessary that there be a law in place specifically prohibiting the negligent behavior — just that it’s something a reasonable person wouldn’t have done.

There is no question that the Fuchs’s decision to convene a gathering (20-25 people were reportedly present) under these circumstances constitutes at least simple negligence – and likely gross negligence or recklessness. All people have a legal duty to act the way reasonable people would behave in similar circumstances. A reasonable person would not defy CDC guidance, nor would one specifically violate a public health directive set to go into effect a few hours hence. That goes for church officials, too. They also knew the widely publicized risks of spreading coronavirus during public gatherings, and also chose to blatantly disregard those risks. Without question, both the happy couple and the church personnel who participated in the wedding breached a legal duty to the community.

Know what else looks pretty bad? The church itself has a statement on its website admitting that it knows gatherings are dangerous. The following statement, which predated the Fuchs wedding by at least a week, proves that Our Lady of Pity was well aware of the dangers afoot. 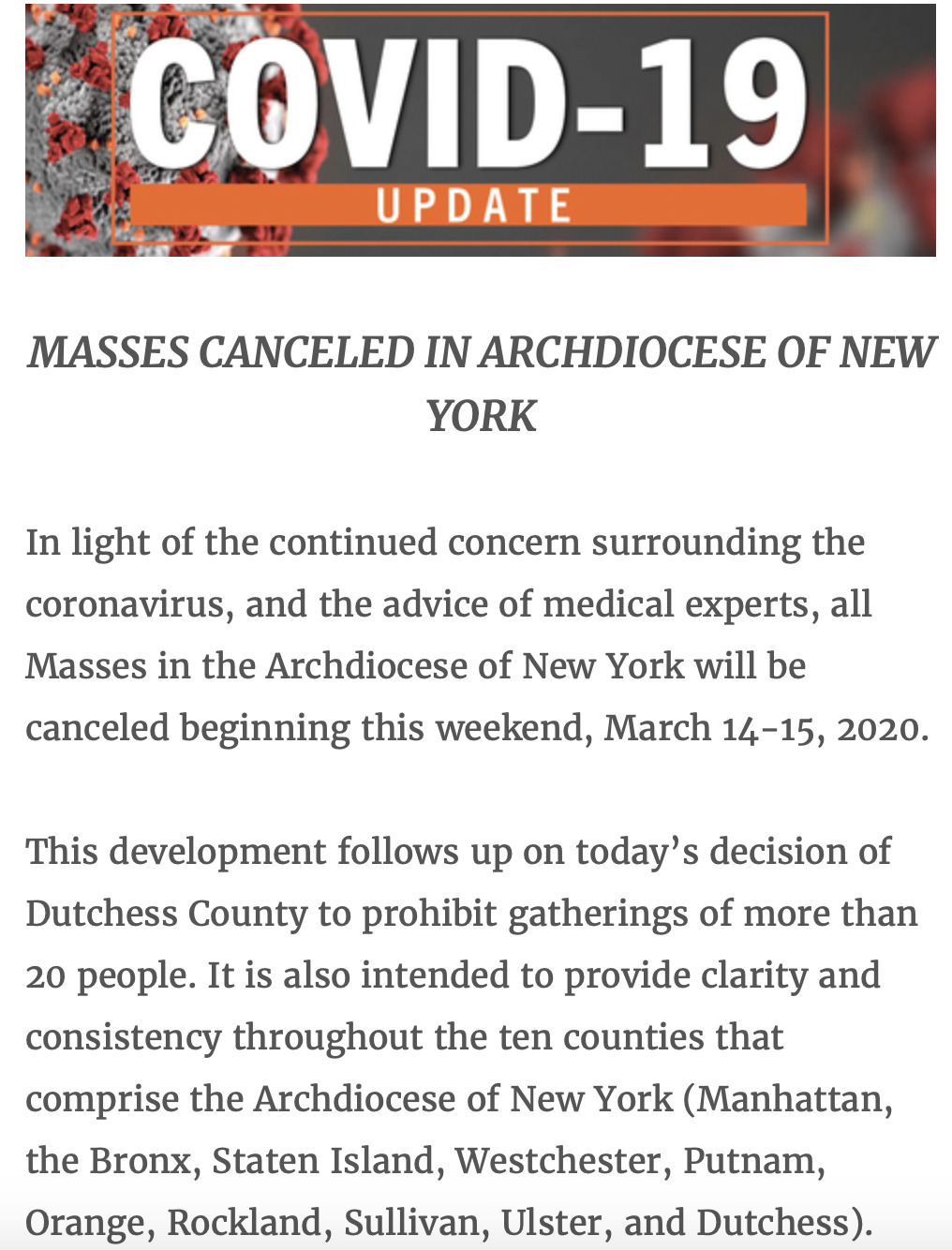 Likely fearing that it could be dragged into a lawsuit, the archdiocese wasted no time clarifying that Our Lady of Pity had gone rogue. “The wedding was not in keeping with archdiocesan guidelines and should not have been held,’’ archdiocese spokesman Joseph Zwilling told The New York Post. We at Law&Crime note that the church has enough legal problems on its hands these days.

What would be more difficult to prove in a tort lawsuit is “causation.” If a person were to contract COVID-19 as a result of being exposed at this wedding, how would they prove the precise source of their contagion? Likely that would depend on a case-by-case analysis, which would take into account a plaintiff’s other sources of exposure in the days leading up to contracting the virus.

Again, though, the law has already contemplated such difficulties. When multiple actors may be responsible for harming a victim, courts have employed all sorts of creative methods of holding a wrongdoer accountable. Given that both the church’s behavior and the couple’s behavior was so egregious when viewed in context, a court might very well be willing to employ a novel or loose take on causation. And if you don’t believe me, ask someone at Johnson & Johnson.

Some naysayer will undoubtedly point out that ceremony guests may have “assumed the risk” of becoming infected by their voluntary choice to attend. That’s potentially true. However, the validity of such defenses would be extremely fact-sensitive. And let me say this: it is a truth universally acknowledged that even a solid affirmative defense will not deter a plaintiff’s lawyer in pursuit of a contingency fee. No jury in the world is going to have sympathy for these brats or their church. Where there is egregious behavior, there are jury verdicts.

For anyone tempted to bring up that marriage has long been considered a “fundamental right,” I remind you that none of this is about getting married. All of it is about having a wedding.

Cuomo: “You can get married, it’ll just be a very small convening, which is also cost-effective.”

Of course, this simply addresses the civil side of the Fuchs’ stupidity. As fairness mandates, there is also potential criminal liability for those who fancy themselves above the standards of public safety.

The following is New York’s definition of “criminal negligence”:

“Criminal negligence.”  A person acts with criminal negligence with respect to a result or to a circumstance described by a statute defining an offense when he fails to perceive a substantial and unjustifiable risk that such result will occur or that such circumstance exists.  The risk must be of such nature and degree that the failure to perceive it constitutes a gross deviation from the standard of care that a reasonable person would observe in the situation.

And, if we’re going to get really grim, here’s the one for negligent homicide:

There’s a lot about criminal negligence statutes that lines up precisely with the decision to hold a wedding mid-pandemic. The risk of spreading coronavirus among groups of people is textbook “substantial and unjustifiable.”  Failure to act accordingly would certainly constitute a gross deviation from what a reasonably careful person would choose to do. The only question is whether holding a wedding would constitute behavior “described by a statute defining an offense.” Had the wedding been a few hours later, the governor’s EO would likely place it in just that category. Whether authorities could tie the behavior to some other statute is unclear at best.

Of course, there is again the issue of causation. If someone were to become ill as a result of the wedding’s taking place, it could be difficult to tie that result directly to the negligence at hand. Sure. Again, though, when someone dies as a result of someone’s extreme carelessness, courts and juries can sometimes be convinced to make some inferences.

This is also a good time to point out that New York, like many states, has a law prohibiting anyone who knows they have “an infectious venereal disease” from having sex with anyone else. Of course, statutes like these were adopted in response to the AIDS crisis, and are not directly applicable to COVID-19. But it’s not hard to imagine them being amended to cover the current health crisis.

Will the happy newlyweds or their officiant actually be prosecuted? Right now, probably not. Police are busy with unprecedented burdens on resources. Prosecutors are grappling with novel challenges. Courts are closed. The irony isn’t lost on any of us that the pandemonium to which these people arguably contributed is exactly what will shield them from from legal responsibility. Ah, love in the time of the coronavirus.