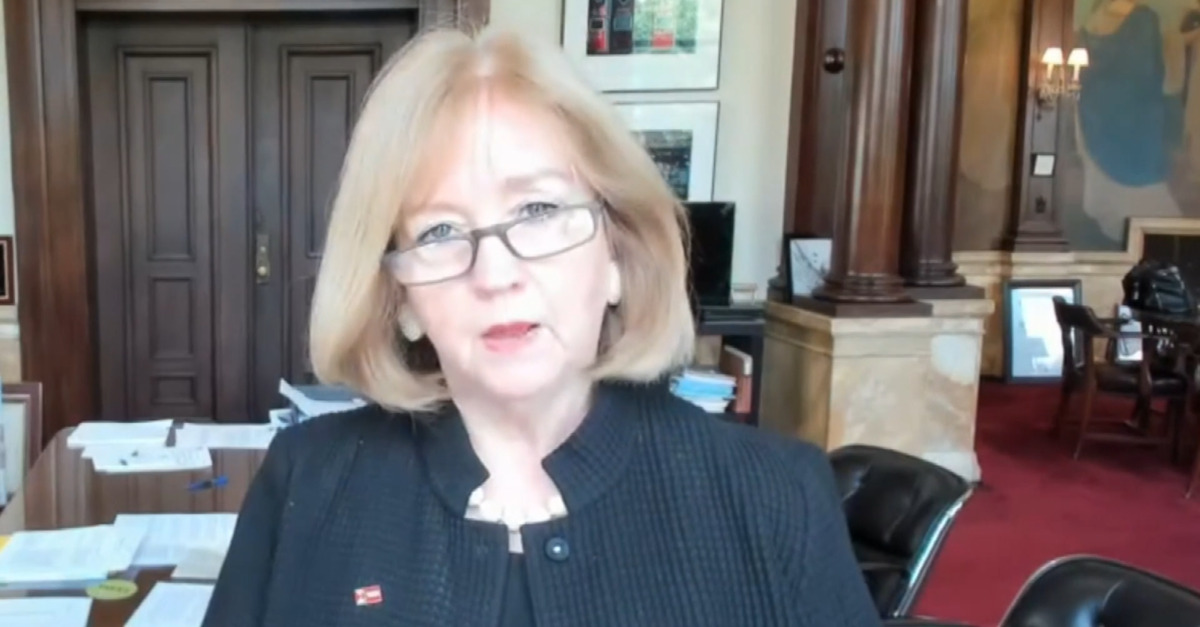 St. Louis Mayor Lyda Krewson is facing massive backlash–including a rising chorus of calls for her resignation–after she read aloud the names and addresses of citizens who had advocated for defunding the city’s police department.

“St. Louis mayor [Lyda Krewson] just went live telling the full names [and] addresses of people wanting to defund the police [and] where they want the money to go,” Ashe wrote. “Yall [sic] she just put a hit out on people. This is a sick and twisted abuse of power and political terrorism.” Police accountability group Cop Watch shared Ashe’s post.

A petition on Change.org calling for Krewson to resign quickly appeared in response to the doxxing scandal. As of this writing, the petition has amassed nearly 24,000 signatures–just shy of organizer Maxi Glamour‘s initial 25,000-signature goal.

“Krewson has been a risk for the safety and well being of the general St. Louis population,” the petition’s description begins–before criticizing the mayor for not addressing “inhumane conditions” at a city-run penitentiary known as the St. Louis Workhouse and for allegedly lying about her efforts to close the institution.

“On June 26th Lyda directly endangered the lives of protesters by releasing their names and addresses,” the broadside continued.

The embattled mayor read the names and addresses of Arch City Defenders members after meeting with them on Friday afternoon.

The multi-disciplined legal advocacy group and members of other civil society organizations conducted a “people’s budget hearing” outside of St. Louis City Hall after reportedly being locked out of the publicly subsidized building. There, the group outlined ideas to increase spending on housing, mental health programs and other social-oriented resources for neighborhoods and families. The additional spending would be offset by substantially reducing funding for police, prosecutors and incarceration, the group suggested.

Krewson and St. Louis Public Safety Director Jimmie Edwards later joined the protesters for a few minutes before leaving after being asked questions about the Workhouse through a bullhorn.

“They are in crisis mode,” she told the St. Louis Post-Dispatch. “They are in spin mode. They know that they’re on the ropes. We have majority support on the Board of Aldermen. We have broad citywide support for defunding the workhouse. I believe they came out here as a photo opportunity to be able to say that protesters were outside and they came outside to speak, especially after they locked the gates.”

After that quick stopover, the mayor held the Facebook Live briefing where she shared the protesters’ addresses and names.

“They presented some papers to me about how they wanted the budget to be spent,” Krewson said while showing a stack of papers containing the activists’ suggestions and information.

After that, Krewson read the person’s name and address out loud to her viewers. She proceeded to do this over and over again. One of the names and addresses she read reportedly belonged to a minor.

“My anger in response to what [Krewson] did today comes in waves,” wrote Action St. Louis Executive Director Kayla Reed. “These were people supporting the work of our organizations. One of the folks she named was a child. Another was one of the organizers on our team at @ActionSTL. This is deeply personal.”

Today, Mayor @LydaKrewson followed in those treacherous footsteps by doxxing protesters who were sharing their views on how they wished their tax dollars would be divested from police & the Workhouse, and reinvested in basic neighborhood resources to combat poverty.

“Today adds to the list of things we never thought we would have to say,” the group added in a statement. “To be clear, it is shocking and misguided for Mayor Lyda Krewson of St. Louis, to broadcast the addresses of those who dare to express a different viewpoint on an issue of public concern. It serves no apparent purpose beyond intimidation. We are stronger when we foster open dialogue. The chilling of debate should bother everyone, no matter whether they agree or disagree with the mayor on this particular issue.”

“I’d like to apologize for identifying individuals who presented letters to me at City Hall today,” the mayor wrote on Twitter. “This was during one of my Facebook updates as I was answering routine questions. Never did I intend to harm anyone or cause distress. The update is removed and again, I apologize.”

[image via screengrab/Facebook/City of St. Louis]