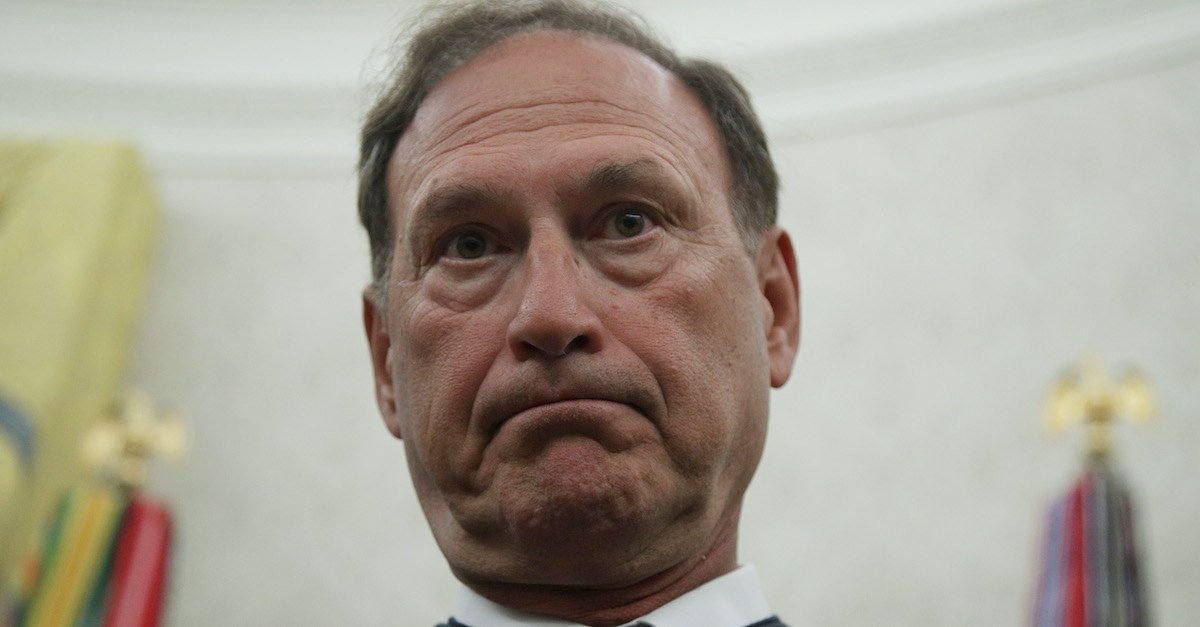 The U.S. Supreme Court remained active on Wednesday afternoon after an at times amusing morning of oral arguments. Critically, the high court declined to take up the case of a golf course owner, a Republican Pennsylvania state political candidate, and other petitioners who challenged Democratic Pennsylvania Gov. Tom Wolf’s coronavirus shutdown orders and who together wanted to see them ruled unconstitutional. (The political candidate who sued is named Danny DeVito — no; he’s not the actor.) Despite conservative Justice Samuel Alito’s initial interest in their cause, the court refused to take the case.

The U.S. Supreme Court has refused to take a case by a Pennsylvania golf course owner, a political candidate, and other petitioners in that state who asked the court to declare shutdown orders by Gov. Tom Wolf unconstitutional. Background: https://t.co/O2K00E11zc @lawcrimenews pic.twitter.com/TeQ0eD9QvG

“The application for stay presented to Justice Alito and by him referred to the Court is denied,” the court said matter of factly when it shut down the litigation.

Here’s how this case quickly came and went. On April 29, Justice Alito expressed interest in hearing arguments from would-be lawmaker DeVito et al., ordering the state to respond to the petitioners’ complaint by Monday, May 4, at noon. The Commonwealth of Pennsylvania replied as ordered.

The petitioners filed further documents which downplayed the severity of COVID-19 pandemic while emphasizing the impact of the response to the pandemic on businesses, the economy, and citizens was essentially worse than the societal cure for the disease. They argued that the novel coronavirus is a “mild illness” for the “overwhelming majority” of people and that the Commonwealth needs to reopen to allow “herd immunity” to develop.

The petitioners also cited the work of Prof. Johan Giesecke, “one of the world’s most senior epidemiologists, an advisor to the Swedish government, the first Chief Scientist of the European Centre for Disease Prevention and Control, and an advisor to the director general of the World Health Organization” according to the petition. The petitioners, citing Giesecke, said that “lockdown policies are not evidence-based,” that infectious disease “models used to support the lockdowns are a dubious basis for public policy,” that “the flattening of the curve is due to the most vulnerable dying first,” and that “COVID-19 is a ‘mild disease’ and similar to the flu.”

The state said, on the other hand, that the petitioners’ application was “remarkable” in its utter legal and scientific deficiency.

“In every conceivable respect, their application is remarkable: it is devoid of any reference to this Court’s legal standards for granting relief; it is premised upon a misapprehension of this Court’s criteria for granting petitions for writs of certiorari; and it reflects an indifference towards the more than 60,000 lives lost to the COVID-19 pandemic so far,” the Commonwealth said.

“Under Pennsylvania law, the Governor is responsible for employing the most efficient and practical means for the prevention and suppression of any disease. In the context of the COVID-19 pandemic, this required delicate balancing: Close too few businesses, and COVID-19 would continue to spread uninterrupted, collapsing our health care system. Close too many businesses, and people would be unable to access life-sustaining supplies. Striking that balance is not only consistent with constitutional principles, it is necessary to their protection,” the state continued.

Fast forward to today, May 6, when the petitioners went right back the well of “indifference” that the Commonwealth accused them of digging.

“First, the Respondents have failed to prove their Executive Order saved even one life; that statement is simply an assumption made upon staggeringly inaccurate projections and reveals a gross misunderstanding about the danger of COVID-19; again, it is only potentially deadly to an infinitesimally small percentage of people,” the petitioners said in what ultimately became an 11th hour filing before the Supreme Court.

They maintained that Wolf “clearly” exceeded his powers as governor in response to the novel coronavirus.

Clearly, the Commonwealth emerged victorious this time; the Supreme Court was not interested in elevating this case any further. There was no stay of Wolf’s shutdown. The Pennsylvania Supreme Court denied the DeVito challenge a couple of weeks back.