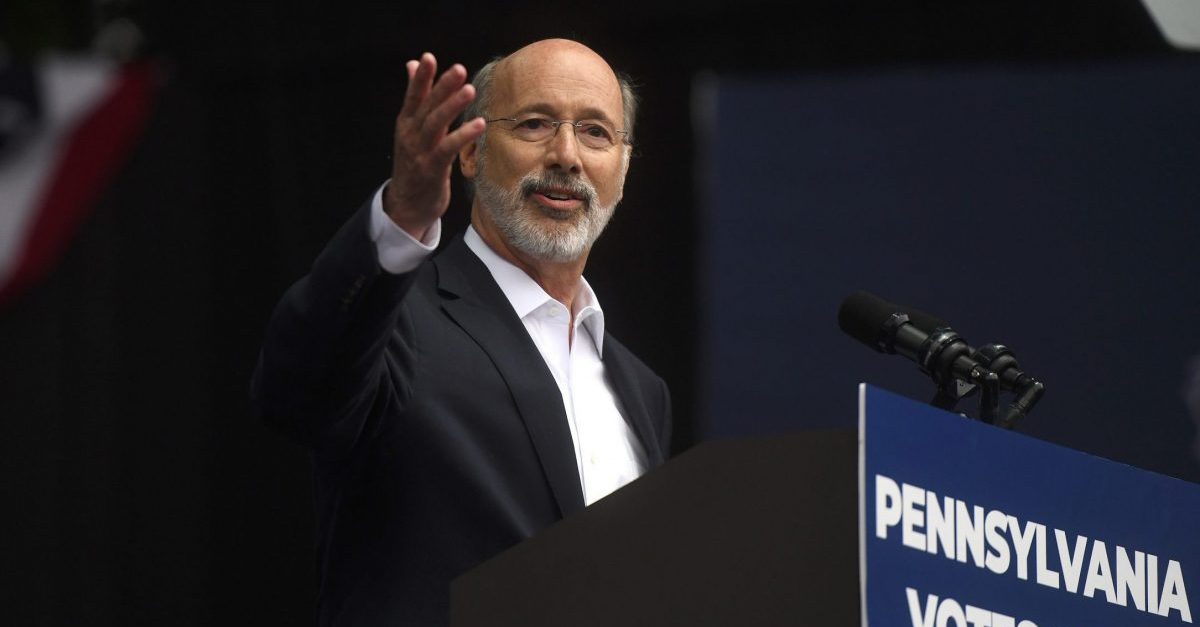 Legal briefs were filed on Monday before the Supreme Court of the United States, as requested by Justice Samuel Alito. A lawsuit by a politician, a golf course owner, and others argues that Pennsylvania Gov. Tom Wolf, a Democrat, acted illegally when he ordered broad swaths of the Commonwealth shut down because of the novel coronavirus pandemic. The petitioners — the golf course owner and the politician — seek to downplay the severity of COVID-19 illnesses. Per their argument, COVID-19 is a “mild illness” for the “overwhelming majority” of people; the Commonwealth needs to reopen to develop “herd immunity” among its populations; most people “will have no serious health consequence” as the result of contracting the virus; and a prolonged shutdown actually harms people because it “weaken[s] their immune systems.”

The Commonwealth of Pennsylvania replied that “a premature precipitous action, according to experts, will cost lives,” and chided the petitioners for submitting a filing “devoid” of proper legal argument, and which “reflects an indifference towards” the loss of life. In the U.S., at the time of this writing, more than 68,000 deaths have been attributed to the novel coronavirus; more than 1 million confirmed cases have been confirmed.

What’s more is this: at some point during the early afternoon hours on Monday, the Supreme Court’s docket page for this case removed links to the petitioners’ arguments.

The petitioners, in an amended application filed Monday, argued that broad government shutdown orders for private businesses and stay-at-home orders for individuals are and were poor public policy. Wolf reopened many Pennsylvania counties while the petitioners’ case was winding quickly through the courts. Among their amended arguments is that the Commonwealth failed its duty to manage the virus where it counted and instead made things worse:

[O]ver sixty-five percent of the COVID-19 deaths have occurred in Pennsylvania’s nursing homes. This is where the risk of serious illness and death is. This is where the Respondents, who are statutorily obligated to regulate these homes, should have employed COVID-19 prevention and mitigation efforts using their statutory powers under the Disease Act, not the indiscriminate and mass closure of tens of thousands of businesses, which included Petitioners where no outbreak or even one infection or death was reported at their businesses and entities.

The petitioners cite to the work of Prof. Johan Giesecke, whom they call “one of the world’s most senior epidemiologists, an advisor to the Swedish government, the first Chief Scientist of the European Centre for Disease Prevention and Control, and an advisor to the director general of the World Health Organization.” The petitioners, citing the professor, say “lockdown policies are not evidence-based,” that infectious disease “models used to support the lockdowns are a dubious basis for public policy,” that “the flattening of the curve is due to the most vulnerable dying first,” and that “COVID-19 is a ‘mild disease’ and similar to the flu.”

Citing Giesecke, the petitioners also argue that the actual “mortality rate will be much lower than the projected numbers because most people who get the disease will never even notice they were infected” and that “novelty of the disease that scared people and made political leaders want to look strong and decisive by ordering lockdowns.”

What should have been done? The petitioners say that the governor should have worked “to protect the elderly and the infirm and to allow the disease to have spread through the population so that herd immunity can work to build the immunity of healthy Pennsylvanians.”

Giesecke’s theories have gained some traction among American conservative news sites such as RealClearPolitics, the Daily Wire, and the National Review, and some have said his views are being used to promote anti-immigration and anti-assimilation nationalist political views. The petitioners argued as follows:

COVID-19 is a mild illness like the flu for the overwhelming majority of people, but can threaten serious harm or death to the elderly and those with underlying health conditions, including those with respiratory ailments and/or co-morbidities. Thus, according to the world renowned epidemiologist, Professor Johan Giesecke, the correct policy would have been to protect the elderly and the infirm, particularly in nursing homes which Respondents are responsible to regulate to ensure the health and safety of the residents there, and to allow the disease to have spread through the population so that herd immunity could work the way it has for millennia. The overwhelming majority of Pennsylvanians have or will have no serious health consequence as a result of this mild illness. In fact, by putting people under shutdown and lockdown, the Governor is harming their health by weakening their immune systems, which they need to ward off COVID-19 and more dangerous communicable diseases.

Legally, the petitioners are arguing that the governor’s executive orders which forced certain business closures are overbroad and violate the commonwealth’s legal police and quarantine powers. They also say the governor’s orders are a violation of the U.S. Constitution’s Due Process Clause, the First Amendment rights to assemble and to speak, and are otherwise arbitrary and capricious.  They’re seeking an order by the U.S. Supreme Court to stay the enforcement of the governor’s executive orders.

During the writing of this piece, a direct link to the petitioners’ amended application disappeared from the Supreme Court’s docket for this case. You can read the full amended application, however, in the reader below. Law&Crime emailed a Supreme Court public information specialist to inquire about the rationale for the document’s disappearance from the main docket page for this case.

A 43-page response by the Commonwealth (which is actually properly formatted, we note) argued that the Supreme Court has “recognized as fundamental, that persons and property are subject to various constraints necessary to serve the general welfare, and that a state’s inherent police powers to protect that welfare are correspondingly broad”:

Under Pennsylvania law, the Governor is responsible for employing the most efficient and practical means for the prevention and suppression of any disease. In the context of the COVID-19 pandemic, this required delicate balancing: Close too few businesses, and COVID-19 would continue to spread uninterrupted, collapsing our health care system. Close too many businesses, and people would be unable to access life-sustaining supplies. Striking that balance is not only consistent with constitutional principles, it is necessary to their protection.

The Commonwealth accused the petitioners of “seek[ing] to upend the status quo” by forcing a “premature[]” opening of “all business locations, regardless of public health data.”

In every conceivable respect, their application is remarkable: it is devoid of any reference to this Court’s legal standards for granting relief; it is premised upon a misapprehension of this Court’s criteria for granting petitions for writs of certiorari; and it reflects an indifference towards the more than 60,000 lives lost to the COVID19 pandemic so far.

Even if there is a valid claim, the Commonwealth says the petitioners should lose: “the liberty secured by the Constitution does not import an absolute right in each person to be, at all times and in all circumstances, wholly freed from restraint,” the Commonwealth argued, citing Jacobson v. Massachusetts, the 1905 mandatory vaccination case. “Under such an absolutist position, liberty itself would be extinguished,” the Commonwealth said, ultimately suggesting that liberty sometimes required restraints on individual acts which could harm others.

Applicants, none of whom are public health experts, assert that the most efficient and practical means to suppress COVID-19 is to determine which Pennsylvanians have the disease and quarantine only them; that Pennsylvania should limit the geographic scope of its shut-down to those counties in which the disease is most prevalent; and that they are beyond the reach of the pandemic because there have been no confirmed cases at their physical locations. This unscientific belief ignores that between 25% and 50% of individuals infected with the virus are asymptomatic, and that the disease has an incubation period of up to 14 days. As the Pennsylvania Supreme Court explained, Applicants’ “argument ignores the nature of this virus and the manner in which it is transmitted.”

The Commonwealth concluded by noting that the U.S. Supreme Court “has been loath to enter into” matters involving “States’ efforts to protect the lives of their citizens” and “should not do so here.”

“It is axiomatic that the Federal government generally lacks police power, which is reserved to the States,” the Commonwealth argued.

UPDATE:  Later in the day Monday, the petitioners filed a supplemental brief, which is similar to the amended application which disappeared from the online docket.  It may be viewed here.

Friends of Danny DeVito, et… by Law&Crime on Scribd

Friends of Danny DeVito, et… by Law&Crime on Scribd

Editor’s note:  this report has been updated to include the supplemental brief referenced above.