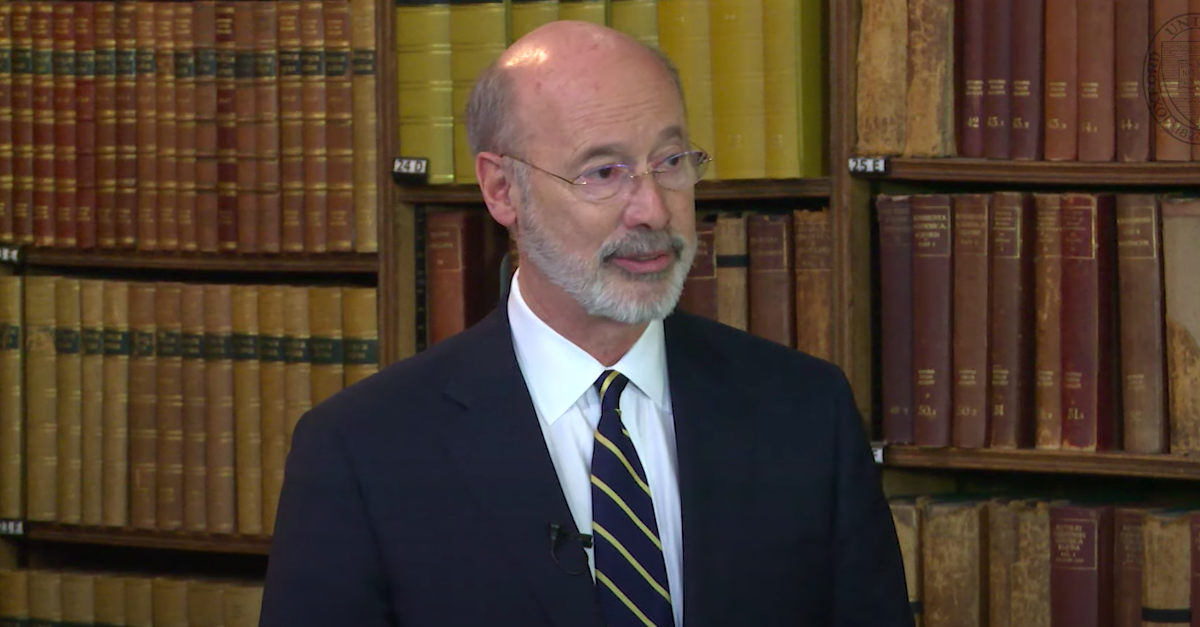 With the delta variant spreading across the United States, a U.S. federal appeals court on Thursday questioned whether lockdown orders issued and blocked a year ago are still relevant in a post-vaccine world.

In March 2020, Pennsylvania Gov. Tom Wolf (D) issued the first of his executive orders restricting public gatherings amid the spread of the coronavirus pandemic. Much has changed since that time.

Months later, those orders were blocked in a scathing ruling last September by U.S. District Judge William Stickman IV, a Donald Trump appointee who found Wolf’s actions ran afoul of the Constitution, even if they were well-intentioned.

“The court closes this opinion as it began, by recognizing that defendants’ actions at issue here were undertaken with the good intention of addressing a public health emergency,” Stickman wrote in his conclusion. “But even in an emergency, the authority of government is not unfettered. The liberties protected by the Constitution are not fair-weather freedoms—in place when times are good but able to be cast aside in times of trouble.”

Pennsylvania’s appeal offered multiple theories why Judge Stickman’s ruling should not stand. The one that appeared to resonate most with the three-judge panel was the argument that the state of the pandemic has changed in Pennsylvania and the rest of the world. All of the governor’s executive orders have now expired. More than half of Pennsylvania residents are fully vaccinated and nearly 65-percent have had at least one dose.

“Cases Are Going Up”

U.S. Circuit Judge Kent A. Jordan, a George W. Bush appointee, grilled Pennsylvania’s lawyer over whether the since-expired orders can be reinstated with reports of an uptick in infections.

“Cases are going up,” Jordan noted. “Delta variant is on the loose.”

“We’re still in the midst of a pandemic,” King said. “We’re still wearing masks in the courtroom. We have the delta variant.”

U.S. Circuit Judge Michael Arthur Chagares, a fellow George W. Bush appointee, noted the common ties between then and now even in his introduction to the proceedings.

“It is wonderful to see faces, albeit with masks on,” Chagares opened the oral arguments by quipping.

U.S. Circuit Judge Patty Shwartz, a Barack Obama appointee, asked whether the governor would have to issue the identical executive orders for Judge Stickman’s order not to be moot.

DeLone replied that was true, a happenstance that he added would be extremely unlikely in a post-vaccine world.

“Anything that is coming up would involve a large portion of the population that has been vaccinated,” DeLone said.

“You are in a Learning Curve”

Pennsylvania also attacked Judge Stickman’s order on the merits, arguing that the lower court characterized the commonwealth’s actions as much more dramatic than they were.

“Judge Stickman seemed to suggest that we were somehow arguing for a suspension of regular constitutional analysis,” DeLone said. “We never did that.”

DeLone added the judge should have afforded Pennsylvania’s public policy makers more deference in light of a public health emergency.

As for Judge Stickman’s belief that the governor’s orders were too restrictive, DeLone conceded: “You know what? He might be right. We don’t dispute his capability to question public policy determinations.”

The deputy attorney general argued that the standard, however, should be rational basis review, a standard that Pennsylvania’s government believed it more than met in light of the deadly pandemic.

“That is a question of whether or not Judge Stickman could have been a better policymaker, and I’m not willing to suggest that he wouldn’t have been,” DeLone said. “I’m just suggesting that in all due respect, that wasn’t what he should have been doing in this instance.”

Judge Chagares grilled the plaintiffs’ counsel on why they oppose a finding that the matter is moot.

If the case is dismissed because the blocked orders have expired, Chagares noted: “You go out a winner, right?”

King agreed, but he said that he did not any order like it to be repeated. The judge noted that he would take the matter right back to the lower court, in that event.