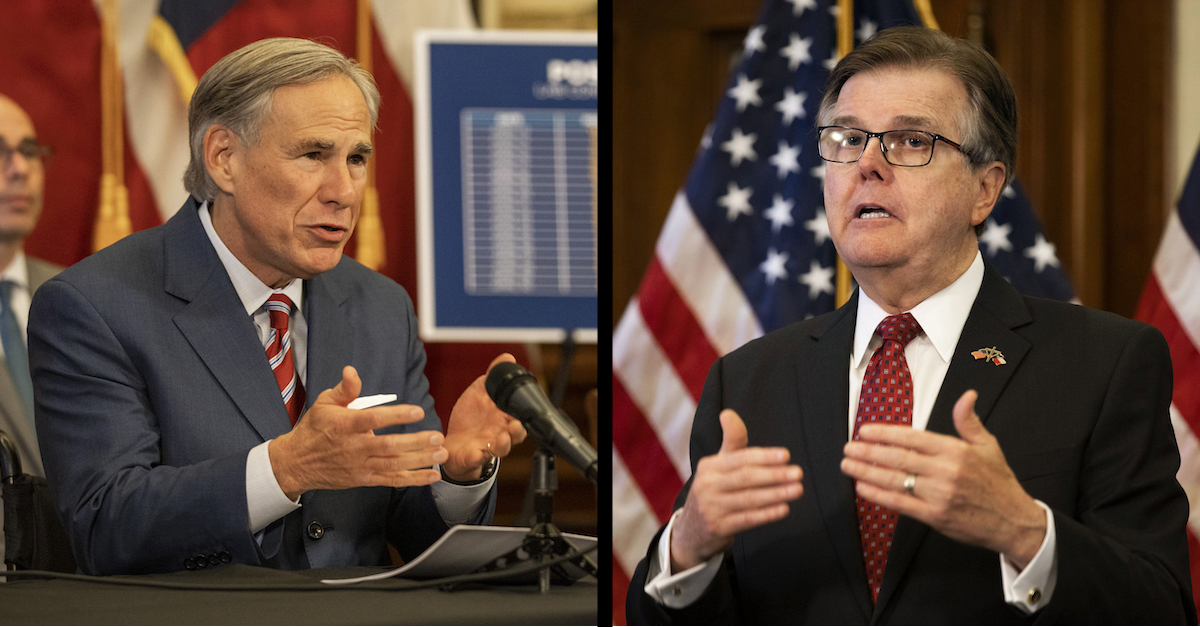 Texas Gov. Greg Abbott, a Republican, on Thursday issued an executive order which makes face masks mandatory as the COVID-19 pandemic spikes in his state.

“I have joined the medical experts in consistently encouraging people to use face coverings, and health authorities have repeatedly emphasized that wearing face coverings is one of the most important and effective tools for reducing the spread of COVID-19,” the executive order stated in part.

The order says face masks are “one of the most important and effective tools for reducing the spread of COVID-19” and that requiring their use “can combat the threat to public health using the least restrictive means.”

In a thinly veiled threat, the order further says “more extreme measures may be avoided” if people abide by the order.

The governor’s core commandment is as follows:

Every person in Texas shall wear a face covering over the nose and mouth when inside a commercial entity or other building or space open to the public, or when in an outdoor public space, wherever it is not feasible to maintain six feet of social distancing from another person not in the same household.

The order contains a list of 11 exemptions, however. They include age and disability exemptions; exemptions for “any person while the person is consuming food or drink, or is seated at a restaurant to eat or drink;” people swimming or exercising; people “actively administering an election;” and people “actively providing or obtaining access to religious worship.” For many individuals in those and other exempt categories, masks are “strongly encouraged.”

Certain counties are also exempt from the order if they have “minimal cases of COVID-19” and if a “county judge has affirmatively opted-out.”

The move comes not long after the lieutenant governor of Texas, Dan Patrick, another Republican, attacked Dr. Anthony Fauci for saying “some” states were reopening too quickly and were “skipping over” some of the necessary steps for reopening safely.

Lt. Gov. Patrick said Tuesday that Fauci “doesn’t know what he’s talking about” and that Texas hadn’t “skipped over anything.”

“The only thing I’m skipping over is listening to him,” Patrick said of Fauci. He also dubiously claimed Fauci “has been wrong every time on every issue” related to the pandemic.

“Texas was one of the first states to begin the reopening process, allowing the stay-at-home order to expire and retail shops, theaters, restaurants and other certain businesses to reopen at 25% capacity,” CNN noted as background.

Patrick in March controversially said older Americans in susceptible groups should gladly exchange their lives for the chance to pass freedom to their children and grandchildren. In April, Patrick said  “there are more important things than living,” and that included “saving this country.”

“I don’t want to die, nobody wants to die, but man, we’ve got to take some risks and get back in the game and get this country back up and running,” Patrick said.

Texas began reopening after Abbott made an announcement April 17. Beaches opened May 1.

“San Antonio on June 15 announced a spike in new cases, the most dramatic increase since the pandemic started,” said Texas NPR affiliate KERA.  “The number of hospitalizations here more than doubled in the last week.”  And that was June 19.

Since then, the number of new cases has continue to spike upward.