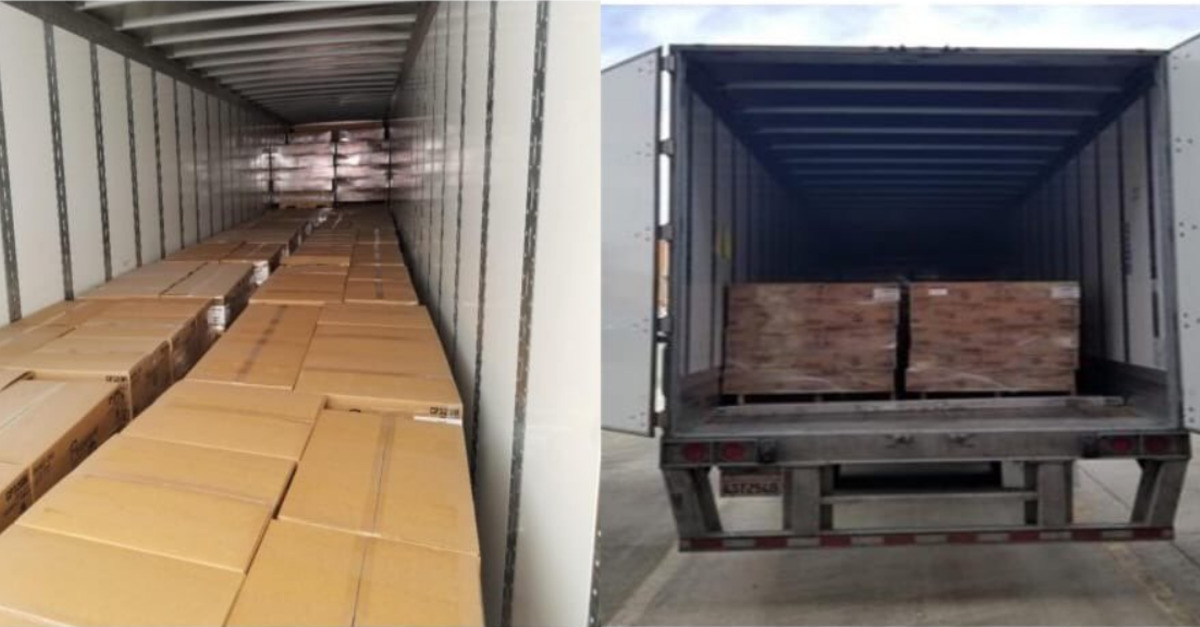 Authorities in North Carolina claim to have come upon a truck being used to contain and conceal some 18,000 rolls of toilet paper.

According to the Guilford County Sheriff’s Office, an 18-wheel tractor-trailer was traveling in an undisclosed direction at an undisclosed speed on I-40 in the tiny town of Whitsett earlier this week.

Sheriff Danny H. Rogers alleged that an investigation of the truck began upon suspicion of a violation of North Carolina Motor Vehicle law, but a press release issued March 18 doesn’t say which one.  Per Rogers, his dogged Specialized Enforcement Unity deputies “followed the vehicle to a warehouse/dock facility a short distance off of the interstate and encountered the driver.”

What happened after that is somewhat unclear because the investigation is ongoing and no arrests have been made, but Rogers insists that trailing the truck in question paid dividends.

“After further investigation, it was determined the 53′ foot Hyundai dry-van trailer was reported stolen locally and was being utilized to transport nearly 18,000 pounds of commercial, bathroom paper products,” the press release continues.

Law&Crime followed up with the Guilford County Special Operations Division for comment and clarification on this story but no response was forthcoming at the time of publication.

Toilet paper has become a microcosmic flash point–a metaphorical story and outrage in miniature–for the novel Coronavirus (COVID-19) pandemic and the resulting panic that has ensued in many parts of the country.

Bath tissue was one of the first major necessities to disappear from grocery, pharmacy and convenience store shelves as reality about the length and severity of the ensuing crisis slowly began to set in. Contemporaneous reports from across the world have resulted in a somewhat bizarre fixation on the basic consumer product — almost to the exclusion of conversations about basic foodstuffs.

There’s an online calculator that alleges to account for how many days’ worth of toilet paper your household has left based on “toilet visits per day” and other assorted factors.

Private companies have even taken to donating toilet paper instead of funds in bids to prove their beneficence.

“There’s an over-representation of fear and people’s minds need to respond to those kinds of feelings,” Peter Noel Murray, a member of the American Psychological Association and the Society for Consumer Psychology told CNBC. “The need for self-affirmation is triggered, and that drives us to do unreasonable things like buying a year’s worth of toilet paper. It overwhelms the knowledge that we don’t need to be doing that.”

Whatever it is that’s overwhelming the American psyche in the mad rush for toilet paper has already lead to instances of violence in Australia and thefts in Nebraska and Florida.

The panic buying has become such a problem that the government has started to notice and issue calls for people to cut it out.

“There’s no reason to buy a hundred roles of toilet paper, there really isn’t,” New York Governor Andrew Cuomo said during a daily Coronavirus address to his Empire State constituents on Saturday morning.

“Where would you even put a hundred rolls of toilet paper?” he asked out loud.

It’s unclear where the Guilford County, North Carolina truckload may have been headed, but we’re curious to find out.