An Idaho woman whose life mission as of late has been to fight against mandatory vaccination requirements has been arrested for trespassing in a city park which was partially closed by the government because of the coronavirus. Her arrest resulted in a counter-protest outside the home of the officer who arrested her, reports say, led by Ammon Bundy, the man who led an armed occupation of an Oregon wildlife refuge in 2016 and who famously escaped punishment for doing so.

Sarah Brady, 40, of Meridian, Idaho, “refused to leave” the playground area of a city park, according to the Meridian Police Department. The police say “several calls” to the Ada County 911 center altered them to a group which had gathered at the playground Tuesday afternoon.

Video that appears to show the police making the arrest has been circulating widely online. Parents in the video questioned how the city could close a public park — which they forcefully argued they had paid taxes to support.  One of the officers on the scene responded that city code allowed the city to close the park. Parents also asked if they would get a “refund” on their tax bills because the park was closed and argued that the city’s move to close its park was “unconstitutional.” One of the officers said the parents should take up their political and legal gripes with the mayor and said he was merely there as an enforcement officer. “Ma’am, don’t get mad at me,” one of the officers said at one point during the conversation. Both the parents and the officers said they were “frustrated” over coronavirus-related closures.

A man said to be with the city parks department is heard in the video saying that the playground was being closed because “the virus stays on plastic for 72 hours” and therefore could remain on playground equipment. The parks employee said the city was “just trying to protect” people. Brady, who was later arrested, retorted that the virus could also remain on items in a local Costco store, which remains open. One parent is heard in the recording sarcastically replying that the city was trying to “protect” people from “getting Vitamin D in the sunshine.”

“We have rights,” and “we’re tired of this,” one of the parents said.

It was difficult at times to ascertain precisely who was speaking during the more than six-minute-long recording.  The sound of wind at times interfered with the clarity of the recording.

The conversation frequently turned to the question of whether the parents would be cited or arrested and which government employee would undertake such an action.

When a city employee appeared to mention social distancing, the parents indignantly asked, “maybe you should stay away from us; do you have the virus?”

Officers finally had enough.  After several further commands that the parents “exit the playground, now,” the parents asked if the police would cite everyone in another area of the park for failing to social distance.  When an officer started counting down a child-discipline-esque five second warning for Brady to leave, Brady said, “arrest me for being in the park — do it!”

As Brady put her hands behind her back turned her back to the officer, she told whomever was recording the video to keep recording.  Another parent, presumably the one making the recording, said, “officer, you don’t want to do that,” as the officer obliged by arresting Brady.

Brady wanted to know if she was being arrested or detained and demanded that someone call the Idaho Freedom Foundation, a group which states that one of its goals is to “free people from government dependency.”  Other parents started yelling that Brady’s kids were present, questioned who would attend to the kids, and complained that Brady was being arrested for being in a “public park.”

No person in any park shall fail or refuse to comply with directions given by police officers or duly authorized representatives of the director in regulating the time, place, and manner of any activity in any park when necessary to maximize use and secure the comfort or convenience of all park users.

Any section or part of any park may be declared closed to the public by the Director at any time and for any interval of time, either temporarily or at regularly and/or stated intervals and either entirely or merely to certain uses, as the Director shall find reasonably necessary.

Those code provisions are not new; they date to 2013.

The Idaho Freedom Foundation’s communications director said Thursday that his group “knew about” a “planned protest” in the park by mothers who “used social media groups … to spread the word” about their actions, but that “no IFF staffers” were “in attendance.” Per that post online:

Two weeks ago, the Idaho Freedom Foundation solicited stories from Idahoans about how the stay-home [orders from the government] had affected the lives and businesses. We received more than 600 tales of economic devastation, depression, anxiety, and fear. Moms and dads are worried about putting food on the table. Businesses are on the verge of losing every damn thing.

We knew we had to act. We knew we had to do something to help people save their homes, jobs, and businesses. So, we encouraged people to take matters into their own hands — safely. Some won’t note that, but I want to make it clear that we have always encouraged businesses to find ways to open safely. And many have.

The police department contested the parents’ claims in the video that the park was “public” when the arrest occurred.

The officers explained that it was “the play structure,” not the entire park, which was closed, the news release said, and that Brady and whomever else was gathered with her could use other parts of the park. Brady wouldn’t budge, the police department said.

“Meridian officers made several attempts to help B[rady] adhere to the rules. She was non-compliant and forced officers to place her under arrest to resolve the issue. She was arrested for trespassing,” a misdemeanor, they said.

The police department again suggested it was reluctant to make the move: “These are very trying times and the Meridian Police Department supports the public’s right to assemble for peaceful protest, however the right does not include damaging public property or ignoring closures of City property and facilities.” 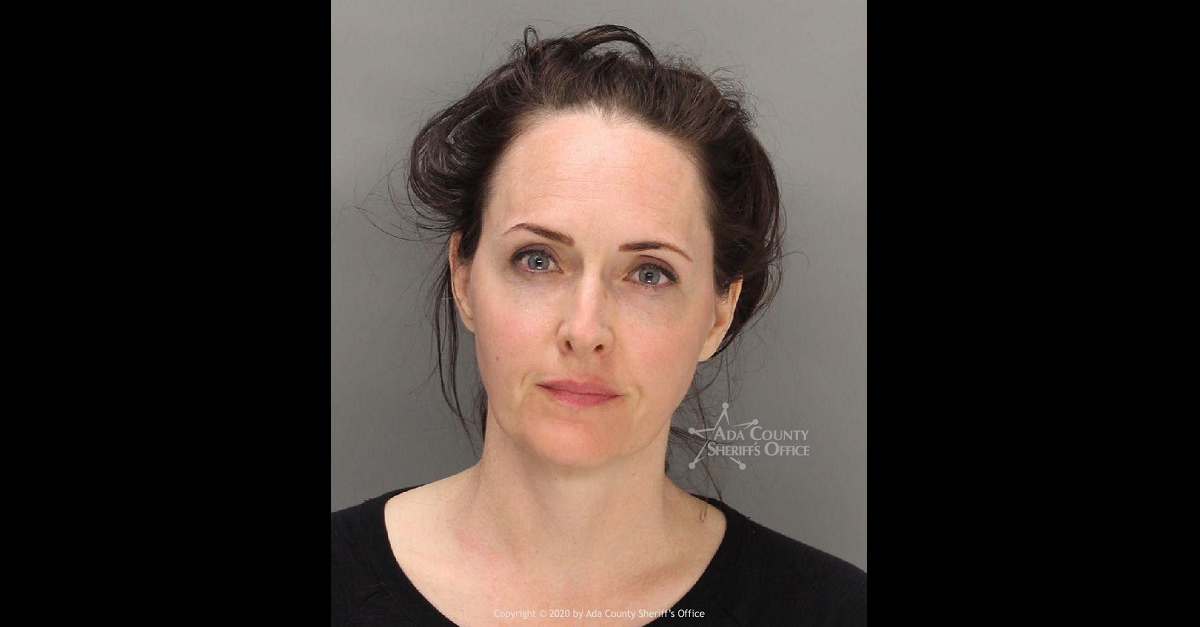 Brady was booked into the Ada County, Idaho Jail, posed a $300 cash bond, and was released, according to court records reviewed by Law&Crime. She is scheduled to appear in court on May 29.

The state statute Brady is accused of breaking reads as follows:

Authorities are seeking against Brady the least severe trespassing punishment on the books.  It carries up to a six-month sentence and a fine of between $500 and $1,000.

The counter-protest led by Bundy was not the only one. Another was held outside the police department. Brady attended.