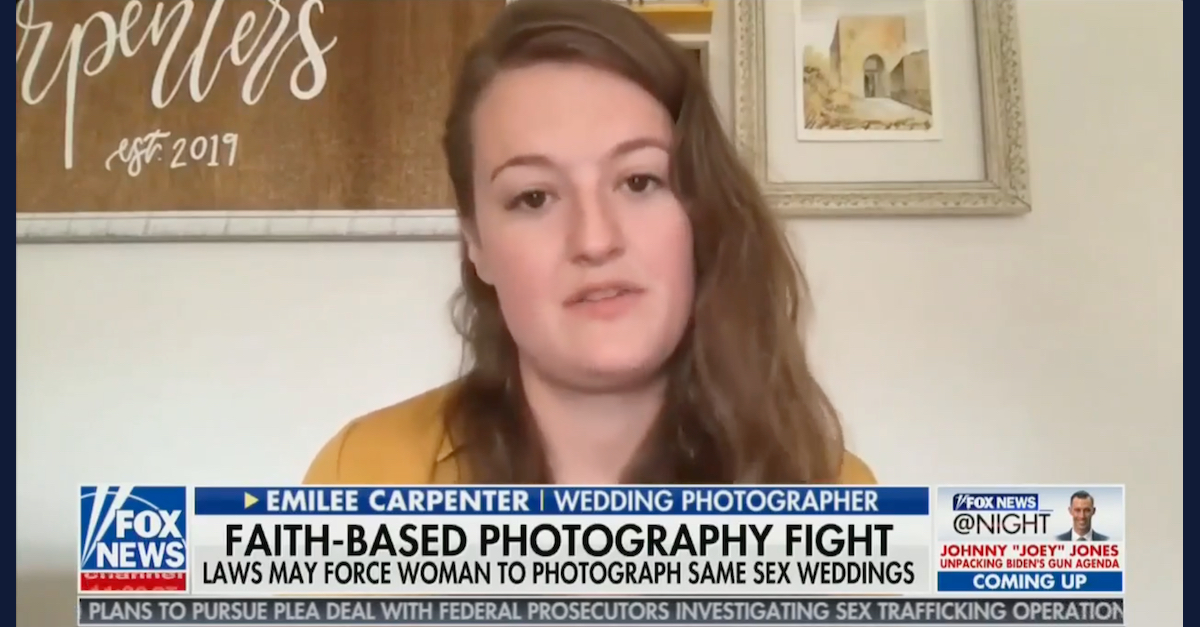 Emilee Carpenter is seen in a Fox News Channel screengrab.

An Upstate New York wedding photographer has lost her bid to refuse service to same-sex couples after a federal judge dismissed with prejudice her lawsuit against the state.

Emilee Carpenter, a photographer and blogger based in the Southern Tier, sued the state in April, alleging that the state’s human rights law violated her First Amendment rights to free speech, free association, and free religious expression. She also said the law violated the establishment clause and her right to due process.

Carpenter said that the law violates her First Amendment right to freely exercise her religion because she uses her wedding photography business to exercise and express her religious beliefs about marriage.

In a ruling issued Monday, U.S. District Judge Frank P. Geraci Jr. said that he did not find Carpenter’s arguments persuasive and that the state’s human rights law is neutral.

“The mere fact that a state enforces its public accommodation laws notwithstanding the religious motivations of the accommodation does not evince impermissible hostility” toward religion, Geraci wrote.

Carpenter also said that requiring her to photograph same-sex weddings would force her to “participate in religious exercises contrary to [her] sincere religious beliefs,” since it is her practice to “celebrate the wedding,” “follow[] the officiant’s instructions,” “sing,” and pray at opposite-sex weddings.

Geraci, a Barack Obama appointee, said that Carpenter, as a photographer, is not required to do those things at any event she photographs.

“Insofar as those activities are not services that Plaintiff is hired to provide, the laws would not compel Plaintiff to participate in any religious exercises at same-sex weddings just because she chooses to actively and religiously participate in them when she photographs opposite-sex weddings,” Geraci wrote. “The religious activities occurring at a wedding, whether for a same-sex couple or an opposite-sex couple, are directed at the couple, the friends, the family, and any other invitees in attendance. They are not directed at the caterer, the florist, or the photographer.”

“This court decision is a huge victory in our pursuit to ensure that every New Yorker has equal access and equal protections under the law,” James said in a statement. “The LGBTQ+ community is an integral part of New York, and no New Yorker should be excluded or turned away from a business or denied a service because of their sexual orientation or gender identity. Love is love, which is why my office will always fight to ensure that all New Yorkers are treated equally under the law.”

The conservative Alliance Defending Freedom, which represent Carpenter, said in a statement that it would appeal the ruling to the U.S. Court of Appeals for the Second Circuit.

“The court’s decision continues down a dangerous path of the government compelling artists to speak messages that violate their religious beliefs — or imposing steep fines, closing their businesses, or throwing them in jail,” said ADF Senior Counsel Jonathan Scruggs. “Artists like Emilee and Lorie Smith in Colorado are protected under the Constitution to freely live and work according to their religious beliefs. Yet the 10th Circuit’s Orwellian decision in 303 Creative v. Elenis opened the door for government officials to compel all manner of speech — forcing total compliance of state-approved speech or be treated as criminals. Emilee and Lorie happily serve all people; they just cannot promote messages which contradict their religious beliefs, including their views on marriage. We earnestly hope the Supreme Court will hear Lorie’s case and protect the constitutional freedoms for all Americans, including creative professionals like Lorie and Emilee.”