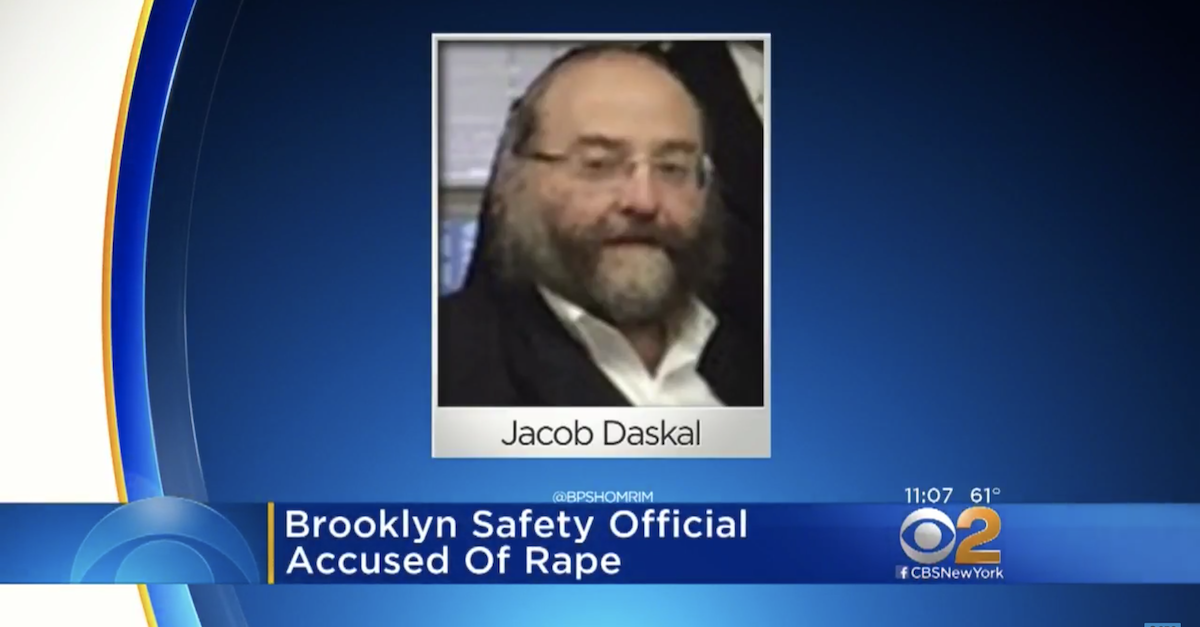 The founder of a Jewish neighborhood watch group accused of raping a 15-year-old girl has been charged by federal prosecutors, nearly three years after his arrest by local authorities in Brooklyn for the same alleged crimes.

Jacob “Yanky” Daskal, the politically connected founder of the Shomrim’s division in Brooklyn’s Boro Park, was first charged three years ago with repeatedly raping a minor inside his Brooklyn home.

With his case currently pending in state court there, a grand jury in the Eastern District of New York leveled three more serious charges against Daskal alleging the 62-year-old coerced, enticed and transported a minor, charged that carry the potential for life imprisonment.

“As alleged, Daskal, who was almost 60 years old when these crimes were committed, exploited the vulnerability of a young teenager by grooming her for sex and enticing her into having sexual relations with him,” U.S. Attorney Seth DuCharme wrote in a statement. “Protecting underage minors from flagrant sexual abuse and predators like the defendant will always be a high priority of this Office and the Department of Justice.”

Daskal groomed the teenager for sex inside his home in Brooklyn, N.Y. and summer home in South Fallsburg, N.Y. in 2017, prosecutors say.

“At the end of August, the defendant, his family and the victim returned full-time to his house in Brooklyn, where the abuse continued,” the government’s memo seeking Daskal’s detention states. “As the school year started, the defendant helped the victim find a new school in Chicago, Illinois, and, in October 2017, she moved there to attend that school and live with another family. While the victim was in Chicago, the defendant and the victim communicated via text message and over Skype video chat. The defendant requested that the victim pose nude for him during video chats and send him nude photographs.”

Daskal allegedly traveled to Chicago to visit the girl early that November.

“The defendant booked a hotel room in Chicago, and he brought the victim to that room for sexual intercourse and oral sex,” his detention memo alleges. “He flew back to New York that evening less than ten hours after he had arrived.”

Calling the evidence against Daskal strong, prosecutors claim the case is supported by cell-site records, a forensic digital trail and hotel and airline records from his trip to Chicago.

“Although the defendant does not have a criminal history before his May 2018 arrest, the brazenness and callousness of the defendant’s conduct in the instant case, particularly when coupled with his abuse of his position of power in the Orthodox Jewish community and as an associate of the NYPD, reveals his total disregard for the law and the well-being of others,” prosecutors wrote.

The FBI’s Assistant Director William Sweeney echoed that sentiment in a statement.

““A man who founded an organization aimed at creating a safer community should know the difference between right and wrong,” he wrote.

Daskal’s attorney Henry Mazurek told Law&Crime that he is grateful that a federal judge released his client over the government’s objection.

“Mr. Daskal has been fighting these same charges in state court over the last three years and will continue to do so now,” Mazurek wrote in an email. “He denies any inappropriate sexual relationship with the alleged victim.”

Update—5:40 p.m. CT: This story has been updated to add a comment from Daskal’s attorney, who reiterated his client’s denial and reported that a federal judge released him over the government’s objection.

Read the indictment and detention memo below: