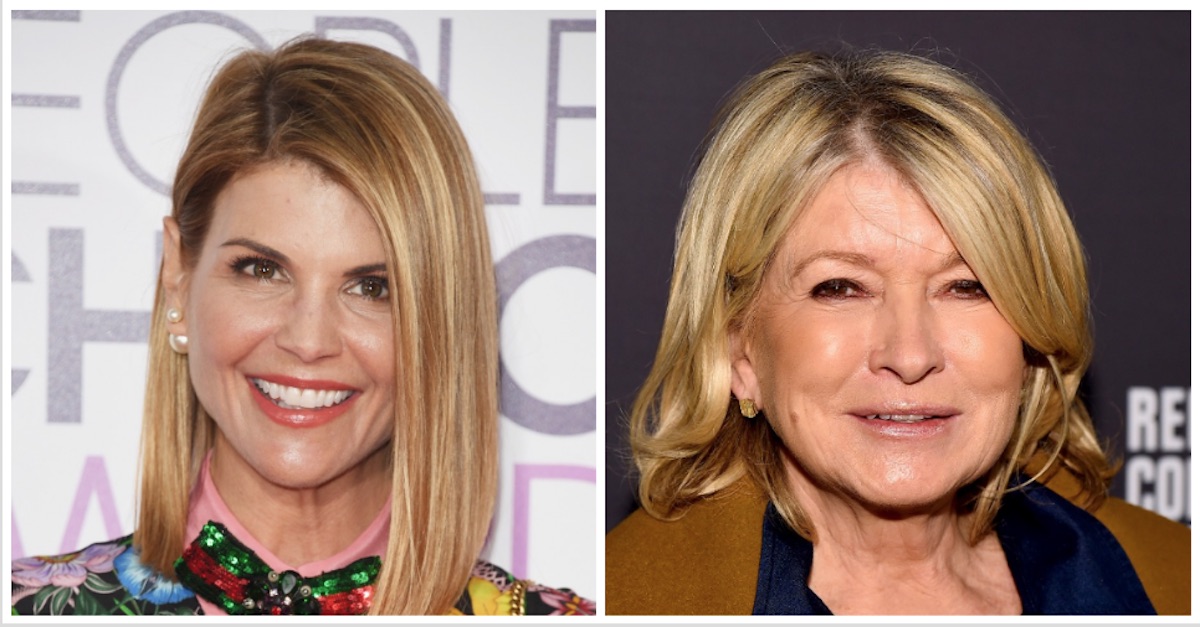 Full House actress Lori Loughlin appears to be more concerned about optics and preserving her “squeaky clean reputation” than she is about about legal danger, despite the advice of crisis management executives. One person Loughlin purportedly hopes to emulate is Martha Stewart, since Stewart was neither ostracized from elite circles nor shunned by longtime fans after she emerged from prison.

The anonymous crisis management executives told CNN that Loughlin and her fashion designer husband Mossimo Giannulli are deeply concerned about their rapidly eroding images and are looking for solutions to reverse that.

“[Loughlin] has been having preliminary talks with some top crisis management firms on what she can do to change the public perception,” one executive said, adding that it was their opinion that Loughlin “thinks she’s going to not serve jail time and return to work.” The resuscitation of Martha Stewart’s career is said to have specifically come up in conversation.

“It’s killing her that her squeaky clean reputation has done a total 180,” this executive continued. “She reads everything that’s written about her, and she’s already thinking about how she can turn her image around.”

The second executive basically said that Loughlin and her husband are putting the cart before the horse.

“Resolving the legal situation should be [their] primary focus,” the anonymous individual in the know said. “Once that is resolved, [they] can then turn to how to reclaim their image and brand.”

Also in the CNN report, it should be noted, was comment from Loughlin’s publicist Elizabeth Much. She suggested that the unnamed executives, and other people commenting in the press about Loughlin and Giannulli’s thoughts “are trying to get attention.”

Much said the couple is “focusing on their legal case” and that “[t]here is no crisis PR team being brought in.”

Loughlin’s professional life has already suffered. Hallmark, for instance, was quick to jettison her from its ranks. The professional damage extended to Loughlin’s daughter Olivia Jade Giannulli, after it was revealed that both she and her sister Isabella posed on rowing machines for pictures that were used in fake crew recruit profiles. Neither of them had ever participated in crew.

Loughlin and Mossimo Giannulli were initially charged for conspiracy to commit mail fraud and honest services mail fraud for allegedly paying $500,000 in bribes to get their daughters into USC.  Both were arrested and released from custody after paying $1 million bond. After not jumping at the chance to take possible plea deals, ostensibly because they do not believe they should spend any time behind bars, federal prosecutors slapped them with money laundering charges.

After the initial charges were announced, Olivia Jade received a lot of backlash, especially because people immediately recalled a YouTube video in which she said she didn’t “really care” about school.

“I don’t know how much of school I’m gonna attend … I do want the experience of like game days, partying … I don’t really care about school, as you guys all know,” she said at the time. She later apologized to her nearly 2 million YouTube subscribers.

“A lot of people like to attack me for the way I’ve grown up because it’s really different from a lot of people, and so anything I say that’s remotely ignorant or bratty or something that I genuinely don’t mean, it gets so much backlash,” she said.

As for Martha Stewart? She spent five months behind bars from 2004-2005 for admittedly lying about a trade. She received more than a thousand letters from sympathetic fans. After her prison stay, Stewart said that she “plan[ned] to be No. 1.”

“When you are prosecuted in such a way, and a great portion of wealth is dissipated, all I can think, so much, is what I could’ve done with all of that for the good of mankind,” she said. “And — and I hope I can continue.”

Interestingly, Lori Loughlin’s Hollywood peer Felicity Huffman was recently mentioned in the same breath as Stewart. Huffman was one of the parents charged in the massive college cheating scam.

Unlike Loughlin, Huffman pleaded guilty early to conspiracy to commit mail fraud and honest services mail fraud, as part of a bribery scheme to ensure her child would get into the school of her choice. Huffman faces a prison stint that is pretty similar to Stewart’s and it was suggested that, because of this and her acceptance of responsibility, she has a good chance of rehabbing her image.

One of the crisis management executives mentioned above said that the same was possible for Loughlin. The executive also questioned the timing of such an effort.

“Do I think [Loughlin] can come back? Yes. Being imperfect and explaining things from a parenting perspective can make her relatable when the time is right,” the exec said.