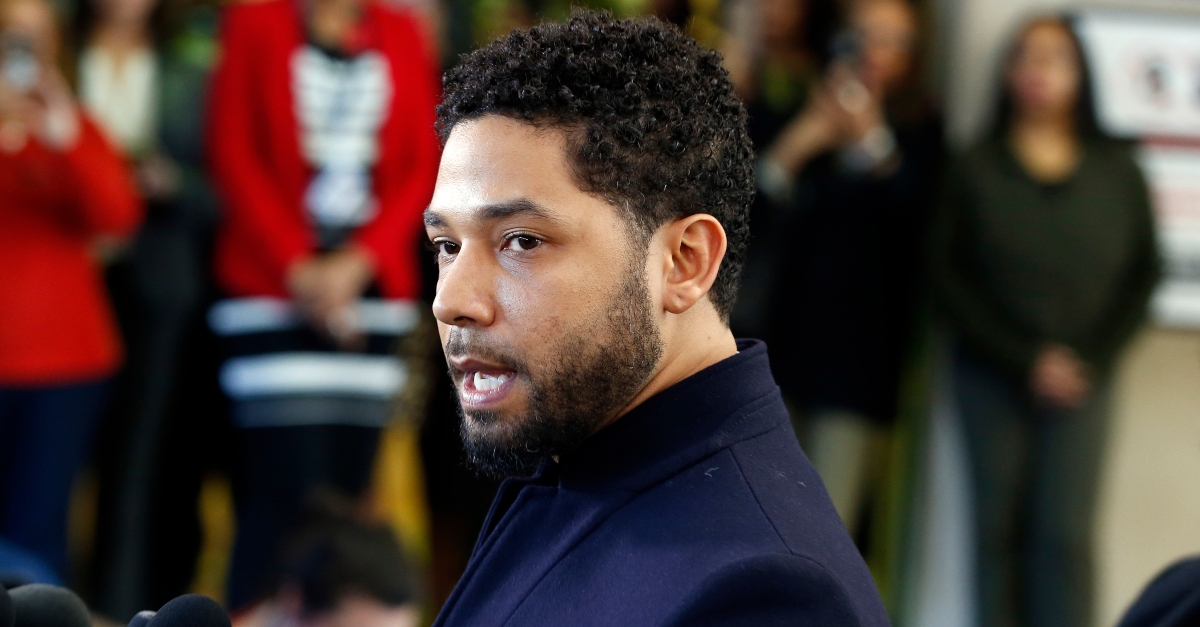 A Chicago jury on Thursday evening convicted former “Empire” actor Jussie Smollett, 39, of staging a fake racist and homophobic hate crime against himself in early 2019. Smollett, according to prosecutors, concocted the entire affair involving a makeshift noose, the supposed pouring of bleach, and the purported claim that the attackers yelled, “This is MAGA country.”

Smollet lied to the Chicago Police Department about what occurred, prosecutors told a jury. The jury agreed. Smollett was found guilty on the first five of the six disorderly conduct charges he faced in total. The jury issued a not guilty verdict on the six and final count.

“There was no hoax,” Smollett said from the witness stand, according to the Associated Press.  (He previously said claims that he made the incident up were “bullshit.”)

At trial, Smollett insisted that “he was the victim of a real hate crime,” the AP reported; the defendant said the two fellow actors, who are brothers, were “liars” for suggesting that a $3,500 check Smollett wrote to them was part of the alleged scheme to fake the incident.  Instead, Smollett testified that the money changed hands for a workout plan and a meal plan that the brothers had crafted for him.

Smollett’s attorneys said the two brothers — Abel Osundairo and Ola Osundairo — attacked Smollett because he is gay and Black. Both of the brothers are also Black. The defense attorneys also claimed the brothers Osundairo tried to shake Smollett out of $1 million — a supposed payoff to preclude their testimony for the state.

Prosecutors said Smollett faked the affair because he wanted to create favorable and sympathetic publicity.

The two brothers testified that Smollett asked them to participate in the hoax near the actor’s home in January 2019.

Ola Osundairo is in the overflow flow room for the Smollett verdict pic.twitter.com/kr7ibuJhZ9

Smollett was charged with six counts of disorderly conduct, a Class 4 felony with a possible prison sentence of up to three years.

Initial charges against Smollett were suddenly and surprisingly dropped. A special prosecutor reexamined the case and subsequently secured the six-count indictment.

“The jury deliberated for just over nine hours Wednesday and Thursday after a roughly one-week trial,” the AP noted. Six men and six women were on the panel, according to the Chicago Tribune. Thirteen witnesses testified in total.

Smollett was not immediately taken into custody.  Additional proceedings were scheduled for January.

Kasey Chronis, a reporter from Chicago FOX affiliate WFLD-TV, said the courtroom was “stoic” when the verdicts were read.  No one had a noticeable reaction, she reported live from the scene. 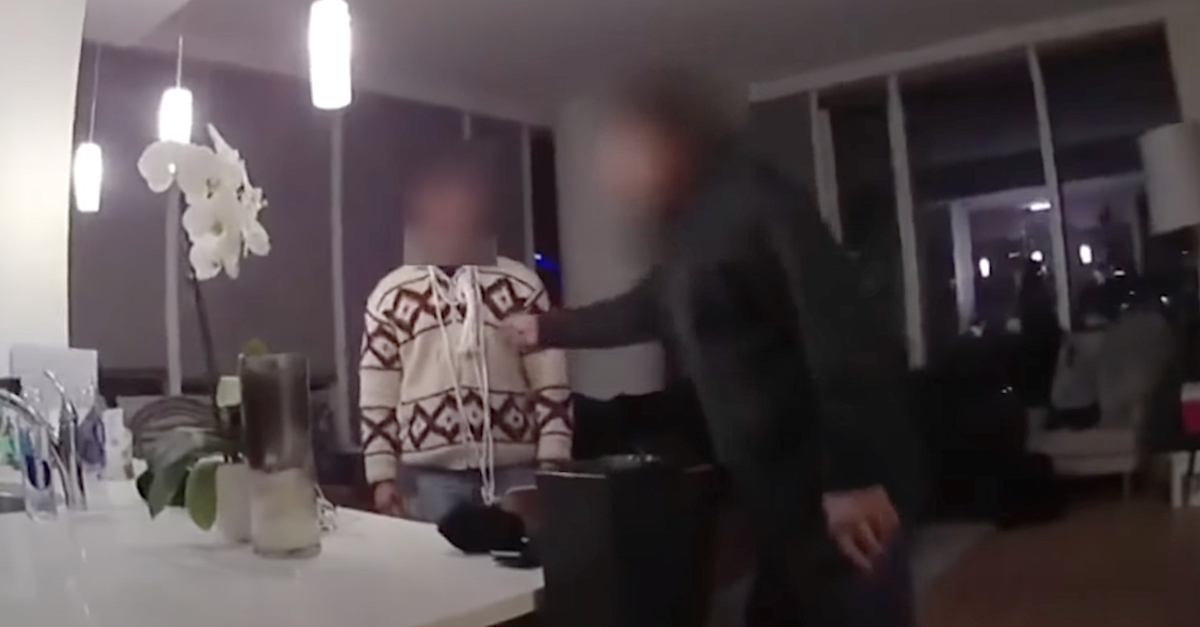 “That really compounded his misconduct,” Webb continued.  “We don’t expect defendants to do that . . . defendants do not have a right to go in front of a jury and lie under oath.  Mr. Smollett would not have lost this case, as he did today, unless the jury found that he lied to them.”

Given the procedural history, Webb said the fact that the case made it to a public trial was a victory in and of itself.

Webb noted that the sixth count, which resulted in an acquittal, involved statements Smollett made two weeks after the date of the initial alleged attack.

“It wasn’t that significant to our case,” Webb said.

Webb then backed up the Chicago Police Department, who he said “took it seriously” when Smollett made the initial report.  He said 26 officers spent 3,000 hours of time “for a fake crime that never occurred.”

The special prosecutor said the Chicago Police Department “maybe” was “not perfect” in a general sense, but he said the verdict against Smollett was a “complete vindication” of the way officers handled this case.

Webb said Smollett claimed he left his apartment at about 2 o’clock in the morning to buy eggs — an explanation the prosecutor called “ridiculous.”

Gloria Schmidt Rodriguez, an attorney for the Osundairo brothers, said her clients “could not be more thrilled and pleased” with the outcome.

“There is a lot of healing that needs to happen,” Schmidt Rodriguez said.

She then praised the local press corps in Chicago and slammed the national press corps for the way they respectively handled the case.

“To the national media out there who just ran with this story:  let’s turn down the sensationalism and let’s turn up the journalism,” she chided.  “You have great role models right here — sitting right here.”

Speaking generally, Schmidt Rodriguez said “humans will forgive you” if you make a mistake or commit a transgression — but then come clean.

Nenye Uche, an attorney for Smollett, said after court that the verdict was “inconsistent” and would be won “on appeal.”

“He’s innocent,” Uche said of his convicted client. “This is an innocent man.”

The attack — and the alleged MAGA reference from the purported attackers — led to significant commentary from politicians and candidates, including now-President Joe Biden and now-Vice President Kamala Harris. Original tweets the duo issued when the incident originally occurred were still online as the verdict against Smollett was read. 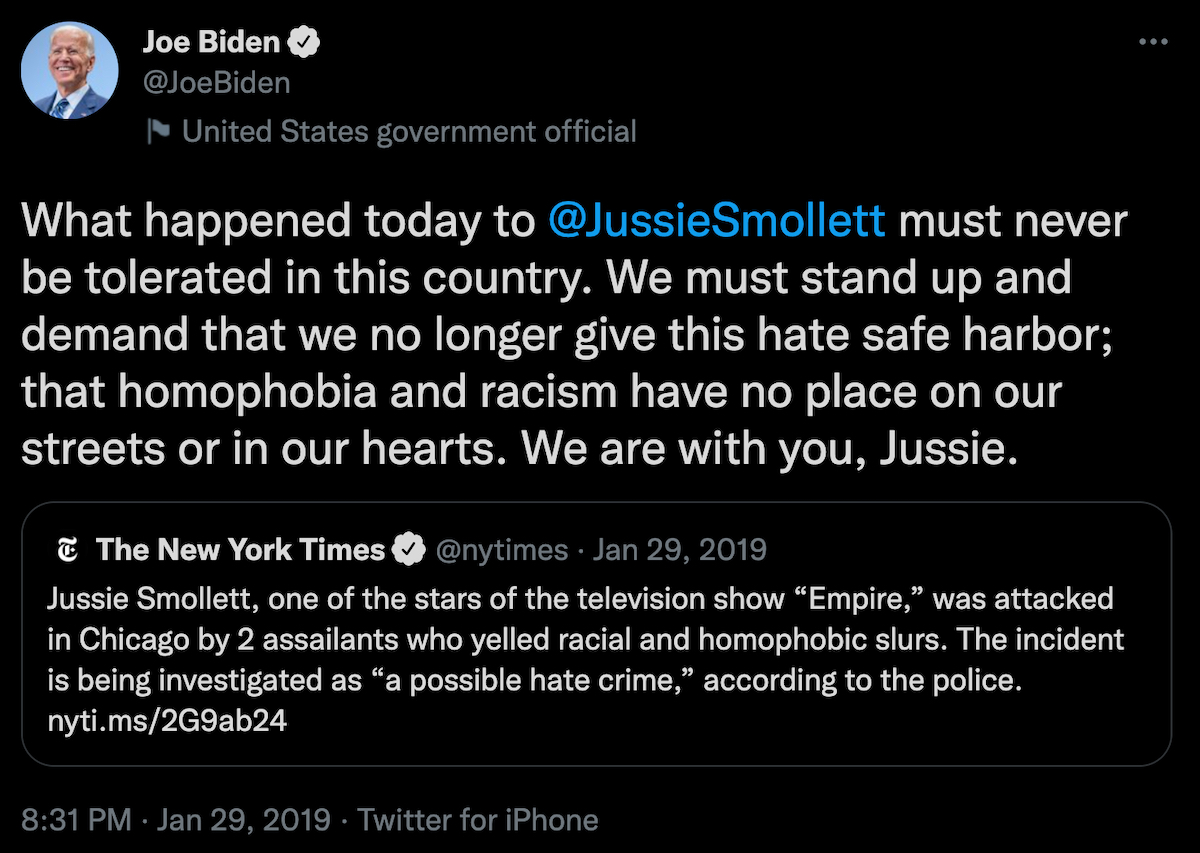 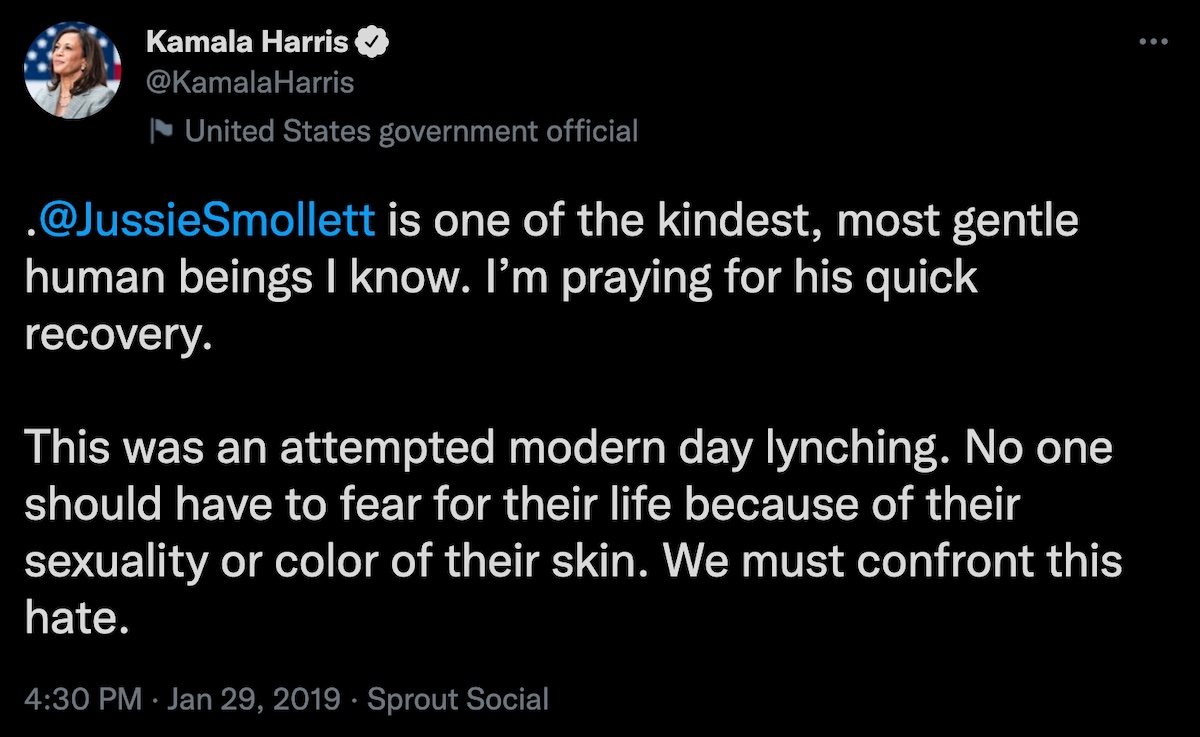 This report has been updated.