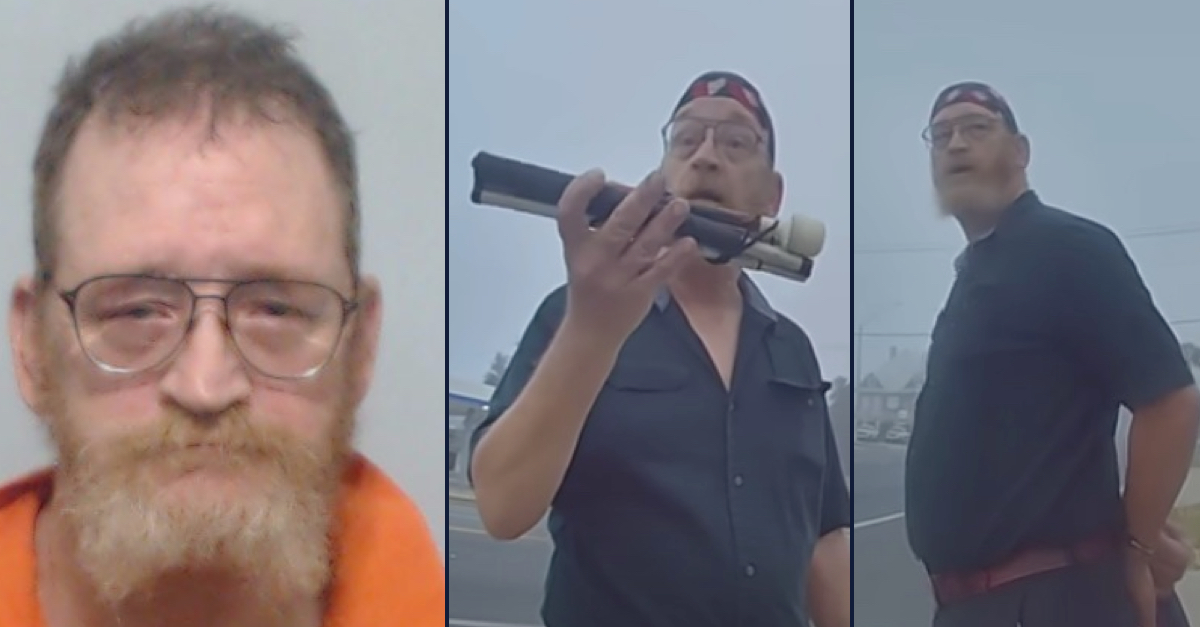 A Florida sheriff’s office is looking into the actions taken by two deputies who appear to detain and handcuff a visually-impaired man who was walking with a folded cane in his back pocket.

James Hodges, 61, was stopped by two deputies from the Columbia County (Fla.) Sheriff’s Office on Oct. 31. Body-worn camera footage shows one deputy, a woman, approaching Hodges as he walked on the sidewalk.

“What’s this in your back pocket?” she asks. “I just saw you walking.”

“Yeah, I am, actually,” the deputy says.

The woman then asks Hodges for his name and date of birth. Hodges refuses to provide that information, saying that she doesn’t have the proper grounds to make such a request.

“Do you want me to put you in handcuffs right now?” the deputy asks.

“What is your suspicion?” Hodges asks in response.

“It looked like you were carrying a gun in your back pocket,” the deputy explains. “I’m stopping to make sure you’re carrying it properly.”

Hodges quickly takes the folded cane out of his back pocket, showing it to her.

“Am I being detained?” he asks.

The deputy says tells Hodges that he is and asks him for his ID. He demands to see her supervisor, who happens to be the other deputy at the scene. That deputy says that the folded-up cane could look like a firearm and explains to Hodges that his partner thought the man was armed.

“But now she’s verified that I am not armed,” Hodges says, again refusing to provide his ID.

That’s when the deputies put him in handcuffs and appear to take his driver’s license out of his pocket.

The deputies then handcuff him and ask where his driver’s license is, and take his driver license out of his pocket.

After Hodges is placed in handcuffs, he is seen on the footage standing in front of the male deputy. Both are facing the street. Shortly after an ambulance drives by, the male deputy starts talking directly with Hodges.

“Sir, are you legally blind?” the deputy asks.

“Yes I am,” Hodges says. After a few moments of silence, he continues: “I had to walk up here in the dark, for jury duty, which was cancelled.”

“Why weren’t you using the stick?” the male deputy asked the handcuffed man. “You don’t have to use your stick all the time?”

“Not all the time,” Hodges replied.

The deputy who first approached Hodges then appears to begin to approach Hodges with his documents.

“It’s gonna be,” Hodges replied. “I want your name and your badge number.”

At that, the male deputy, appearing annoyed, intervenes.

“You know what, put him in jail for resisting,” he says as he walks out of the frame of his partner’s body-worn camera.

“I want your name and badge number too, sir!” Hodges yells at the man.

County jail records show that Hodges was booked into the county jail on Oct. 31 at 8:25 a.m. on a charge of resisting an officer. He was released the next day at 10:25 a.m.

The status of the charges was not immediately clear as of Monday. The sheriff’s office said that it is investigating.

“We are aware of the Columbia County Sheriff’s Office body camera video involving the arrest of Mr. James Hodges on October 31, 2022,” the office of Sheriff Mark Hunter said in a statement posted to its website on Monday. “Sheriff Hunter is troubled by what he has seen in the video and the matter is being addressed. An administrative investigation was initiated on November 3, 2022 when the incident was brought to our attention. If policy violations are sustained at the conclusion of that investigation, appropriate action will be taken. While we understand the frustration and concern associated with this event, please know we are working to resolve this matter as quickly as possible.