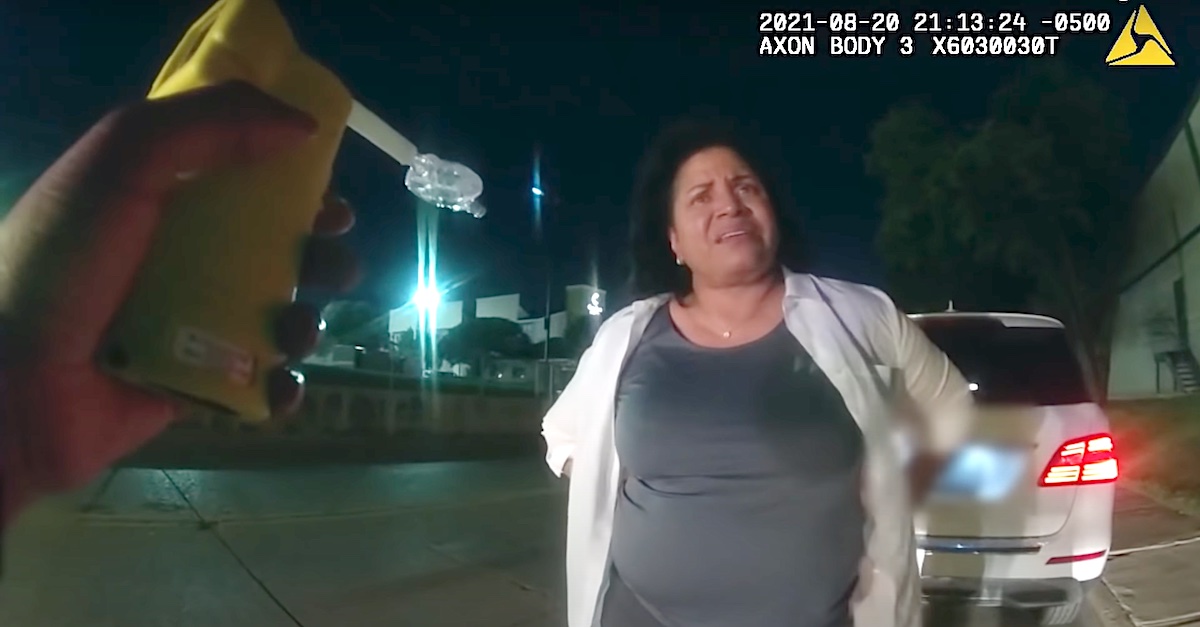 Angela West is asked to take a breath alcohol test.

Police in Dallas have released dashboard and body camera video of the arrest of Angela West, the wife of Republican gubernatorial candidate and retired Army Lt. Colonel Allen West. And they’ve released affidavits connected to Mrs. West’s arrest which shed at least some new light on the accusations West’s family staunchly deny but which police seem to be seeing through.

Angela West is charged with driving while intoxicated with a child under 15 years old inside her vehicle, according to court records. The alleged offense is a felony. The incident which led to her arrest occurred Friday night.

The videos show a white SUV driving on a highway. Its passenger-side tires crossed a solid white line into what appeared to be the margin of the road on two occasions. The officer driving the cruiser which was following the vehicle initiated a traffic stop at about 36 seconds into the footage. The white SUV stopped behind a tractor trailer in a middle lane. It remained there after traffic continued moving along. An officer approached the driver’s side of the SUV and appears to have asked the driver to pull to the shoulder of the road. The driver then pulled over and stopped on the side of the road immediately in front of a traffic light at an intersection about 3:20 into the recording. The officer then approached the white SUV and appears to have told the driver to turn onto a side street. The driver turned right and stopped a short distance away from the intersection about five minutes into the video. 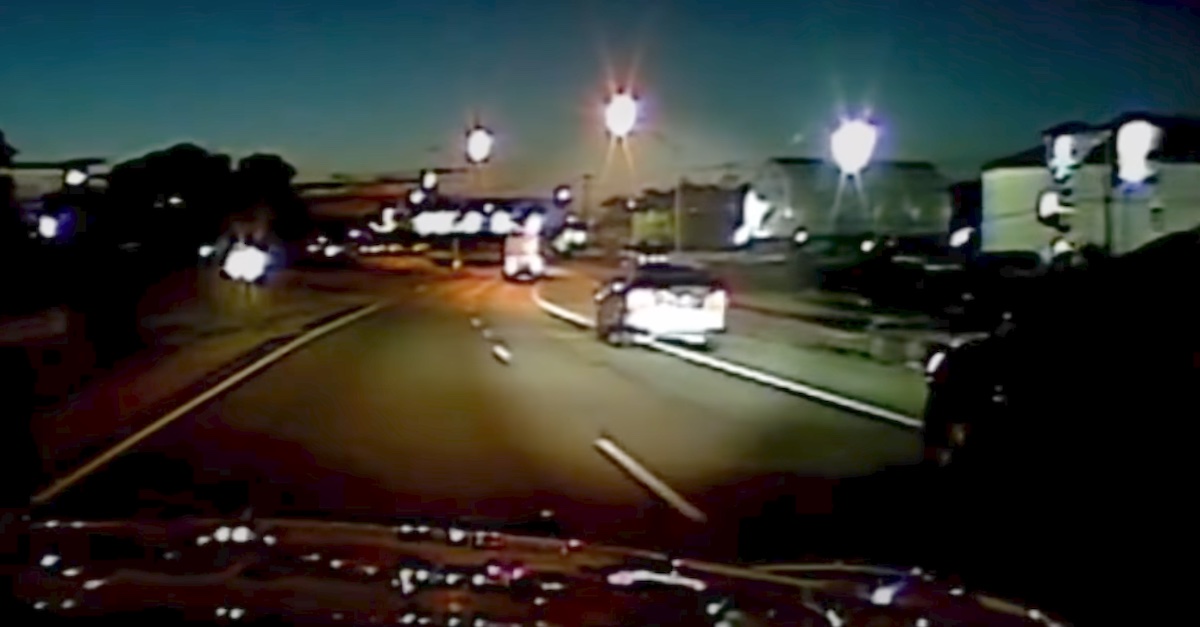 The video then cuts to an officer’s body cam recording. Two squad cars were on the scene. The officer wearing the body camera asks another officer to keep an “eye on the baby.” Then came a series of drunk driving tests. The Horizontal Gaze Nystagmus was not fully captured on video due to the movement of the officer’s body camera. An officer then asked West to walk an “imaginary” line (there was no actual line on the road) by placing her heel to her toe for nine paces — which she was asked to count out loud while keeping her arms to her side. Then, at the end, West was expected to keep her front foot on the imaginary line, to turn by taking small steps with her right foot, and to return to her starting point by making nine additional heel-to-toe paces.

Once West walked the paces, she asked the officer for help.

“I already gave you the instructions,” the officer said.

West, looking perplexed, walked back to her starting point taking paces with a stride that appeared to be well beyond the heel-to-toe instructions — but the angle of the body camera video again fails to show West’s complete stride. West then continued to make two and a half additional laps along the course — three-and-a-half laps in total, so to speak — despite being instructed to walk nine paces, turn, and walk nine paces back. 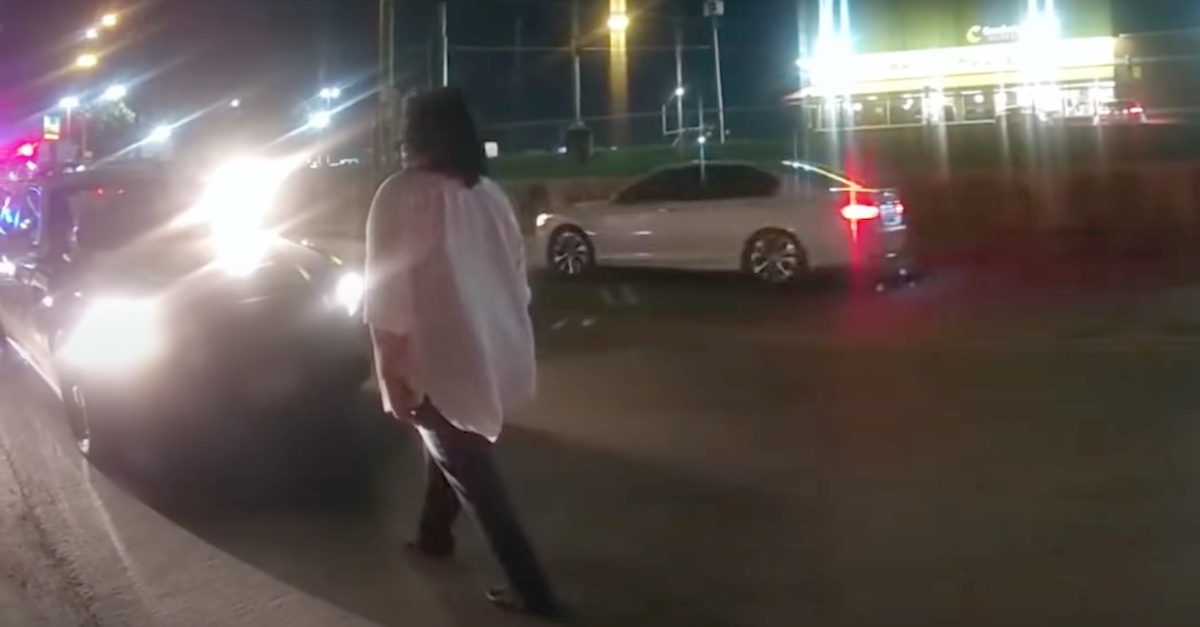 Angela West is seen on body camera video walking “heel to toe” at an officer’s instruction.

After the three-and-a-half laps, West asked if she was done.

“I can’t tell you to stop; you have to stop on your own,” the officer replied.

“I don’t know; you’re giving me the test,” West replied. She indicated she’d never been issued a traffic ticket. “I don’t know what to do,” she continued.

West continued to implore about the point of the matter; the officer finally told her she could just “relax.”

West started to ask questions and suggested that she might not be able to complete the test. Her actual reason was cut out of the available video, but she appeared to be expressing a medical reason. (She and her attorney discussed her medical situation later in several press interviews, as we shall explain below.)

West attempted the test but did not count aloud as instructed. 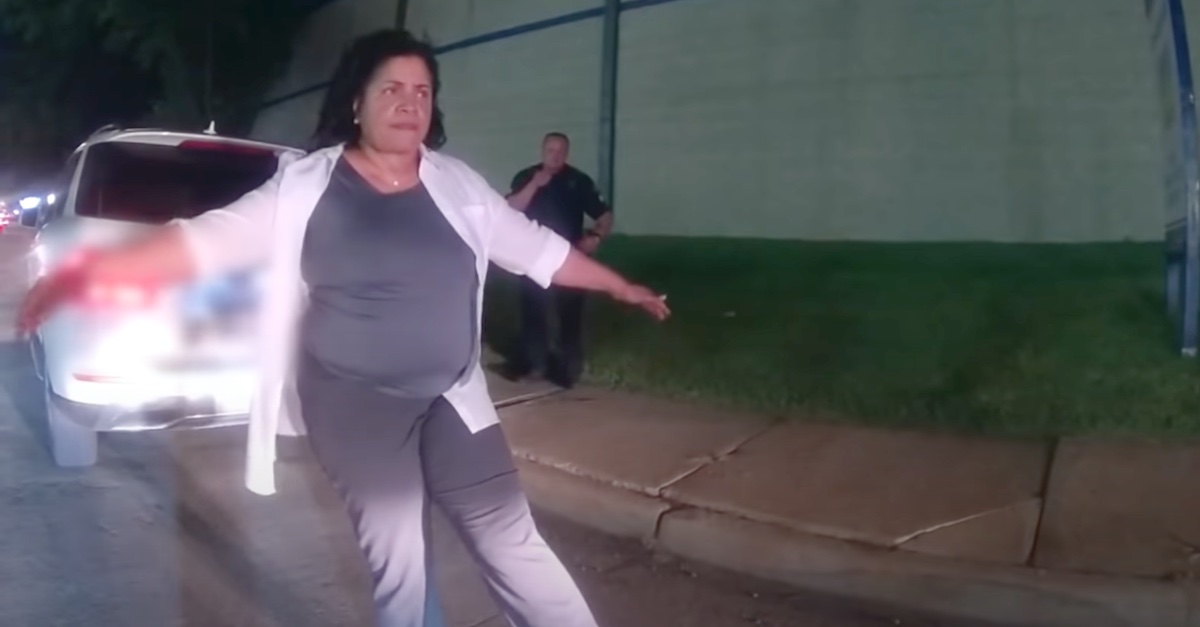 Angela West performs a one-leg stand after suggesting she may not be able to do so because of a health condition.

The officer then pulled a breathalyzer from a kit and asked West if she would “be willing” to submit to the test.

“Have you ever blown into a balloon before?” the officer asked.

After a few seconds of cross-talk, West seemed surprised that she was being asked to submit to the test.

“You’re giving me a breathalyzer?” West asked. “For what?”

“What did I do other than not stay — switch lanes without — I mean, give me a citation? You’ve put me through all of this now! Alright; fine; okay.”

West attempted to blow a quick puff into the device; it wasn’t enough. The officer asked her to try again; she did — again emitting a series of quick puffs between breaths into the end of the device.

The officer told her to blow a consistent breath into the breathalyzer. 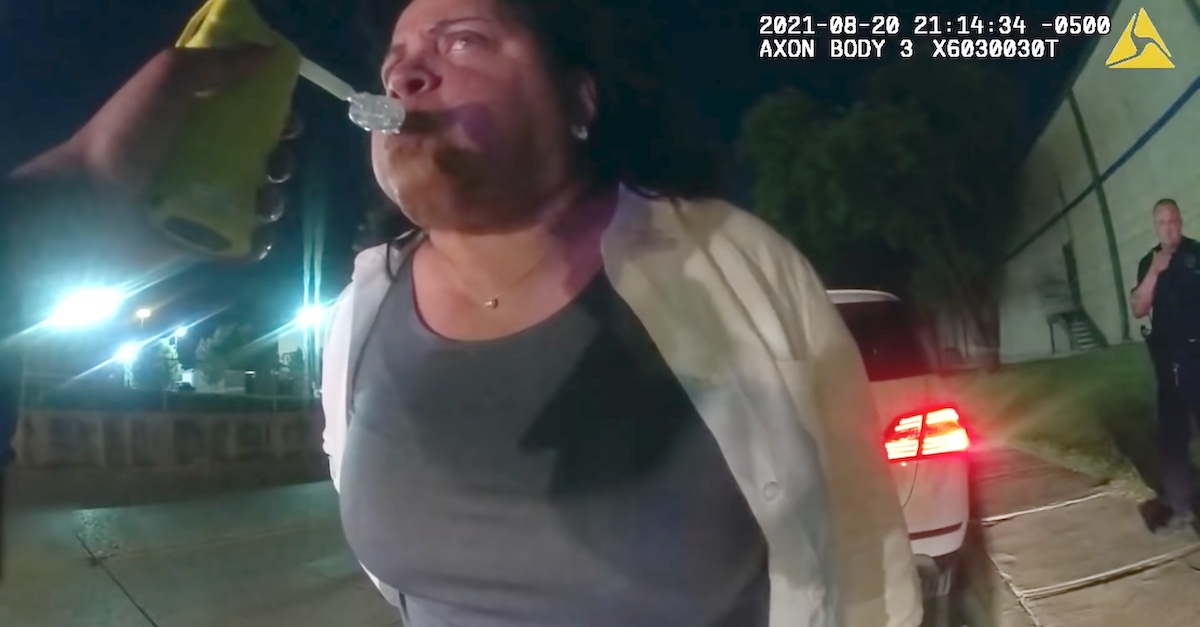 Angela West attempts to submit to a breath test for the presence of alcohol.

She tried yet again several more times but was unable to blow a consistent breath. Therefore, the device did not register her suspected blood alcohol level.

West then said her grandson was in the car. The officer asked if someone else could pick the child up. The officer then placed West under arrest.

“What you witnessed and what I witnessed in a further review of this certainly was not what has been depicted in social media,” Garcia said. “Listen. When we’re wrong, we’re wrong, and we will hold ourselves accountable. But no police chief can sit idly by while his officers get falsely vilified. False representations about my officers cannot go unchecked. They work too hard and they sacrifice too much.”

Garcia seemed to be issuing a thinly veiled reply to Allen West’s steadfast defense of his wife on social media.

“The results of the breathalyzer were inconclusive because the test wasn’t done properly,” Garcia noted when referencing the defendant’s apparent inability to deliver a proper sample into the device.

“I did not see” a lack of professionalism during the encounter, the chief said further.

West told Dallas CBS affiliate KTVT on Monday that she ordered Chilean sea bass at a restaurant and drank lemonade before driving home. She said that her vehicle’s navigation system told her to move over two lines and that when she did so, she saw the police trying to pull her over. She also presented the television station with a blood test she obtained for herself on Monday which she claimed had indicated she had neither drugs or alcohol in the 80 hours prior to the stop.

“I have had an aneurysm so I’m a little off balance sometimes,” West said regarding the tests officered asked her to perform on the side of the road. “I walked back and forth. I spoke to her. I told her I had Chilean sea bass I wasn’t slurring my words.”

West’s attorney backed up that claim in an interview with the Texas Tribune.

“She told the officer about it and there’s no mention anywhere in the . . . probable cause affidavit that this woman had some health issues that could affect her performance or mask themselves as signs of intoxication,” defense attorney Todd Shapiro told the news organization.

According to KTVT, the police chief indicated that a presumably separate blood test administered by the police would prove whether or not West had been drinking.

Citing court records, ABC affiliate WFAA-TV reported that the police obtained a McDonald’s cup from West’s vehicle which officers believed “smelled of alcohol.” But WFAA also said that Garcia indicated the police did not test the contents of the cup.

Those same records obtained by WFAA alleged that West’s eyes were bloodshot, her “reaction times were delayed,” and that “West seemed confused and did not understand initial commands” given to her by an officer on the scene.

Law&Crime reached out to the Dallas Police Department for copies of the relevant documents, but they said we would need to obtain them from a clerk’s office. The relevant clerk’s office has not as of the time of this report provided the documents pursuant to Law&Crime’s request to review them.

Other court records indicate that the case is being prosecuted under the name Angela Michelle Graham West. A judge set the defendant’s bail at $7,500 given the “safety of the victim/community” and the “facts of offense.”

Watch the video of the arrest below: