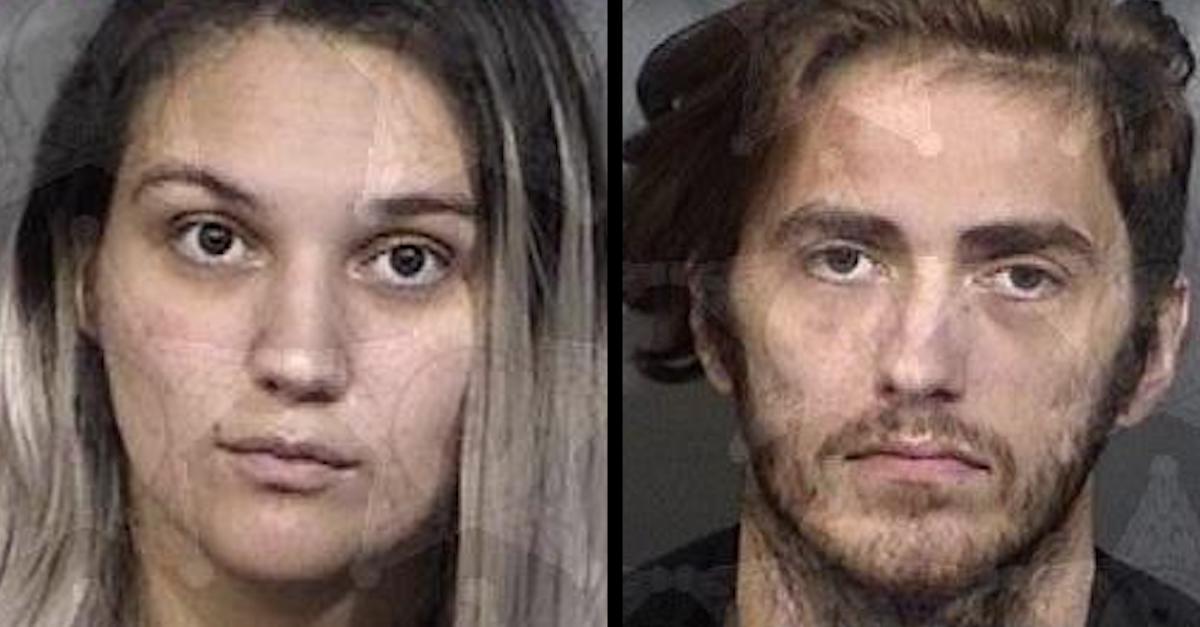 Prosecutors in Brevard County, Florida are seeking the death penalty against a couple who allegedly beat the woman’s 3-year-old son for weeks. As part of the aggravating factors, the state called Joshua Andrew Manns, 25, and Erica Beth Dotson, 27, killing the boy “especially heinous, atrocious, or cruel” under the law.

Court records have identified the victim as Jameson Nance.

Other aggravating factors are:

Manns and Dotson have pleaded not guilty to charges of first-degree murder, the aforementioned aggravated child abuse, and aggravated manslaughter of a child, and felony child abuse.

Nance died on June 11 while Manns was supposed to be taking care of him, according to affidavits. A downstairs neighbor allegedly heard loud banging that morning.

“They described the nose in that it sounded like a bowling ball being thrown around,” police wrote. “They could not recall hearing any screaming, yelling or crying and as such did not report this unusual noise to anyone. This would have been the day and time that Manns was left home with the child, while [redacted] was at work.”

Investigators believed the couple was treating the child at home instead of taking him for medical help, citing evidence at the scene including empty bottles of children’s Tylenol and homemade cold compresses. A medical examiner determined Nance’s body showed evidence of abuse from at least a two- to three-week period, as well as two previous broken tibias dating back to February 2019, authorities said.

Text messages between the couple allegedly showed them discussing his injuries and how to treat them.

The account for the first incident is that the child broke his leg tripping over his biological father’s legs (not Manns’). The second incident allegedly happened because the child stepped off a high curb. According to investigators, the Department of Children and Families looked into the first incident. The 3-year-old had allegedly told daycare staff that Manns burned him, and that the suspect would hit him in the head if he was loud and woke up Manns and a person whose name was redacted in the affidavit.

Daycare worked allegedly noted injuries to the boy’s face on June 2, the last day he attended the facility. The story they got is that a duck attacked Nance, police said. Here is an alleged text message exchange between the suspects providing insight into the duck attack story, as previously reported by Law&Crime:

Manns:  “[Redacted, but presumably the boy’s name] ran from a duck.  And like tumble rolled down the sidewalk.”

Manns:  Yeah, he definitely fucked himself up but not like serious.  His leg is fine too.”

Dotson:  Is he bleeding?  Scraped up?

Manns:  He’s fine.  He’s probably gonna be bruised up for sure.  He literally hit the ground rolling.  I had to like jump over him and stop him from going in the lake.

Dotson:  Oh my gosh.  Was it hilarious or scary?

Manns:  The duck did that stupid ass hissing shit and flapped his wings and bro just hit the flintstones feet, but forgot he was [redacted] so he made it all of 20 feet before he ate shit.  It was scary as fuck at first because he like smacked the sidewalk and like sonic the hedgehog rolled toward the lake.  But after I caught him and made sure he was fine I definitely laughed.  He didn’t appreciate that.  The only place he was bleeding from was his ear.  And that scab busted on his hiad.

Dotson:  Oh my gosh . . . How is he handling it?  Did you give him some Tylenol already?

Manns:  Yeah I did.  He’s fine though.  I’m just not prepared for how many bruises he’s gonna get from this lmao.  Like I don’t see any yet except by his poor little ear.  It was such a tiny cut but it was like the tip of it basically so it bled a little more and he like freaked out at first but calmed down when we got cleaned up.