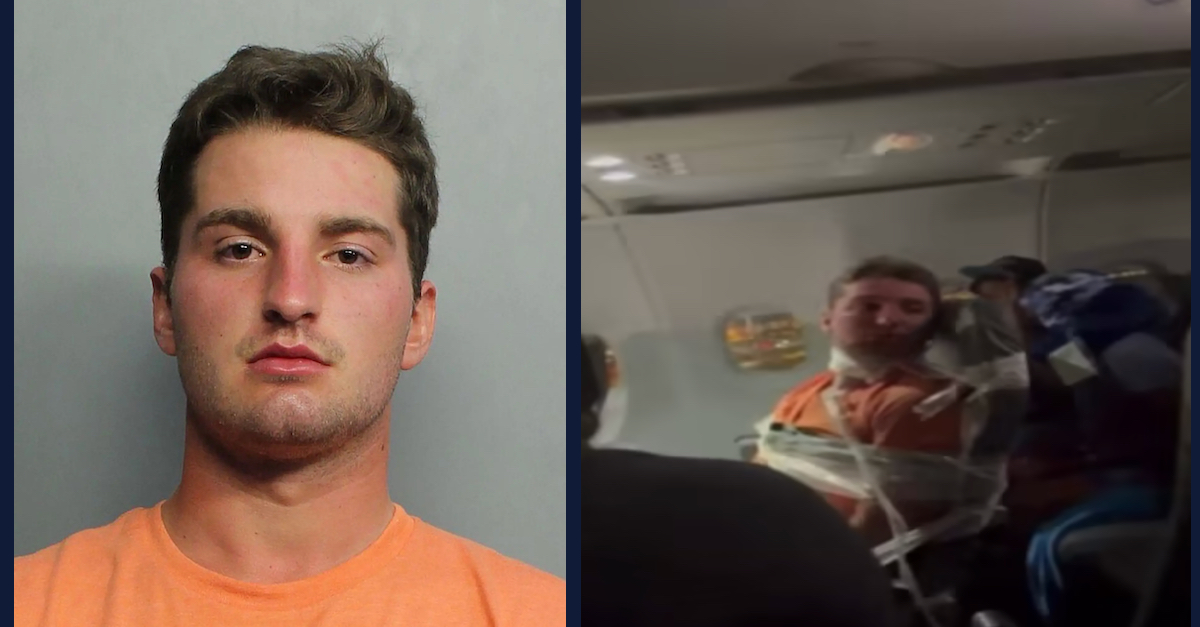 An Ohio man who was duct-taped on a commercial airplane during the summer of 2021 after an in-flight attack on multiple flight attendants was sentenced in federal court on Tuesday.

Maxwell Berry, 23, pleaded guilty to three counts of assault within a maritime and territorial jurisdiction — a special statute that was applied to his flight to Miami, Fla. from Philadelphia, Pa.  All of the counts are misdemeanors, according to a charging document.

Under the law, the defendant was charged with the lowest level of assault, simple assault, over his outburst and faced one-and-a-half years in prison. Under the terms of his plea agreement, however, he was sentenced to 60 days in jail and one year of supervised release.  The maximum possible punishment was six months in jail, according to the information.

As Law&Crime previously reported, cellular phone footage made by another passenger shows the apparently alcohol-fueled altercation slowly devolve before spiraling fully out of control.

Police reportedly said that Berry ordered and quickly chugged two alcoholic beverages, requested a third drink, and then, seemingly upset at not being served quickly enough for his liking, brushed his empty cup up against a female flight attendant’s backside.

“Don’t touch me,” she said, later describing Berry’s use of the cup as “inappropriate” touching.

He was eventually served a third drink but immediately spilled it on himself and went to the bathroom to change, according to a CBS News report. Berry then emerged from the bathroom without a shirt on, and a flight attendant helped him get a new one from his carry-on luggage. Then he reportedly wandered around the cabin for roughly 15 minutes before he got “friendly” with a female flight attendant, the police said. Then he groped her breasts–following that up by groping the other female flight attendant’s breasts, according to a police report cited by CBS News.

He also reportedly shouted several insults at the crew and boasted of his parents having a net worth in excess of $2 million.

A male flight attendant was eventually called over to intervene. Berry punched him in the face, the police report said.

After that came the duct-tape.

He reportedly yelled “help” as the tape and a seatbelt extender were used to secure him in place.

Ultimately, the defendant was restrained by the male flight attendant and fellow passengers–activity that resulted in grounding pending an internal investigation by Frontier Airlines. The flight attendants were later placed on paid leave–after Association of Flight Attendants union president Sara Nelson publicly stood up for the flight attendants’ safety and criticized the airline’s response.

“If this is not immediately corrected, flight attendants may feel unsafe to come to work,” Nelson tweeted. “Management has a legal duty to maintain a safe work environment for employees.”

“My number role on any aircraft is to protect the passengers, including Maxwell Berry, who we did get to Miami safely that day,” Jordan Galarza, the punched flight attendant said in court on Tuesday, according to a report by Miami-based CBS affiliate WPLG. “You can say it looked a bit barbaric, but it worked perfectly and no one got hurt because of how we did what we did.”

Galarza and one of the groped flight attendants provided victim impact statements. Afterwards, they were not pleased with the court’s 60-day sentence.

“He made an enemy of everyone on that flight,” Galarza told WPLG reporter Annaliese Garcia. “The people on that aircraft saw justice happen — more than what we saw today. I think it’s a disgusting miscarriage of justice, in my opinion.”

Berry pleaded guilty in February of this year.

For the past few months, his defense team and prosecutors have been making their cases as to the length of time, if any, the defendant should spend behind bars. In one sentencing memorandum, Berry’s defense argued that a “non-incacerative sentence with special conditions is an appropriate sentence that is ‘sufficient but not greater than necessary’ to achieve justice in this case.”

The government won the day by reminding the judge that the maximum sentence here could have been far greater.

Scola reportedly told Berry that there is “no delete button” in his case and that people should know they can’t board planes and act the way he did. The judge also noted that flight attendants must feel safe in the sky.

The defendant must surrender himself to authorities by Aug. 1, 2022.

Read some of the case documents, including a factual proffer, below: