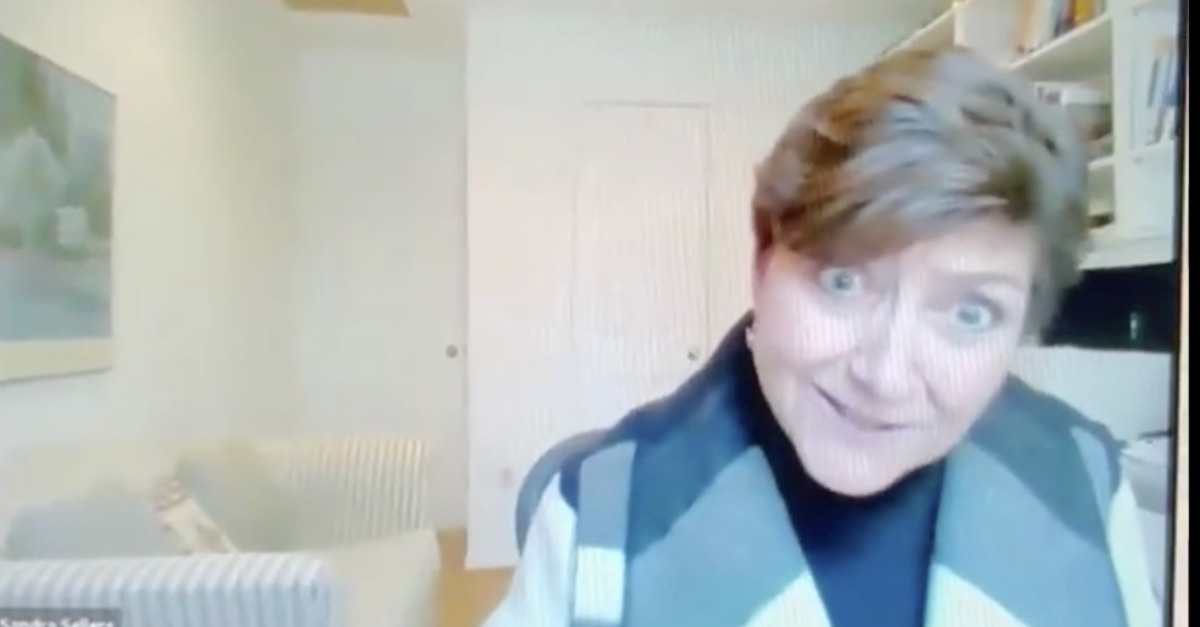 A Zoom call between two Georgetown Law adjunct professors captured on video has gone viral. The call shows the professors discussing the performance of Black students in what is being called a blatantly racist manner.

The video shows adjunct professors Sandra Sellers and David Batson discussing student performance, thinking the Zoom call was private. It was not private and it seems they did not realize the video was being recorded.

“They were a bit jumbled,” Sellers laughs. “That’s the best way I can put it,” she continues. “You know what,” Sellers says, “I hate to say this. I end up having this, you know, angst every semester, that a lot of my lower ones are Blacks. Happens almost every semester.”

“It’s like oh come on,” she chuckles, “some really good ones, but there are also some ones that are just plain at the bottom. It drives me crazy.”

Batson doesn’t say much during Sellers’ comments, but just nods along, with an occasional “yup.”

Predictably, Sellers’ comments made the rounds online, and the internet was not pleased.

Narrator: “She didn’t hate to say it.”

She feels super bad, I can tell. So very very bad.

As an alumnus of @GeorgetownLaw, I demand the IMMEDIATE termination of both of these “professors.” Anything less than that will lead me to call on other alumni to withdraw financial support to the school. These deplorable comments will not be tolerated. You’re on the clock.

Watch how the other professor just sits idly, offering no rebuke, content to let the lady’s racism stand. A wasted Batson challenge if I’ve ever seen one

This semester, Professor Sellers was recorded during what she believed was a private meeting with Professor David Batson, where the two were discussing a Black student’s performance in a course they taught jointly.

Professor Sellers was speaking in reference to the only Black student in her class. She stated that this Black student was being placed at the bottom of the grading curve for the class. The school has since taken down the recording after it was discovered and reported by a student.

In addition to the statement, BLSA circulated a petition calling for Sellers’ termination. “Not suspension. Not an investigation. The University must take swift and definitive action in the face of blatant and shameless racism,” the group demands.

Further, the other professor in the video, David Batson, initially nodded in agreement with several of Sellers’ statements. Batson subsequently stated that, “what drives [him] crazy is…the concept of how that plays out in whether that is [his] own perceptions playing in here with certain people” or “[his] own unconscious biases playing out in the scheme of things.”

The group further criticized Batson for his inaction both in the moment and in the aftermath.

“While these comments certainly show more awareness than that of Professor Sellers, his actions were still altogether insufficient to address the blatant racism that he was an audience to,” Batson “had an obligation to report her, and he did not,” reads the statement. BLSA demands that Batson publicly apologize.

Some have suggested that the professors’ conversation was not an anomaly. Slate‘s Mark Joseph Stern posted that a trusted source told him one of the professors made a racist remark in front of an entire class.

A source whose credibility I can personally vouch for has also told me that one of the professors in this video made a racist remark in 2016 to a student in front of the entire class. GULC was informed but the professors continued to teach. The student never participated again.

Georgetown Law School Dean William M. Treanor issued a response statement calling the professors’ statements “reprehensible,” and pledging that the school would respond to the incident “with the utmost seriousness.” Treanor said an investigation was already underway, and that the school “will act swiftly and seriously to address this incident.”

Law&Crime could not immediately reach the professors for comment.

Meanwhile, Georgetown Law students and graduates continue to reel from the event.

I worked my whole life to get into Georgetown Law. Sandra Sellers has reduced my classmates and I to “blacks” the “lower ones.” She is in charge of the grading of black students. She must be immediately terminated. https://t.co/ER4omR0ay4

My daughter has announced that she is taking her talents to…
Georgetown Law & Shool of Business for her MBA. She is a Graduate of Wharton UPenn undergrad. pic.twitter.com/KKU9QtNewh

I feel so damn guilty about being on our school’s Admissions Committee and bringing in students from underrepresented backgrounds to an environment with professors like this.

How many are having these conversations unrecorded?