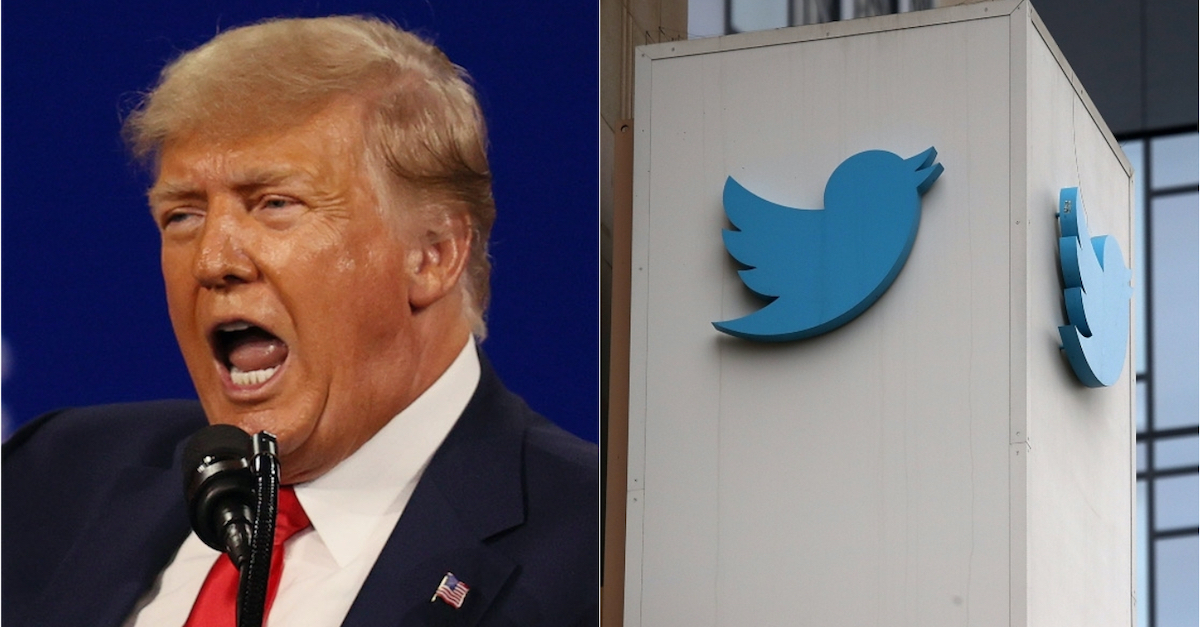 Former President Donald Trump, anti-vaccination activists and others cannot gin up a First Amendment lawsuit against Twitter for the decisions the private company made to suspend or ban their accounts, a federal judge ruled.

In July 2021, Trump originally sued Twitter in the Southern District of Florida, one of a spate of putative class action lawsuits against social media companies that kicked him off their platforms in the Jan. 6 attack on the U.S. Capitol. Florida influencer Linda Cuadros, who was booted from Twitter for a post about vaccines, was a co-plaintiff in an earlier version of the lawsuit, along with the American Conservative Union, an Alexandria, Va.-based dark money group that lost followers but was not kicked off the platform.

Twitter succeeded in moving that litigation to the Northern District of California, where the San Francisco-based company is headquartered.

In an amended complaint, other fringe figures joined onto Trump’s lawsuit. Feminist author Naomi Wolf noted that her account was suspended for propagating COVID-19 vaccine misinformation, and far-right radio host Wayne Allyn Root complained that he was banned permanently for his barrage of vaccine and 2020 election conspiracy theories. The two other named plaintiffs are Rafael Barboza and Dominick Latella.

As explained by Judge Donato, a Barack Obama appointee, Trump and his co-plaintiffs tried to argue that “Twitter was in effect operating as the government under the ‘state-action doctrine.'”

“This is not an easy claim to make, for good reasons,” the 17-page dismissal order states. “Private entities are presumed to act as such, and maintaining the line ‘between the private sphere and the public sphere, with all its attendant constitutional obligations,’ is a matter of great importance, as ‘[o]ne great object of the Constitution is to permit citizens to structure their private relations as they choose subject only to the constraints of statutory or decisional law.'”

In order to argue that Twitter was effectively acting as an arm of the state, Trump—the 45th president of the United States—cited the fact that some Democratic elected officials argued that his presence on the platform was harmful.

“The amended complaint merely offers a grab-bag of allegations to the effect that some Democratic members of Congress wanted Mr. Trump, and ‘the views he espoused,’ to be banned from Twitter because such ‘content and views’ were ‘contrary to those legislators’ preferred points of view,'” the ruling notes. “But the comments of a handful of elected officials are a far cry from a ‘rule of decision for which the State is responsible.’ Legislators are perfectly free to express opinions without being deemed the official voice of ‘the State.’ Government in our republic of elected representatives would be impossible otherwise. It is also not plausible to conclude that Twitter or any other listener could discern a clear state rule in such remarks, or even determine what a legislator’s ‘preferred views’ might be.”

The lawsuit also gunned after the Communications Decency Act’s Section 230, a statute often described as a backbone of free speech on the internet. The provision immunizes internet platforms for what third parties post. Trump has argued, falsely, that the provision promotes censorship by shielding social media companies from getting sued for content moderation. The law’s antagonists on the political left criticize the statute for shielding websites for hosting misinformation, harassment, and abuse on their platforms. As noted by legal experts, internet platforms would moderate content far more aggressively if they could be held liable for third-party content.

Ultimately, what scuttled Trump’s challenge against Section 230 was a more technical issue: the ex-president lacked standing to sue.

“Plaintiffs offer only the vague and speculative allegation that ‘[u]pon information and belief, defendants would not have de-platformed the plaintiff or similarly situated putative class members but for the immunity purportedly offered by Section 230(c),'” the ruling notes. “Why this might be plausible is left unsaid.”

The California federal judge rejected two claims brought under Florida state law, including one under Gov. Ron DeSantis’s (R) Stop Social Media Censorship Act, which was blocked by a different court as violating the First Amendment.

An attorney for Trump and the other plaintiffs did not immediately respond to an email requesting comment.