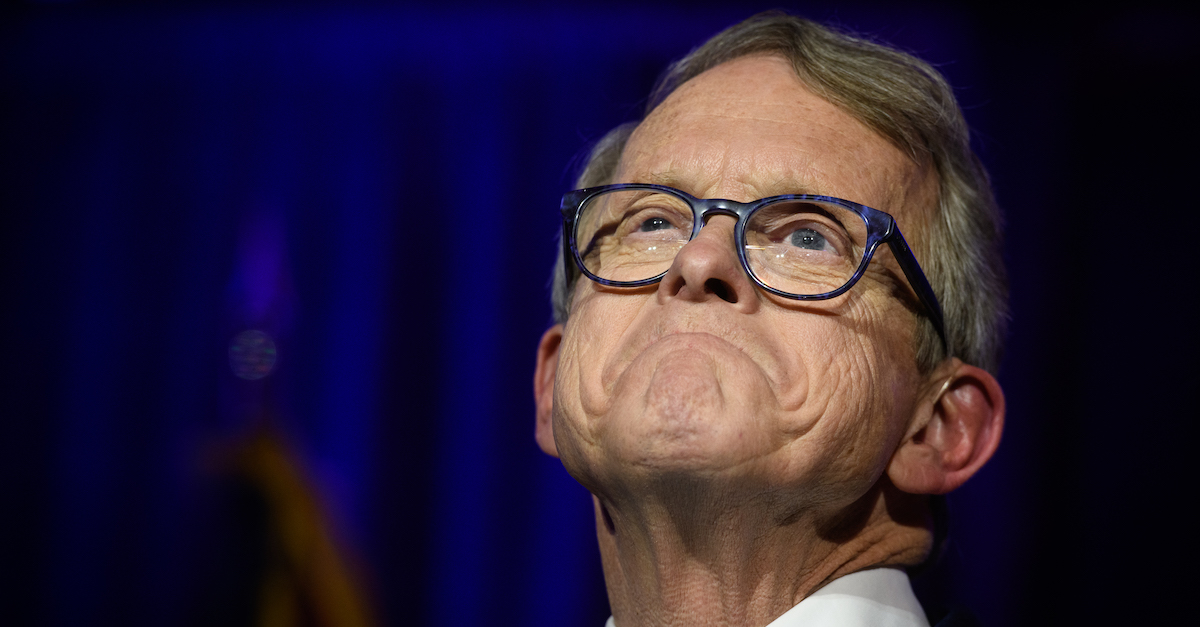 A coalition of GOP lawmakers in Ohio’s state legislature on Monday introduced Articles of Impeachment against the Buckeye State’s Republican Governor Mike DeWine, seeking to have him removed from office over his handling of the state’s pandemic response. The resolution—co-sponsored by state Reps. Nino Vitale, John Becker, Candice Keller, and Paul Zeltwanger–marks the first time Ohio’s House has taken an official step towards impeaching the governor in more than a century.

The lawmakers listed 10 articles of impeachment, accusing DeWine of assuming “dictatorial powers over the people,” violating separation of powers by permitting the Department of Health issue orders “tantamount to creating new laws,” and violating his oath of office by having “conspired with Secretary of State Frank LaRose to cancel the March 17, 2020, primary election.”

Under Ohio’s state Constitution, the House of Representatives have the sole power to impeach the governor if a majority of its members vote to advance the measure. Similar to the federal impeachment framework, a trial would be conducted in the Ohio Senate, where at least two-thirds of the senators would have to vote in favor of impeachment for DeWine to be removed from office.

Rep. Vitale said in May that he refused to wear a mask because he believes the image of God is “seen the most by our faces.” On Monday, Vitale said he did not believe that impeachment went far enough. He called for DeWine to be charged with crimes against humanity.

“Remember when all health care was shut down for 3 months because we were supposedly all going to die of Coronavirus? Well, many people are now sick; really sick. And they will need much more invasive treatment for what has turned into more serious health issues for them,” Vitale wrote on his official Facebook page.

Articles of Impeachment were announced today and I immediately co-sponsored them. I have received hundreds of calls to…

“Articles of Impeachment do not go far enough for me. While it’s a good step, Dictator DeWine needs to be charged and tried for crimes against humanity, in my opinion,” he said.

(Note: “crimes against humanity” is an international criminal law charge first adopted in the Nürnberg Charter for trying Nazi leaders and was later incorporated into the ICC’s Rome Statute. The charge entails systematic or widespread attacks, such as murder, rape, or enslavement, committed against a civilian population.)

In response to a user comment, Vitale also called for Ohioans to “revolt” against the state, saying he was “ashamed” to be a part of the government.

“Living in fear, many have turned to drugs and yes, even suicide, to end or tolerate the unbearable pain inflicted by the governor upon their livelihoods, and the damage caused by his unraveling of the fabric of Ohio. It is long past time to put an end to government gone wild,” Becker said.

“It is despicable that anyone who considers themself to be conservative would make an attempt to impeach Governor DeWine. In a time of harsh political division, and an important election year, Republicans should be united,” Timken said. “Ohio and the world have witnessed an unprecedented global pandemic – one that Governor DeWine has done a great job at leading us through. The attack by John Becker and his allies is a baseless, feeble attempt at creating attention for themselves, and it shifts the focus away from what should be the top priority for real Republicans: re-electing President Trump.”

Read the full Articles of Impeachment below:

DeWine Aricles of Impeachment by Law&Crime on Scribd