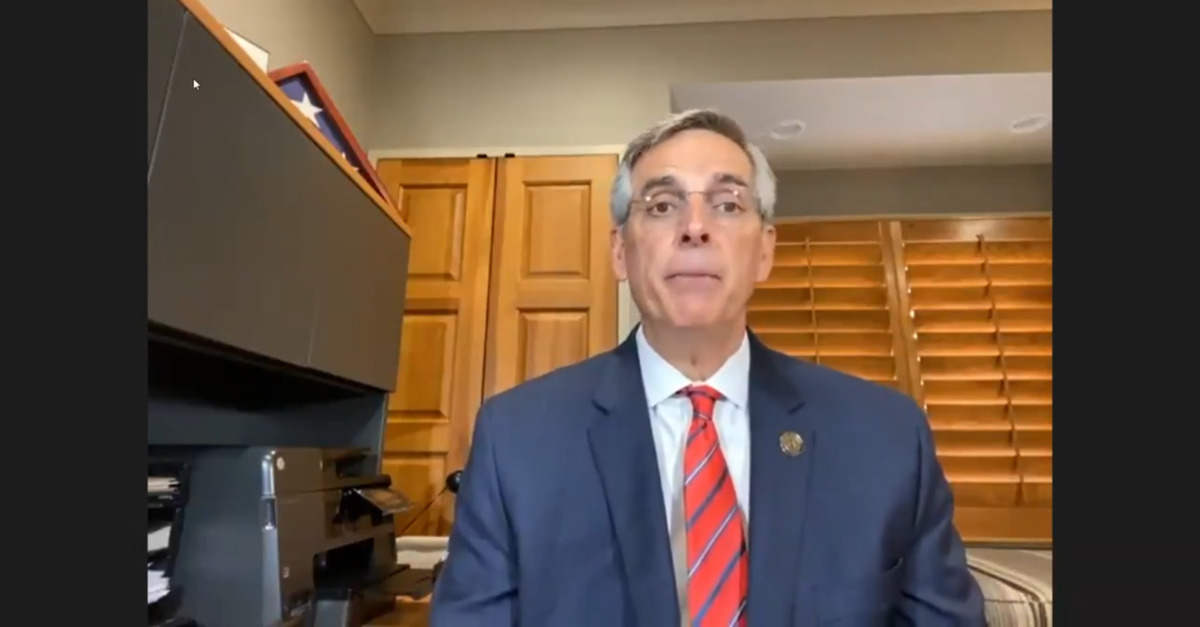 The source of Raffensperger’s claim is a marked, substantial–and electorally decisive–drop-off in Republican voting that occurred between Georgia’s primary held in early June and Election Day.

Specifically, the matter boiled down to some 24,000 mail-in/absentee ballots cast by voters during the GOP primary. Those voters ultimately did not show up at all during the general election.

“Those 24,000 people did not vote in the fall,” Raffensperger said. “They did not vote absentee because they were told by the president, ‘don’t vote absentee, it’s not secure,’ but then they did not come out and vote in person. He would have won by 10,000 votes. He actually depressed, suppressed his own voting base.”

David Nir, an elections analyst for pro-Democratic Party blog DailyKos, noted another intricacy as to how the severe drop-off occurred–placing some responsibility at the feet of the Georgia GOP and even Raffensperger himself.

“Part of this is also Raffensperger’s doing,” Nir said via Twitter. “He sent absentee ballot applications to all voters before the primary but, after facing severe attacks from fellow Republicans, declined to do so before the general.”

The Trump campaign’s own-goal in Georgia was widely ridiculed:

The Georgia Sec. of State was fully in the Trump camp before Lindsey Graham and other Trumpers began meddling in the Georgia election results. Now, he is coming forward with the truth behind why Trump lost Georgia. Love to see it. https://t.co/jAUeZuSBvl

Podcast host and national security expert Felix Biederman noted that blowback from Trump’s non-stop war on the basic concept of vote-by-mail was predicted by some members of his own party.

“[Rep.] Kevin McCarthy was right!” he tweeted–linking to an apparently prescient September warning by the House minority leader.

“We could lose based on that,” the California Republican said. “I tried to show him…you know who is most afraid of COVID? Seniors. And if they’re not going to go vote, period, we’re screwed.”

Others made that point as well:

Quite a few Republicans warned Trump this was a possible side effect of constantly trashing voting by mail during a pandemic. He did not listen. https://t.co/VjPTaoL2lY

As nearly every expert pointed out prior to the election, Trump’s actions to delegitimize the vote ignored the fact that his own supporters still needed to cast ballots. https://t.co/NjLROqxo8j

This is precisely what happened and it was in July that a 5-alarm siren was sounded within the GOP that Biden was trouncing them via early voting. Ergo, the desperate attempt to dismantle the USPS to prevent ballots from being received. https://t.co/NXPz8V1Kxz

Trump, Attorney General Bill Barr and the broader Republican Party, waged a months-long battle against mail-in voting once Democrats rallied around vote-by-mail in response to the coronavirus (COVID-19) pandemic.

In late March, Trump warned that “you’d never have a Republican elected in this country again” if the country switched to a national vote-by-mail system–which was interpreted as an acknowledgment that Democrats tend to win elections when voter turnout is high.

The president’s attacks on mail-in voting continued throughout the summer and the fall. Those efforts reached something of a head–or at least a political-cultural touchstone–when all available evidence tended to indicate that the United States Postal Service itself was being gutted from the inside-out in order to throw a wrench into the nation’s ability to process mail-in ballots.

Turnout in Georgia surged this year--and just barely enough among Democrats for Joe Biden to claim the state that has long and reliably voted Republican. The last time a Democratic presidential candidate won Georgia was Bill Clinton. That was in 1992.

Raffensperger’s analysis suggests that dire warnings about the GOP’s efforts to cast doubt on the reliability of mail-in voting were correct in the main. And that the 45th president was hoisted, as it were, from his own disinformation-fueled petard.