‘What We in the Legal World Call a Felony’: Lawyers Condemn Lindsey Graham, Call for DOJ and Senate Investigations 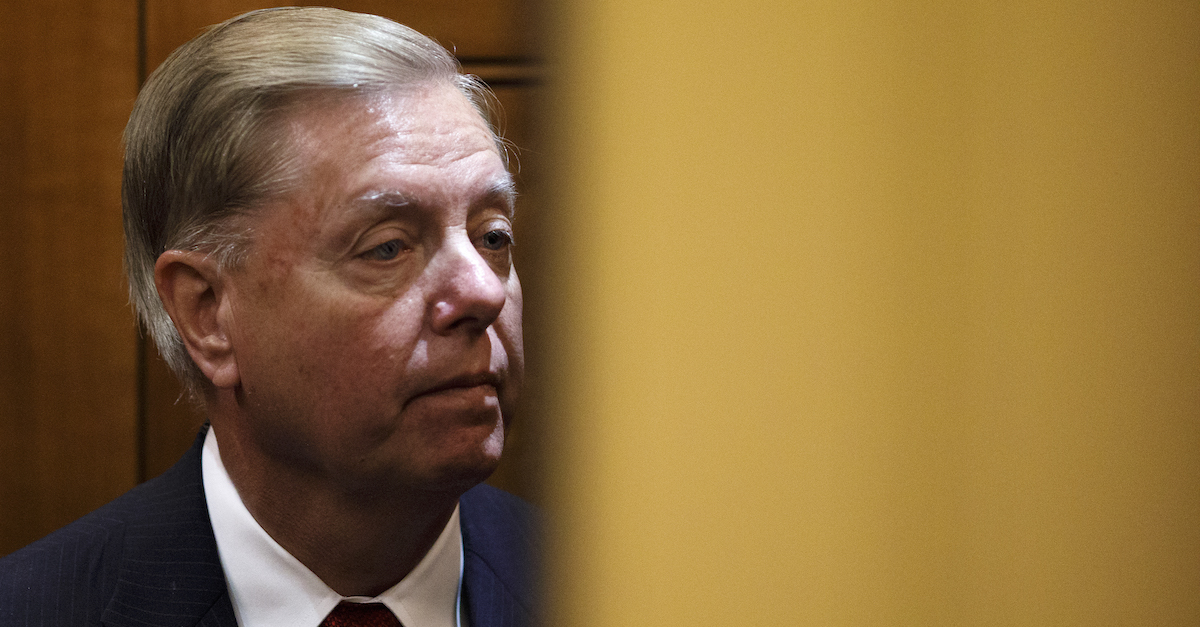 Sen. Lindsey Graham (R-S.C.) may have made a huge mistake. On Monday, the Palmetto State institution found himself in the middle of a scandal after Georgia’s Republican Secretary of State Brad Raffensperger accused Graham of asking him to throw out valid ballots in the Peach State during a recent phone call.

On Tuesday, the Wall Street Journal reported that Graham and Raffensperger actually spoke twice on the phone–on the same day. The request to toss ballots “from counties with higher rates of signature errors” reportedly occurred during the second call. And there was a witness during the call in question.

Gabriel Sterling, Georgia’s voting system manager, confirmed to NBC News that Graham brought up the subject of throwing out ballots from “whole counties” with high rates of signature rejections.

Questions immediately swirled–and so did the speculation.

“I wonder who Senator Graham spoke to between the two calls?” asked Citizens for Responsibility and Ethics in Washington (CREW) Research Director Robert Maguire via Twitter.

Former White House ethics attorney Walter Shaub was similarly interested and said that an investigation into Graham “is needed.”

That line of thought quickly picked up steam among legal experts.

“It is deeply troubling,” said Kristen Clarke of the Lawyers’ Committee for Civil Rights Under Law during a Monday evening appearance on MSNBC. “Here is something that the Justice Department should indeed open an inquiry into.”

“There is more than sufficient predication here to open a federal investigation,” asserted former U.S. Attorney and current University of Alabama Law Professor Joyce White Vance via Twitter on Tuesday. “Georgians [and] all Americans deserve to know what happened, not just be left to speculate over a matter so serious.”

Democrats were quick to accuse Graham of perfidy.

“This is both outrageous and should be investigated by the Senate Ethics Committee,” he tweeted on Monday evening.

“Did Lindsey Graham illegally pressure the Georgia Secretary of State to rig the election after the fact?” asked Rep. Hakeem Jeffries (D-N.Y.), a top ally to House Speaker Nancy Pelosi (D-Calif.) and himself a member of Democratic Party leadership via Twitter. “The Justice Department should find out.”

Others were a bit more forthcoming in their estimation of what Graham’s ask might actually mean in legal terms.

Andrew Weissmann, former top lieutenant to then-special counsel Robert Mueller, currently prone to shoot from the hip, decided to just say it outright: “This is what we in the legal world call a felony.”

An investigation into a sitting U.S. senator, a Republican at that, on voting fraud-related felony charges sounds a bit like a plot from an Aaron Sorkin creative effort where the Democrats ultimately decide to let the wayward GOPer off the hook. But partisans quickly pounced to heap scorn and downplay Graham’s alleged comments.

Liberal radio host and writer Joe Sudbay, however, interpreted that same interview a bit differently. He determined that Georgia’s top elections official was “standing by his remarks.”

Graham, for his part, attempted to defuse the tension caused by his conversations with Raffensperger by claiming there was nothing untoward going on–because he also recently talked to top elections officials in Nevada and Arizona. That excuse didn’t go over well.

Has Graham talked to the NC Board of Elections or the Florida Secretary of State, or is he just worried about election integrity in states Biden won https://t.co/k4ISSMV64l

Arizona’s Secretary of State Katie Hobbs (D) also had a problem with Graham’s claim about their would-be chat–she said it was false:

So this just happened.

Sen. Lindsey Graham tells reporters he’s also spoken to Secretary of State of Arizona (and Nevada). To normalize the idea of these communications?

Secretary of State of Arizona immediately responds that Graham’s statement is false.👇 https://t.co/widIyZYJFP

Nevada’s Secretary of State Barbara Cegavske, a Republican, also denied that she had spoken with Graham or any other members of Congress.

Lindsey Graham told me he doesn’t remember the names of the Nevada officials he spoke with, but Nevada’s Secretary of State says: “I have not spoken with Senator Lindsey Graham or any other members of Congress” about election results.

Some commentators took stock of a controversial post-Election Day memo issued by Attorney General Bill Barr, which authorized federal prosecutors to investigate “substantial” allegations of voting irregularities that occurred during the 2020 general election:

Still searching for evidence of attempts to interfere with election? Appears that Senator Lindsey Graham should be investigated immediately. https://t.co/V1Q23G2NSY

So this seems like something that would come under the guidance Bill Barr recently gave DOJ to investigate 👀 https://t.co/QvKO3nUUIx

“Not that I consider it remotely likely, but it would be an amazing turn of events if Barr’s authorization for U.S. Attorneys to take overt steps to prosecute election interference before the state certifications come in…results in the timely arrest of Sen. Lindsey Graham,” New York City-based attorney and author Luppe B. Luppen tweeted.

Sen. Graham, for his part, said that Raffensperger’s characterization of the call as a pressure campaign was “ridiculous.” He defended the call again on Tuesday when asked about it by CNN’s Manu Raju.

Asked why it’s appropriate for him to reach out to election officials in states where the vote is so close, Graham told me: “What I'm very concerned about is that if you're going to continue to vote by mail that we need to know what systems work and what don't.”