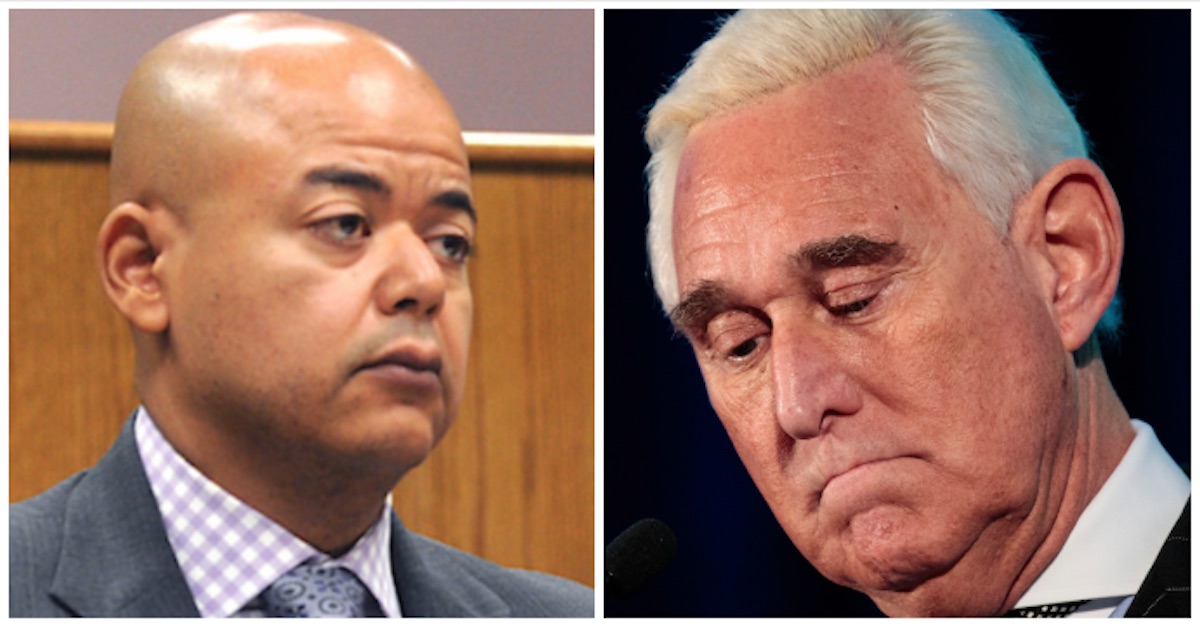 O.J. Simpson‘s Las Vegas-based lawyer Malcolm LaVergne had something to say on Tuesday about Roger Stone‘s self-inflicted Instagram post problem and the potentially humiliating encounter he’s going to have before a federal judge in a couple of days. LaVergne said that Stone is a “f*cking moron” who is “out of his element” and has more than likely driven his lawyers “insane” already.

What a complete f***ing moron this Roger Stone is. I guess he's always made money doing this kind of stuff, but now he's way out of his element. Now he's looking at being confined during the rest of his case. The stuff that will drive his lawyers insane! M. https://t.co/aa1XooTFPq

“What a complete f***ing moron this Roger Stone is. I guess he’s always made money doing this kind of stuff, but now he’s way out of his element. Now he’s looking at being confined during the rest of his case. The stuff that will drive his lawyers insane!” LaVergne remarked.

The comments represent the latest eye-popper regarding this situation, and there have been many in the last 24 hours.

First, Stone’s account shared the picture you see below and called special counsel Robert Mueller a “hitman,” while implying that Mueller is in cahoots with Judge Amy Berman Jackson to torment the enemies of Hillary Clinton.

Then Stone deleted the post because of outcry over the crosshairs in the upper left corner. The next image was also deleted and replaced with two screenshots of texts,   one claiming that the image of Jackson next to crosshairs was “misinterpreted,” that it was a “random photo” from the internet, and that any interpretation that this was a “threat” or “disrespect” is “categorically false.” The second image said “What some say are crosshairs are in fact the logo of the organization that originally posted it something called corruption central,” he said. “They use the logo in many photos,” he claimed (the origins of the Jackson image proved interesting). Both of the images included hashtags #rogerstonedidnothingwrong.

After hours of lawyers and law professors chattering that Stone might have committed a crime by threatening a federal judge, with others opining on the turn of events,  Stone’s lawyers took the extraordinary step of filing a notice of apology in court.

“Undersigned counsel, with the attached authority of Roger J. Stone, hereby apologizes to the Court for the improper photograph and comment posted on Instagram today,” Stone’s lawyers said. “Mr. Stone recognizes the impropriety and had it removed.”

They also included a signed apology from Stone on where he called this a “transgression.”

“Please inform the Court that the photograph and comment today was improper and should not have been posted,” the statement attributed to Stone said. “I had no intention of disrespecting the Court and humbly apologize to the Court for the transgression.”

Judge Jackson responded to all of this today and told Stone that he’s going to have to explain on Thursday why his pre-trial release shouldn’t be revoked over this stunt.

As for LaVergne, this was not the only time he’s weighed in on current events.