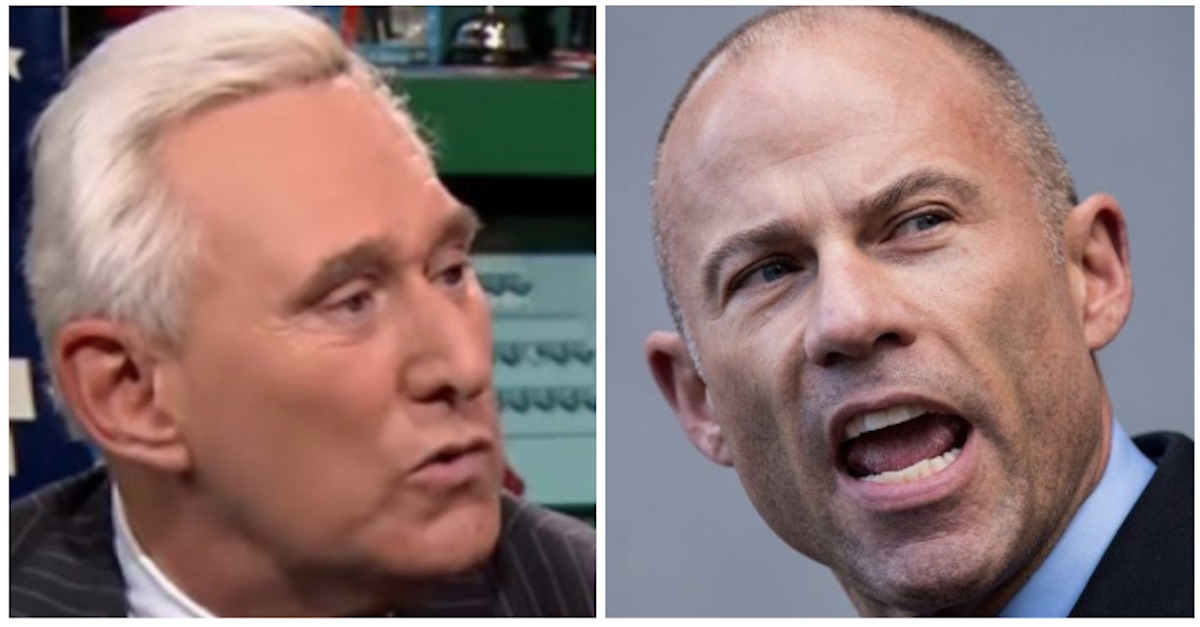 Earlier on Monday, Roger Stone‘s Instagram account posted not one but two pictures of the federal judge presiding over Stone’s case. Both photos were deleted. The first one featured Judge Amy Berman Jackson alongside crosshairs. The second one, just showed the judge and her name. Then, after a brief spate of hysteria ensured, with legal experts opining that Stone might have posted himself a one-way ticket to the slammer pending the outcome of his trial, Stone said that anyone who interpreted the images of the judge as a threat are wrong.

Okay, now you’re all caught up. Anyway, Stormy Daniels attorney Michael Avenatti, who is currently representing an R. Kelly accuser, was one of many reacting to Stone’s Instagram posts. He  was moved to say that Stone is a “100% bat shit crazy” individual and that this shouldn’t be perceived as a partisan statement.

Regardless of your politics, I think we should all be able to agree at this point, having seen Roger Stone’s public comments/threats regarding the federal judge assigned to his case, that Roger is 100% bat shit crazy.

“Regardless of your politics, I think we should all be able to agree at this point, having seen Roger Stone’s public comments/threats regarding the federal judge assigned to his case, that Roger is 100% bat shit crazy,” he said.

In case you missed it, the first Stone Instagram post contained text that described Special Counsel Robert Mueller as a “Deep State hitman” who convinced “Obama judge” Amy Berman Jackson to stay on the case against Stone — this after Jackson had recently decided, in Muller’s favor, that two cases are related.

Jackson agreed with Mueller’s argument that United States v. Netyksho — the case Mueller brought against Russian military officers who allegedly hacked the DNC in 2016 — was related to the case against Stone. In fact, Mueller said that evidence in the case against Stone came from a search warrant common to the two cases:

The government related this case to the earlier indictment returned in United States v. Netyksho pursuant to Local Criminal Rule 57.12(a)(1)(iii) as a prosecution against a different defendant that “arises from a common . . . search warrant” and from “activities which are a part of the same alleged criminal event or transaction.” In particular, evidence in this case was found in accounts that were subject to search warrants executed in Netyksho. Moreover, the alleged obstructive conduct in this case was directed at a congressional investigation into conduct that formed the basis for the criminal charges in Netyksho.

In the Instagram second post, Stone posted a picture of Jackson without the crosshairs and claimed she violated Paul Manafort’s constitutional rights by jailing him in advance of a conviction. Manafort, you may remember, was accused of witness tampering along with the Russian national Konstantin Kilimnik, who Manafort is alleged to have lied about. Thus, Manafort was jailed pending the outcome of his trial. He remains jailed pre-sentencing.

While Stone said in a follow-up post on his Instagram that the image of Jackson next to crosshairs was “misinterpreted,” that it was a “random photo” from the internet, and that any interpretation that this was a “threat” or “disrespect” is “categorically false,” it should be noted that this controversy happens just three days after Jackson denied Stone’s attempt to remove her from the case. It also happened days after all parties in the case were hit with a gag order.