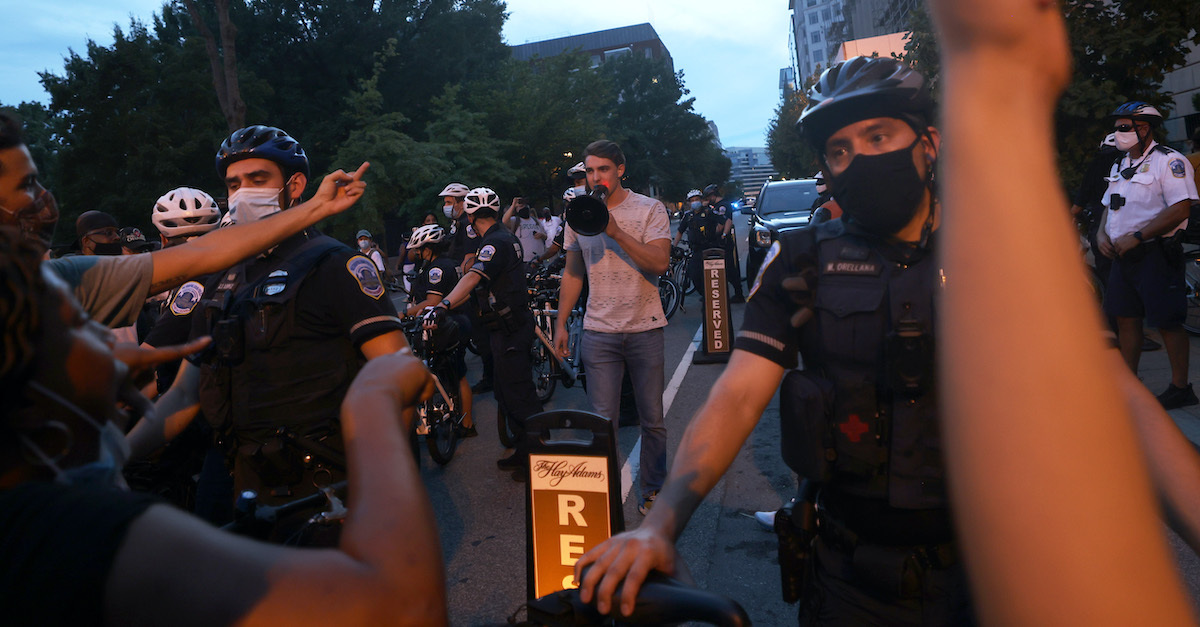 Conservative hoaxers Jack Burkman and Jacob Wohl notched a small but important victory in federal court on Friday afternoon as the judge overseeing their civil case in New York agreed to remove their names from a remedial message which they must send to the people of color they targeted with robocalls in an alleged effort to suppress the vote.

“It’s a huge victory for the plaintiffs and other voters who got the call,” said attorney Rachelle Navarro in an email to Law&Crime. “The intimidating effect of defendants’ robocalls on voters is not conjecture – the risk of intimidation is very real.  And today’s ruling reflects the court’s understanding of this.”

Senior U.S. District Judge for the Southern District of New York (SDNY) Victor Marrero issued the new remedial call language in a minute order released shortly after two early Friday hearings on whether or not the right-wing political operatives should be held in contempt for previously failing to comply with the court’s deadline.

The new remedial message is as follows:

At the direction of a United States district court, this call is intended to inform you that a federal court has found that the message you previously received regarding mail-in voting from Project 1599 contained false information that has had the effect of intimidating voters, and thus interfering with the upcoming presidential election, in violation of federal voting-rights laws.

The ruling comes as a blow to plaintiffs National Coalition on Black Civic Participation (NCBCP) who wanted to keep the defendants’ names in the curative calls.

Attorney Aaron Gold explained that “the names of the defendants will sufficiently tie” the two robocalls together and was adamant that simply mentioning Project 1599–the corporate organization used to place the calls–was not good enough.

Civil defense attorney David Schwartz countered that bridging the understanding gap between the two calls was relevant but must be “weighed against” the defendants’ constitutional rights. The defense has previously and forcefully argued that the court-ordered remedial calls are effectively admissions of guilt that will be unfairly used against them in their upcoming criminal trials.

Schwartz also disagreed with the suggestion offered by the plaintiffs that voters would necessarily need to hear Wohl’s and Burkman’s names to make the connection between the racist robocall and the curative call. The civil defense attorney insisted the NCBCP merely wanted “to prejudice” his clients.

The defendants’ criminal defense attorney Scott Grabel also offered a novel line of argument–saying that he recently spoke with authorities in Michigan who were leaning toward using the curative call in order to secure a conviction against Burkman and Wohl.

Marrero shot that down as well.

“It just doesn’t seem plausible that this issue is going to determine whether or not defendants are found guilty,” the judge said.

After a brief inquiry into whether the defendants would technically be able to place the remedial calls, Marrero conceded to the defense by agreeing to remove Wohl’s and Burkman’s name from the script.

“I am going to agree to a slight change in the language of the curative robocall to delete the reference to a political organization founded by Jack Burkman and Jacob Wohl,” the judge noted.

Marrero reasoned that the original language referred to the founders of the organization that placed the calls and had little-nothing to do with the “importance” and contents of the calls themselves.

The plaintiffs’ attorneys were audibly horrified by the judge’s quick turn toward the defense–after previously dismissing every single argument they put forward.

“We object to the removal of the language of the political organization founded by the defendants,” Gold said.

He argued that the prejudice alleged by Burkman and Wohl was “purely speculative” while the plaintiffs have, in their briefs, provided evidence of actual harm. To wit: one of the plaintiffs said they thought the call was important and true because it appeared to come from the 1619 Project.

“I am not persuaded,” Marrero said before adjourning the second digital hearing in the matter.

Given a 3 p.m. EST deadline to file a progress report “on the steps they have taken by then to distribute that message to the recipients of the prior robocalls,” the defendants’ second civil attorney Randy Kleinman filed a letter motion documenting their compliance.

Defendants retained the services of DialMyCalls, which has now completed the process of calling “all recipients of the prior robocalls stating: ‘ At the direction of a United States district court, this call is intended to inform you that a federal court has found that the message you previously received regarding mail-in voting from Project 1599 contained false information that has had the effect of intimidating voters, and thus interfering with the upcoming presidential election, in violation of federal voting-rights laws.”‘

According to a robocall vendor confirmation attached to the motion, Burkman and Wohl have made in excess of 29,000 remedial robocalls so far.

“Accordingly, defendants are in full compliance with the court’s order,” Kleinman and Schwartz averred.

Editor’s note: this story has been amended post-publication to include a response from the NCBCP’s legal team and for clarity.