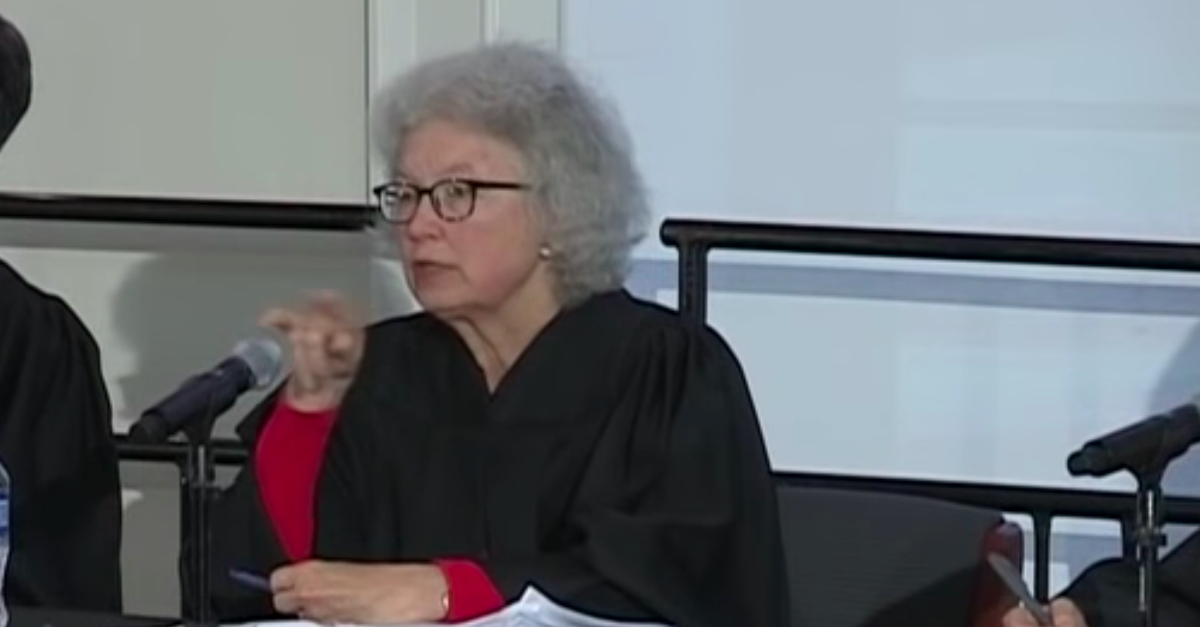 A pair of federal judges on Monday publicly aired their grievances when denying an Indiana prisoner’s appeal for compassionate release from prison over health risks posed to inmates by the COVID-19 pandemic.

Circuit Judge Karen Nelson Moore, an appointee of Bill Clinton, took to task her Sixth Circuit Court of Appeals colleague Circuit Judge Chad Readler, an appointee of Donald Trump, after Readler dismissed her use of infection rate statistics and death counts in her analysis in the case of Kwame Amin Mathews. Mathews is a federal inmate who six years ago “pleaded guilty to aiding and abetting the distribution of cocaine base,” was sentenced to 151 months in prison, and who now “suffers from multiple sclerosis.”

The opinion plays out somewhat like a dialogue, with Moore opening in the form of the court’s majority decision.

“By the end of 2020, one in every five persons incarcerated in the United States had tested positive for COVID-19,” Moore’s opinion began. “At least 275,000 imprisoned persons across the country have been infected; more than 1,700 have died. A court’s refusal to reduce an incarcerated person’s sentence could result in death.”

The statistics Moore cited were sourced from weekly databases kept by The Marshall Project and the Associated Press, which both derived the data from each federal prison agency and verified those figures with officials.

“In reaching that conclusion, however, the lead opinion covers ground that is neither necessary to the outcome nor joined by another member of the panel, making it dicta, and seemingly misplaced dicta at that,” Readler wrote. “One example is the opinion’s introductory paragraph, which frames the appeal by invoking prison-related data collected by the Marshall Project. As neither that data nor the means for collecting it are part of the record in this case, and thus unmeasured by federal evidentiary standards, the data’s value is difficult to assess.”

“As commendable as that mission may be, without prior admission and examination by the district court, I would not accept the Project’s agenda-backed reporting as informing how we should apply the federal criminal statutes at issue,” he wrote. “And I most certainly would not take the Project’s narrative as a basis to conclude that our ‘refusal to reduce an incarcerated person’s sentence could result in death.’ That statement, of course, should not be confused with today’s holding, let alone a standard district courts are to apply in weighing requests for compassionate release.”

Moore responded to Readler with a nearly page-long footnote that attorneys and legal observers referred to as “absolutely savage.”

I'd like to report a murder at the 6th Circuit. https://t.co/YajE0Wb5P2 pic.twitter.com/HJ4XhZISzW

“In what can only be described as dicta about dicta, Judge Readler diminishes COVID-19’s rampage in our federal prisons and assails The Marshall Project’s integrity,” Moore wrote. “We should not treat lightly the experience of persons who are incarcerated in prisons that are plagued with a deadly virus; nor should we demean those who advocate for imprisoned persons. Many compassionate-release motions implicate complex issues of law and policy that merit our attention. Contemplation of these issues aids our future reviews of compassionate-release motions.”

She defended her use of statistics, saying that “providing context when context matters is not misplaced,” before listing examples of previous instances in which Readler had used outside sources to contextualize an aspect of his opinions, including one in which he used HHS data to “clarify that manufacturing methamphetamine is dangerous,” as Moore put it.

“No reader would confuse the first three sentences of this opinion’s introduction with today’s holding, just as no reader would conflate an opinion’s policy reasons—which are not necessary to the outcome—with any legal standard,” she wrote, citing to several additional Readler decisions. “Yes, this introduction cites two statistics that were not in the record of Mathews’s case. Luckily, The Marshall Project and The Associated Press’s reporting is of a higher pedigree than the extra-record sources that some”—namely, Readler—”embrace.”

Moore then listed several of the more questionable sources Readler had cited to in recent opinions, including a blog post that claimed “baseball may forever be America’s pastime,” and another in which he “paraphras[ed] a Grateful Dead song.”

All three judges ultimately denied the appeal, reasoning that the district court did not abuse its discretion in denying the request for compassionate release. Senior Judge John M. Rogers, a George W. Bush appointee, merely concurred in the result.