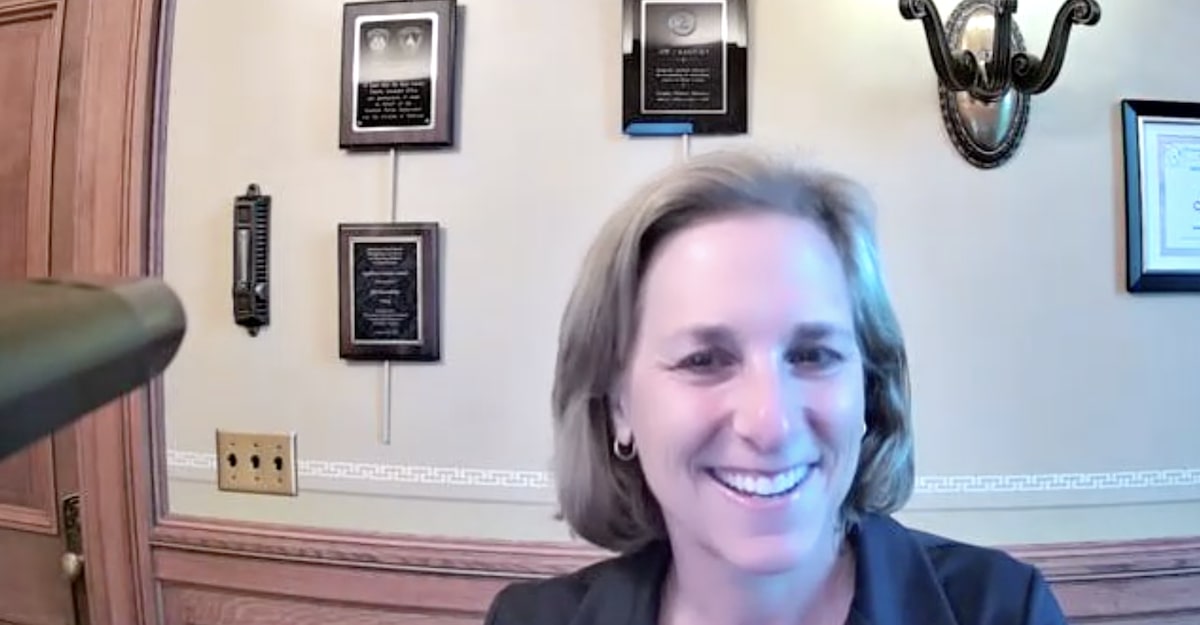 Wisconsin Supreme Court Justice Jill Karofsky, an ultramarathoner judge whose August 2020 election made her a deciding vote rejecting former President Trump’s lawsuit seeking to overturn the 2020 presidential contest in her state, sits for an interview for the Law&Crime podcast “Objections: with Adam Klasfeld.”

Elected in a landslide just months earlier to Wisconsin’s highest court, Justice Jill Karofsky vividly recalls the atmosphere of “intimidation” that greeted oral arguments on Dec. 12, 2020, the day that former President Donald Trump’s lawsuit seeking to overturn that case landed in her court.

The Zoom proceedings captured national attention as Trump’s then-ongoing legal blitz spectacularly failed in other courts, but Justice Karofsky recalled being well aware of an ominous demonstration boiling outside the view of the cameras.

“During the argument, as I looked out my window, there were armed protesters walking right outside of my window and walking around the Capitol during the oral arguments,” Karofsky recounted on Law&Crime’s podcast “Objections: with Adam Klasfeld,” during an exclusive interview nearly a year after the proceedings.

The Wisconsin Supreme Court operates from the second floor of the east wing of the State Capitol.

“When the arguments were over, I got a police escort to my car,” Karofsky continued. “I had a, you know, beefed up security for quite some time afterwards.”

Like public servants throughout the country, Karofsky and her colleagues faced torrents of threats and abuse for months to come.

“Fear That America Would Once Again Be Ruled by a Monarch”

If the demonstrators hoped to sway the Wisconsin Supreme Court justices into ruling in Trump’s favor, they would be sorely disappointed. The high court ruled 4-3 to reject Trump’s lawsuit, with conservative Justice Brian Hagedorn joining the liberal wing to preserve then President-elect Joe Biden’s victory.

Karofsky, who ran as a nonpartisan but was supported by the Democrats, would not be bullied by the armed assembly. She unloaded on Trump’s then-attorney Jim Troupis about the fact that he targeted only the state’s two most diverse counties, Milwaukee and Dane.

“This lawsuit, Mr. Troupis, smacks of racism,” Karofsky said last year, in a remark that made international headlines.

Her colleague, Justice Rebecca Dallet, noted that Trump sued none of the state’s other 72 counties, focusing only on the “most non-white, urban” areas, even though the lawsuit complained about forms used throughout the states. Trump’s legal team later complained about the remark to the then-GOP controlled Senate Homeland Security and Governmental Affairs Committee, but the Supreme Court of the United States refused to review the legal team’s allegations of bias.

In an interview, Karofsky called the remark fair game, as an attempt to give Trump’s lawyer a chance to explain why he chose not to sue whiter Wisconsin counties that conducted their elections the same way.

Just before arguments wrapped up, Karofsky provided an even more fiery quote.

“What you want is for us to overturn this election so that your king can stay in power,” she told Troupis. “That is so un-American.”

The remark fell less than a month before a pro-Trump mob tried to violently block the congressional certification of Biden’s victory by force during the Jan. 6 attack on the U.S. Capitol, but at the time, critics accused Karofsky of political bias and hyperbole.

For Karofsky, she was just trying to uphold the ideals of the Framers of the U.S. Constitution.

“What Alexander Hamilton wrote about in the Federalist Papers was the fear that America would once again be ruled by a monarch—by someone who was born into power, instead of someone who was elected by the people,” she noted. “And I think that courts—I think that anyone in public service—look, I think that every single American citizen has a duty to stand up and do whatever we need to do to protect our democracy.”

“The Lines in Milwaukee, Especially, Just Completely Blew Me Away”

Two days after oral arguments, the Wisconsin Supreme Court rejected Trump’s lawsuit by a razor-thin margin, even though every other state and federal court emphatically rejected the former president’s election-overturning efforts.

If Wisconsin voters had not braved a pandemic in August 2020, the outcome could easily have swung the other way, and Karofsky recalls that her prospects looked grim right before the contest. The state’s high court had just shot down an executive order by Gov. Tony Evers (D) to postpone the contest in light of the COVID-19 pandemic, and the judge feared that her supporters would stay home rather than risk their lives.

“I said to my kids, ‘Look, I don’t see a path forward for us. I want to talk about this tonight. I love you kids. You have been warriors, and they had been warriors. And I said, it’s going to be okay,'” she reflected.

The pep talk bracing her children for defeat had been premature.

“Then I woke up the next morning, which was the day everyone was voting, and I went for a run, and I came home, and I was my phone was just blowing up with all these pictures of these brave people who are going out to vote in the midst of a pandemic,” Karofsky said.

Turnout was especially startling in one of the counties whose 2020 general election Trump tried to negate.

“The lines in Milwaukee, especially, just completely blew me away,” Karofsky said.

That she learned about her election during a morning run is no surprise. An avid runner, Karofsky was sworn into office at mile 35 of a 100-mile ultramarathon. A database on a popular ultramarathon running website shows that Karofsky has run at least 25 trail races, most of them more than marathon distances. Of those races, she has run faster than roughly 70 percent of participants and 80 percent of fellow runners in her age and gender.

She acquired her lifelong passion from her mother Judy Karofsky, a pathbreaking mayor for the Wisconsin city of Middleton.

“She was actually one of the first women mayor’s in the state of Wisconsin,” Justice Karofsky said, adding that her mother started running shortly after her mayoral election in 1974. The mother brought her then-10-year-old daughter with her—and instilled an enduring love for physical and political races.

“Public service was a big deal in my family,” Justice Karofsky reflected.

For the judge, public service after the Trump presidency has not been without its challenges. She and Justice Dallet were subjected to vicious antisemitic abuse after oral arguments.

“I don’t answer my own phone here at the Capitol, and I wasn’t listening to the messages someone else did that for me,” she said. “Someone else was was looking at the internet.”

What they found was startling: The white supremacist website Daily Stormer referred to Karofsky and Dallet as “Wisconsin Jews,” flinging antisemitic conspiracy theories accusing them of being part of a cabal to invoke racism against white people. The abuse got so bad that the Wisconsin Supreme Court’s Chief Justice Patience Roggensack issued a statement denouncing it.

Even though Trump’s Wisconsin lawsuit did not allege fraud by individual voters, multiple voicemails gave her an earful of conspiracy theories claiming otherwise.

Facing weeks of heightened security, Karofsky recalled that these threats felt all the more palpable “three weeks later, when the insurrection happened at the US Capitol.”

“It made all of those threats seem that— the threats themselves were always real, but the potential for someone to actually carry them out felt much much closer than it had already felt,” she said. “And it already felt way too close.”