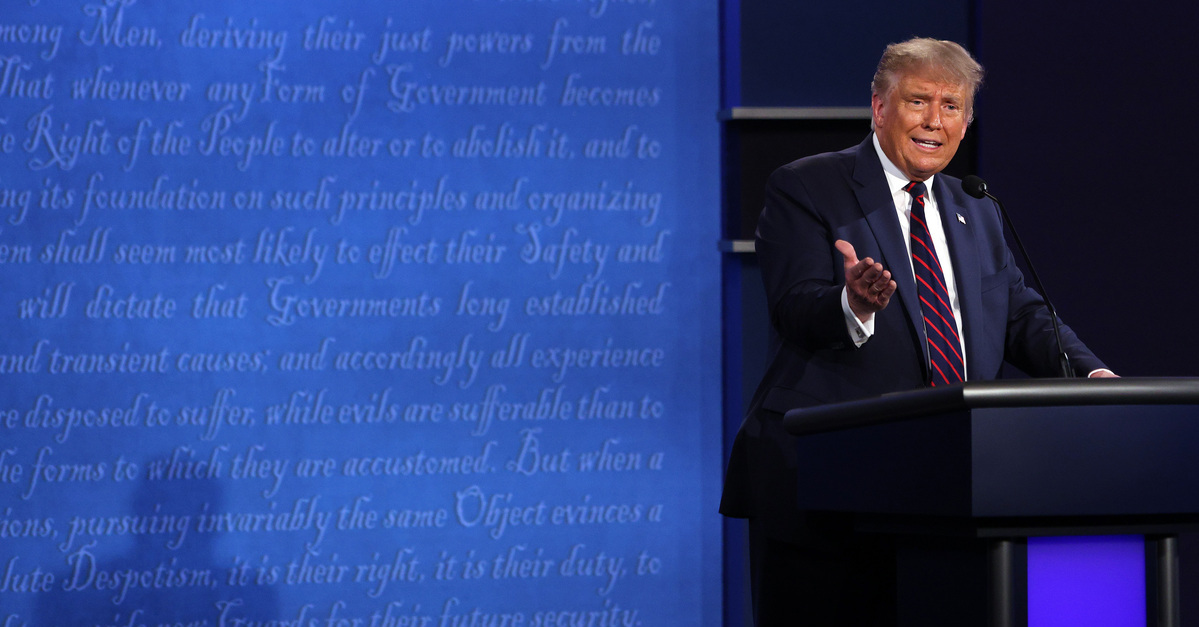 Every day is a winding road that gets the nation a little bit closer to the 2020 general election–and with this swift passage of time, further enmeshed in the Republican Party’s increasingly “fanciful” ideas, theories and outright false stories about electoral fraud. Those tall tales are getting so big and so bad, however, that even some Republicans are apparently feeling the need to weigh in against them.

President Donald Trump shared one such fake anecdote during the chaotic first presidential debate on Tuesday night between himself and former vice president Joe Biden.

To hear the 45th president tell it, several “mailmen” in West Virginia were caught selling ballots and also dumping them in rivers.

Debate moderator Chris Wallace posed a question about the millions of mail-in ballots that are currently in the process of being mailed–or that have already been mailed to voters. After initially suggesting he would expect the conservative majority Supreme Court to settle any potential dispute over those ballots, Trump moved on to the fraud angle he tried to exemplify by referencing alleged shenanigans in the Mountain State.

“They have mailmen with lots of it,” the president incorrectly insisted. “Did you see what’s going on? Take a look at West Virginia, mailmen selling the ballots. They’re being sold. They’re being dumped in rivers. This is a horrible thing for our country.”

In fact, only one letter carrier for the U.S. Postal Service (USPS) has been charged with an election-related crime in West Virginia during the current 2020 election cycle. And those charges have nothing to do with selling ballots–or specifically with ballots at all.

In May of this year, USPS employee Thomas Cooper pleaded guilty to attempted election fraud after he changed party affiliation boxes on primary ballot request forms from Democrat to Republican. Cooper was not alleged to have sold anything by federal prosecutors and there were also no references to any rivers in his indictment.

According to court documents obtained by Law&Crime, the letter carrier was charged with violating 52 U.S.C. § 20511(2)(B).

The statute penalizes anyone who “knowingly and willfully deprives, defrauds, or attempts to deprive or defraud the residents of a State of a fair and impartially conducted election process, by . . . the procurement, casting, or tabulation of ballots that are known by the person to be materially false, fictitious, or fraudulent under the laws of the State in which the election is held.”

According to a press release from the U.S. Department of Justice (DOJ), Cooper admittedly changed party affiliations as a “joke.”

Trump’s false recollection of the Cooper prosecution likely sailed by most viewers and commentators due the president’s highly-criticized and often hectoring debate performance–but it did not escape authorities in West Virginia.

In a press release, West Virginia’s Republican Secretary of State Mac Warner seemingly attempted to thread the needle by both correcting Trump and endorsing his general narrative about the likelihood of fraud.

“Today, West Virginia Secretary of State Mac Warner offered clarification to comments made by the President in Tuesday night’s Presidential Debate,” the release from Warner’s office begins. “While the debate covered various election issues throughout the U.S., Warner made clear that West Virginia experienced a unique circumstance where a postal carrier altered absentee ballot applications, not ballots.”

“The timely prosecution of election fraud in the 2020 Primary election cycle in West Virginia shows that we take election fraud seriously, that the system we have in place works well,” Warner said in the release. “Voters should be confident that this election will be safe, secure, and fair.”

“This was a prime example of a dedicated clerk, closely watching her election process, and quickly reporting an anomaly as she had been trained to do,” he added–referring to the Cooper incident. “The system worked, and we were able to rapidly assure the voters of West Virginia that the election was secure.”

His statement went on to somewhat validate Trump’s general concerns, however:

Warner said that he shares the President’s concern over the potential for increased election fraud with the increase in absentee voting and in those vote-by-mail-only states where millions of ballots are mailed to voters who haven’t requested them. However, Warner said that states can mitigate the increase in possible election fraud with effective strategies to deter, investigate, and prosecute those who would attempt to cheat.

Notably, Trump’s  story about the postal worker tracks closely to a recent hypothetical situation dreamed up by Attorney General Bill Barr–wherein a USPS employee would take part in election fraud in exchange for “a few hundred dollars.”

“You know liberals project,” Barr said during that same interview.