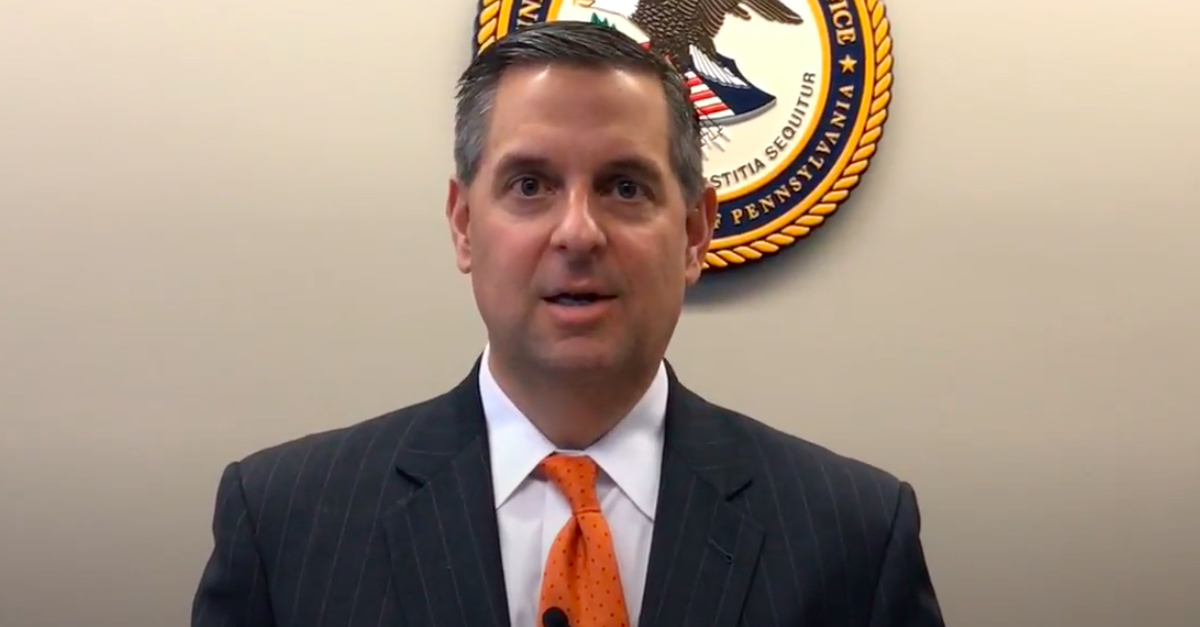 U.S. Attorney David Freed on Tuesday announced his resignation after three years running the federal prosecutor’s office for the Middle District of Pennsylvania. The departure of President Donald Trump’s appointee comes approximately three months after Freed caused a national stir by issuing a misleading and inaccurate statement about the discovery and subsequent investigation of discarded military mail-in ballots in Luzerne County. The president promptly used that statement to amplify his false claims about voter fraud.

“I have done my best to be thoughtful and consistent, and to provide justice to my fellow citizens in a fair, effective and efficient manner. I am grateful to President Trump and Senators [Pat] Toomey and [Bob] Casey for the opportunity to serve; and to former Attorneys General [Jeff] Sessions and [Bill] Barr for their leadership of the Department,” Freed said. “I have had the incredible opportunity to work with our brave men and women in law enforcement nearly every day for the past 20 years and continue to be amazed by their commitment to their fellow citizens.  I have witnessed first-hand the fortitude and grace of victims of crime, and have taken to heart the awesome responsibility of speaking for those who cannot speak for themselves.”

Freed’s resignation announcement touted many accomplishments, but the events of Sept. and Oct. 2020, which led to harsh criticism of the U.S. Attorney and his office, were not numbered among them.

In a Sept. 24 statement, Freed’s office declared that federal authorities had recovered nine previously discarded mail-in ballots from members of the military, initially claiming that “all nine ballots were cast for presidential candidate Donald Trump.”

The president, surrounded by reporters, immediately touted the statement as “evidence of a whole big scam” to rig the election against him. But minutes later, the Department of Justice walked back its announcement, saying only seven of the nine ballots were cast for the sitting president.

The following day it was revealed that then-AG Barr had “personally briefed” Trump about the DOJ’s investigation into the ballots, which the president and his supporters, including the White House press secretary, used to buttress erroneous claims of widespread voter fraud. As previously reported by Law&Crime, Barr was made aware of the investigation in Luzerne County after the U.S. Attorney’s Office for the Middle District of Pennsylvania “sought guidance” from Main Justice on what steps to take going forward.

The eventual response was severely bungled. In a pair of statements that were resoundingly criticized by election law experts as “wildly improper,” the U.S. Attorney’s Office initially declared that all nine of the recovered ballots “were cast for presidential candidate Donald Trump,” which was inaccurate.

“Of the nine ballots that were discarded and then recovered, 7 were cast for presidential candidate Donald Trump,” Freed clarified. “Two of the discarded ballots had been resealed inside their appropriate envelopes by Luzerne elections staff prior to recovery by the FBI and the contents of those 2 ballots are unknown.”

In a letter, Freed said his announcement detailing the pending investigation was made “based on the limited amount of time before the general election and the vital public importance of these issues […].”

This incident quickly turned into a talking point for the Trump campaign, but Pennsylvania election officials said just days later that all indications were that the incident was a “bad error” but not an “intentional fraud” attempt. The error cost the unidentified “temporary seasonal independent contractor” their job, and Luzerne County Manager David Pedri said the discarded ballots in question would be still counted.