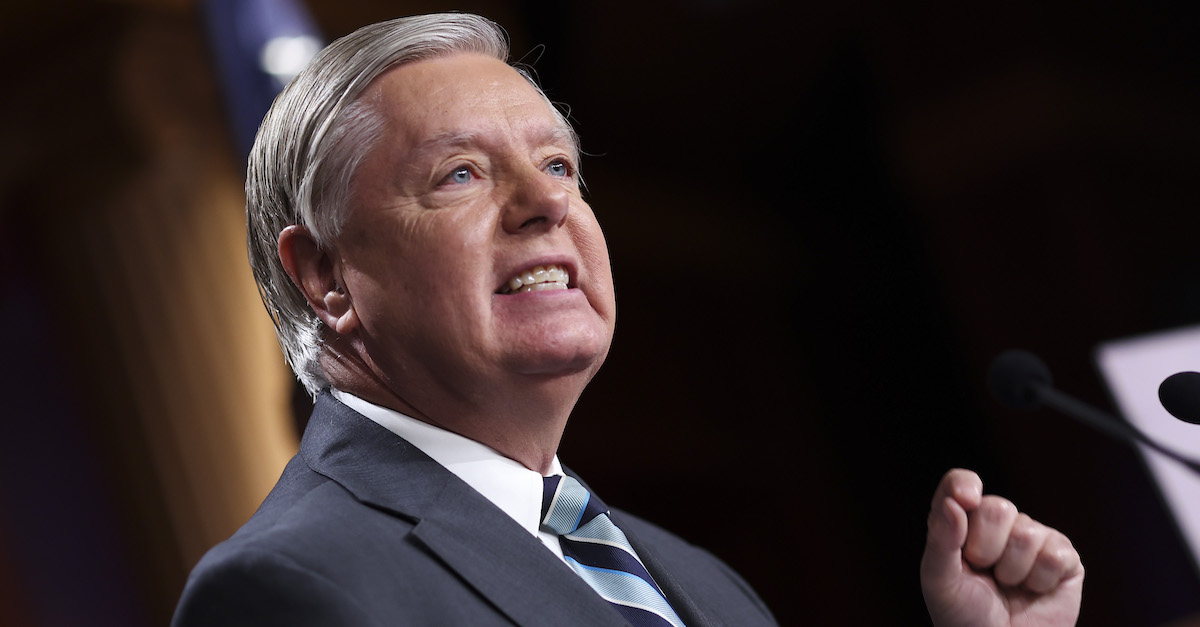 WASHINGTON, DC – AUGUST 05: U.S. Sen. Lindsey Graham (R-SC) speaks at a press conference at the U.S. Capitol on August 05, 2022 in Washington, DC. The group of Republican Senators held the press conference to speak out against the Democrats’ tax and spending policies. (Photo by Kevin Dietsch/Getty Images)

Sen. Lindsey Graham (R-S.C.) must testify before a special grand jury in Georgia investigating efforts to overturn the 2020 presidential election — but questioning may not veer into areas that encroach upon his legislative duties, a federal judge ruled on Thursday.

“After due consideration, the court again declines to quash the subpoena in its entirety,” U.S. District Judge Leigh Martin May wrote toward the beginning of a 23-page order.

In his motion to quash the subpoena, Graham claimed to be “immune” from testifying in a probe about efforts by former President Donald Trump and his loyalists to subvert Joe Biden’s victory in Georgia. His attorneys argued that such testimony would be barred by the U.S. Constitution’s speech or debate clause.

Though Graham framed these calls innocently as part of oversight duties as a lawmaker as then-Chairman of the Senate Judiciary Committee, the DA’s office said the Republican was simply seeking a “more favorable outcome” for Trump.

The judge overseeing the motion to quash split the difference, setting boundaries for the senator’s questioning.

According to the ruling, prosecutors cannot ask Graham about his “investigatory fact-finding on the telephone calls to Georgia election officials, including how such information related to his decision to certify the results of the 2020 presidential election.”

“The Court finds that this area of inquiry falls under the protection of the Speech or Debate Clause, which prohibits questions on legislative activity,” the order states.

The U.S. Constitution’s speech or debate clause states that members of Congress “shall not be questioned in any other place.”

“As to the other categories, the Court finds that they are not legislative, and the Speech or Debate Clause does not apply to them,” the order continues. “As such, Senator Graham may be questioned about any alleged efforts to encourage Secretary Raffensperger or others to throw out ballots or otherwise alter Georgia’s election practices and procedures. Likewise, the grand jury may inquire into Senator Graham’s alleged communications and coordination with the Trump campaign and its post-election efforts in Georgia, as well as into Senator Graham’s public statements related to Georgia’s 2020 elections.”

Graham sought much broader relief, but the judge suggested that the senator asked the court to assume too innocent a motive.

“As the Court has previously indicated, the calls themselves — again, calls between a U.S. Senator from South Carolina and Georgia’s state election officials — are not manifestly legislative on their face,” the ruling states. “Indeed, though Senator Graham frequently argues that the court would easily conclude that the calls themselves are obviously legislative if the Court properly applied the test and ignored all suggestions of motive, it is, in fact, Senator Graham who asks the court to accept his proposed motive (to carry out an individual investigation so as to inform his choice to certify the election) in assessing whether the calls constitute only legitimate legislative activity.”

In fact, the judge said, Supreme Court precedent barred consideration of motives at all.

“Senator Graham may be questioned about any alleged efforts to ‘cajole’ or encourage Secretary Raffensperger or other Georgia election officials to throw out ballots or otherwise alter Georgia’s election practices and procedures,” the ruling says. “Likewise, the grand jury may inquire into Senator Graham’s alleged communications and coordination with the Trump campaign and its post-election efforts in Georgia, as well as into Senator Graham’s public statements related to Georgia’s 2020 elections.”

In a statement, Graham celebrated what he cast as a victory — and signaled an appeal.

“We are pleased that the district court recognized that Senator Graham’s testimony is protected by the Speech or Debate Clause,” the senator’s office wrote in an unsigned statement. “He will continue to defend the institutional interests of the Senate and the Constitution before the Eleventh Circuit.”